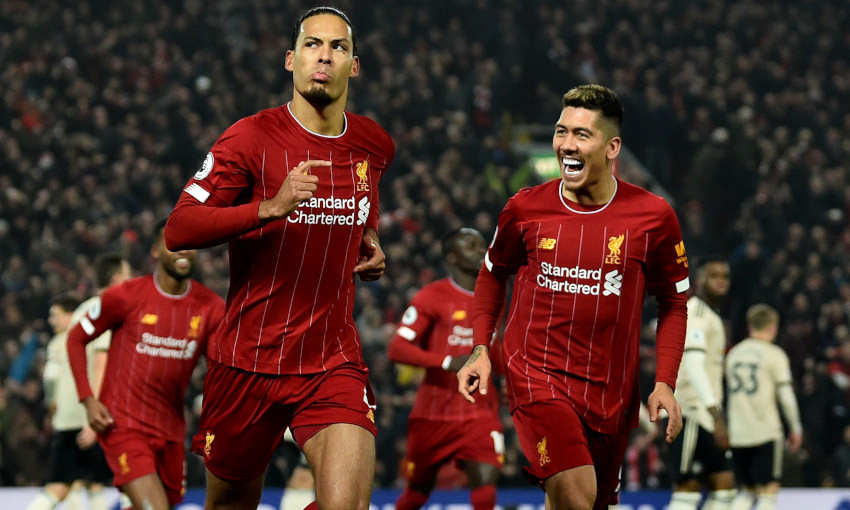 Liverpool edged out Manchester United 2-0 at Anfield to go 16 points clear at the top of the Premier League table on Sunday.

Virgil van Dijk thumped the Reds into the lead on 14 minutes when he powered Trent Alexander-Arnold’s corner beyond David de Gea.

Roberto Firmino had an effort ruled out by VAR soon after, while Jordan Henderson watched a strike pushed onto the post by De Gea in the second half.

The visitors pressed for an equaliser in the final stages, but the home side made certain of maximum points in the third minute of stoppage-time when Alisson Becker sent Mohamed Salah through on goal – and the Egyptian duly sent Liverpool 16 points in front with a low finish.

Liverpool named an unchanged line-up, electing to field the same starting XI that took to the field in last weekend’s 1-0 win at Tottenham Hotspur.

However, Fabinho and Joel Matip were back on the substitutes’ bench after recovering from their respective injury issues.

With Liverpool’s nearest challengers in the table both dropping points over the course of the weekend, a raucous atmosphere inside Anfield greeted kick-off as the hosts set about strengthening their grip at the summit.

United, though, were so far the only team to prevent the Reds from winning in their previous 21 top-flight outings in 2019-20.

Nevertheless, the home team made the start they craved when Van Dijk crashed in the opening goal with a header from a corner in the 14th minute following an even start.

United required the intervention of Luke Shaw and then VAR to deny the Reds a second soon after.

The visiting defender produced a last-gasp challenge to prevent Sadio Mane a clear strike on goal. A Firmino effort was then chalked off by officials in Stockley Park after it was deemed Van Dijk had impeded De Gea in the build-up.

Georginio Wijnaldum also had the ball in the net when he finished neatly from an Alex Oxlade-Chamberlain through ball; however, celebrations were cut short by the raised flag of the referee’s assistant.

United fashioned an opportunity to draw level as the interval approached when Aaron Wan-Bissaka touched an Anthony Martial ball across the face of goal, but Andreas Pereira couldn’t reach it inside the six-yard box.

At the other end, Salah sent Mane bounding into the area. De Gea repelled his low drive with his right boot, ensuring Liverpool’s advantage remained at one goal at the interval.

The Reds picked up where they left off as the second period got under way – and they should have been further ahead inside two minutes of the re-start; however, Salah miscued when Andy Robertson’s low delivery arrived at his feet.

Either side, Henderson’s drive was blocked by Harry Maguire and Mane hoisted over from inside the area.

Liverpool’s captain was then left clutching his head in his hands as De Gea tipped his run-and-shot onto the post, with the hosts coming closer and closer to a second.

Indeed, the Reds registered seven attempts at their opponent’s goal in the first 10 minutes of the second half. Fred did threaten when a United counter resulted in the midfielder prodding wide of Alisson's near post from just inside the box.

Martial had an even better opening on 59, but slashed well wide of the frame of the goal after collecting Pereira’s pass.

Mane then slid a low effort narrowly wide of the upright before Adam Lallana replaced Oxlade-Chamberlain.

Having weathered the early second-half pressure on their goal, United were by now giving Liverpool something more to consider defensively as they probed in search of a leveller.

With just under 10 minutes left on the clock, Mane and Firmino made way for Divock Origi and Fabinho as a frenetic finale ensued.

But it was to be Liverpool’s day as Alisson sprang a counter-attack from a visitors’ corner, sending Salah clean through to finish and increase Jürgen Klopp’s side’s lead in the game and in the table.