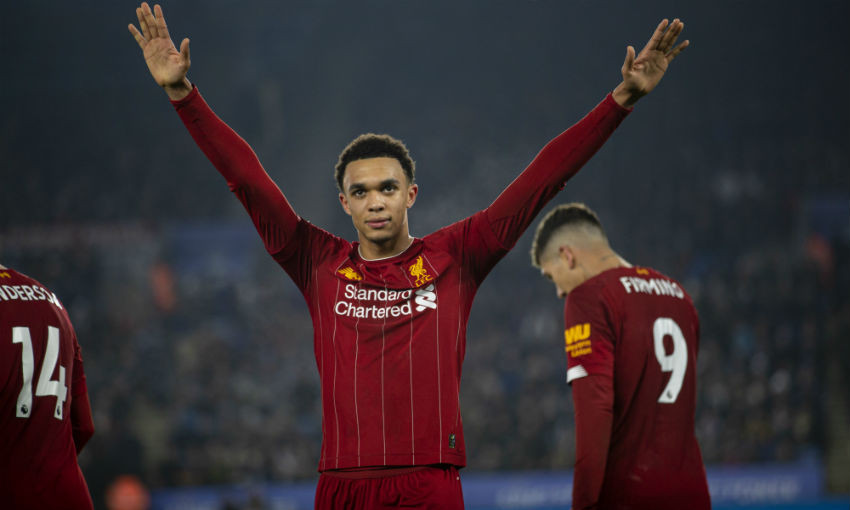 Jürgen Klopp: It's in our gift to view pressure as a positive

For Trent Alexander-Arnold, assisting a goal is just as satisfying as the act of putting the ball in the back of the net.

It's a special feeling the 21-year-old full-back has experienced frequently over the past 16 months.

Since the start of last season, no player in the Premier League has racked up more assists than the England international's 20 in the competition.

A Man of the Match performance away to Leicester City on Boxing Day saw Alexander-Arnold add to that tally, with the Academy graduate also on the scoresheet in the 4-0 victory.

Read on below as Liverpoolfc.com sat down with the No.66 to review his spectacular display against the Foxes and look ahead to the upcoming encounter with Wolverhampton Wanderers at Anfield on Sunday.

Trent, have you ever had a game like the Leicester one before where everything you've tried has come off to such devastating effect?

I think Watford at home last season when I got three assists, that's probably the one that has come closest to that. But to get a goal as well was special and always makes it better. I'd say yesterday was probably the best output attacking-wise that I've had in my career so far.

By recording those two assists, it seems like you can just put the ball exactly where you want it to go. Just how do you do that?

Obviously it's the movement of the attackers really. We've been playing together for a while now, so you know where players want it and you know in different areas where you should be putting the ball. Obviously the second assist was a bit further down, so it was a bit more of a cut-back. Whereas the first one was a bit deeper, so it was more whipped into the back post. Just to use the ball, switching it up and gauging where the defence is. If the defence drops a lot then there'll be space around the penalty spot. If they keep a high line then there's space in between their 'keeper and the defensive line. It's about picking the area and seeing where they are. Obviously then it's about the lads to finish them. Luckily we've got the front three that are devastating.

And your different types of delivery – whipped, curled and drilled – is that just natural ability or from studying others and hard work on the training ground?

I think it's just about replicating the players that I wanted to be when I was younger – the likes of Gerrard, Alonso, who were unbelievable passers of the ball. I always wanted to be able to pass a ball like that. Obviously I still look up to them massively and sometimes I still find myself watching clips of them – especially Gerrard, I always watch his old clips, his old games. He's someone that I still look up to now and still an idol for me. It's just growing up wanting to be them. I was practising a lot on my passing and for me it's paid off and I'm reaping the rewards now.

You do score goals, but what are your emotions when you’ve grabbed an assist? For you, is it just as satisfying as scoring?

It is. It's different because it feels as though you've had a part to play in the team and you feel like you've done something that's contributed massively for the team. It's an amazing feeling, it's almost like scoring a goal, to be fair. I've had quite a few assists over the last few months and in the last year or so, so I've been able to have that feeling quite a bit and hopefully there'll be a lot more of them sort of feelings.

You and Andy Robertson are lauded for your work in the final third. But that's three clean sheets in a row in the Premier League now. Is that something you take just as much pride in?

That's massive. Because if you keep a clean sheet, that's the foundation that you need to build on to get a result. We know the attacking strengths that we've got. By keeping a clean sheet, more than likely we'll create chances at the other end to score goals and win the game. That's what matters to us.

Praise was coming in for you from every direction last night. But I think you particularly enjoyed your chant being aired from the away end during your post-match TV interview…

I was there with Millie doing the interview and then obviously heard the song. It was special for me and I love every time I hear it. I'm always thankful and grateful for it. The fans have always been special to me and it was amazing to hear that. And to feel as though I've been recognised by the fans is amazing and I hope that the song carries on.

On Wolves, it's the final game of 2019 and you return to Anfield as world champions. That must be quite exciting for you all…

It'll be good to obviously see the badge on the wall. I think we're wearing the badge as well on the kit, so it'll be a good day and good for the fans to see that. We're really proud of what we've done. But we're here to make sure that we're focused on the game and make sure that we don't get caught up in our own hype and keep our momentum going by winning the game. We'll try to replicate the game yesterday if possible and go out in style like that. A clean sheet, a couple of goals and a good performance is what everyone is wishing for. You don't always get what you want but we can work as hard as we can to try to get that. That's what we'll do.

The games are coming in thick and fast. But with the momentum the team currently has, is it more a case of excitement rather than fatigue?

Obviously you want to play as much as possible, especially when you're in good form like this. You feel as though everything is going right and going into every game you feel confident. You feel as though you've got the ability to do anything you want to. For us, it's massive to have that confidence and we're happy to know that we're doing so well. But we can't take it easy, we know that if we're not at 100 per cent then things will start to go wrong. So, every game we need to be bang at it.

It's the final match of the decade, one I'm sure you could have never envisaged panning out the way it has...

Most definitely not! I think at the start of the decade I was probably in Year 6 or 7. To think where I'm at now is something that I'm so proud of. It's been an amazing journey and I'm thankful for everyone that's helped me along the way, always been there for me, pushed me to work so hard and always been in my corner. I can only say thank you to the people that have helped and here's to hopefully another good decade.