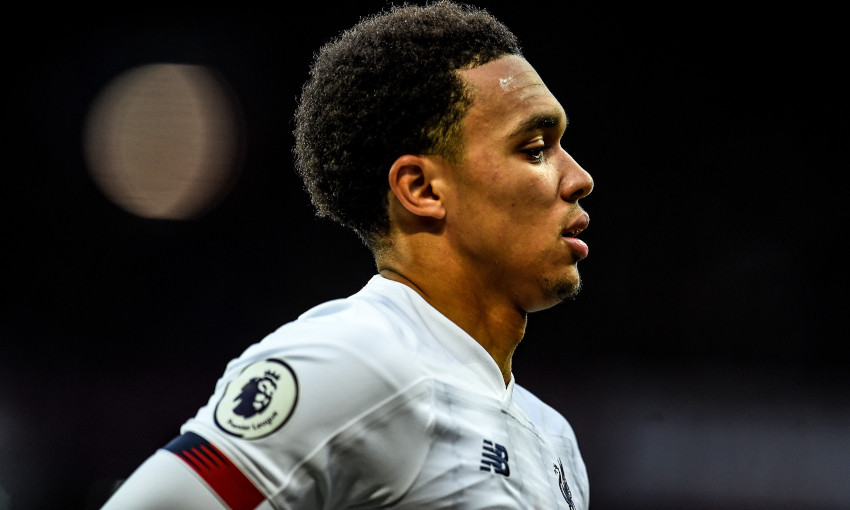 Trent Alexander-Arnold articulated his pride after realising the ‘dream’ of making 100 appearances for Liverpool.

The Scouser reached the milestone on Saturday and marked the occasion with a typically-adept assist for Sadio Mane to glance home a stoppage-time winner that completed a come-from-behind 2-1 victory over Aston Villa.

Only three players have achieved the feat of playing a century of games for the Reds at a younger age, and the 21-year-old was delighted to have hit the landmark while helping his team claim three vital points.

“It was good to get the win today and the 100th game obviously is a proud milestone for me personally,” Alexander-Arnold told Liverpoolfc.com at Villa Park.

“It’s something I’ve always dreamed of. It’s something me and my family are so proud of and I’m happy that we got the three points.”

Liverpool’s powers of recovery were again required to ensure they remained unbeaten and six points clear at the top of the Premier League.

For the third top-flight match in succession, Jürgen Klopp’s side fell behind, with Trezeguet’s back-post finish giving Villa a slender 1-0 lead at half-time.

Despite their almost total dominance after the break, the Reds were still in arrears as late as the 87th minute.

That, though, was when Andy Robertson powered in Mane’s deft cross with his head to equalise, before Alexander-Arnold’s corner was artfully and bravely directed past Tom Heaton by the No.10 deep into injury time.

Victory over Villa means Liverpool have cancelled out deficits to take seven points from their last three league outings, with Alexander-Arnold explaining: “Obviously we want to be winning games differently than we have been recently, but a win’s a win.

“These are the ones that entertain the fans the most and it shows the relentlessness that we have got in the team to keep on going, keep wearing teams down and today we showed that with two goals very late on.

“Obviously we know we can’t play like this every single week so we need to improve in certain areas and make sure these early goals against us need to stop happening.”

The right-back, whose assist for Mane was his 22nd for the club, never felt his side were beaten at Villa Park, either.

“We’ve always got the belief that we can score a goal,” he asserted.

“Especially in the second half, we started to wear them down and started to create a few more chances and probably should have scored a bit earlier on.

“Doubts start creeping in and you get to the 87th minute and you are thinking ‘are we even going to get another chance?’ Then we get a few more and we were able to punish them and come away with the three points.”

“We were happy to get the win today obviously, and it gives us a bit more breathing space. I’m sure it will be an exciting clash come next Sunday and both teams will be looking for the three points - but we will need to make sure we keep our 100 per cent concentration for the whole game.”