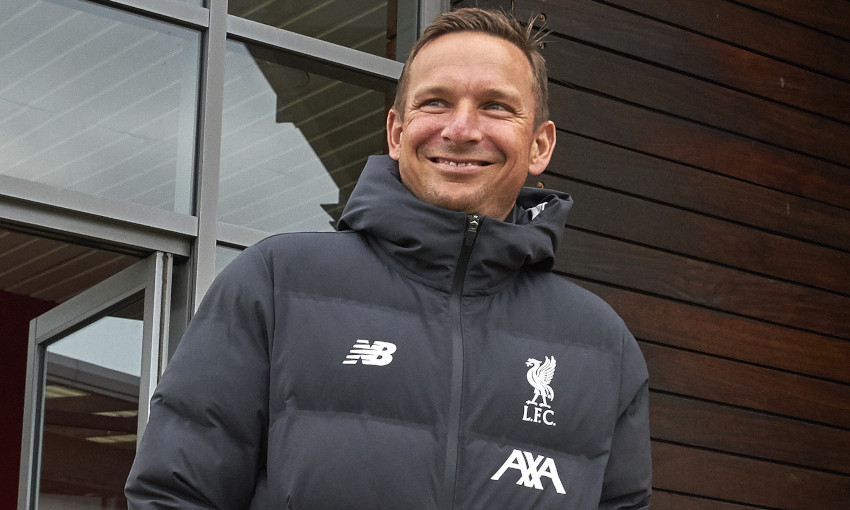 Liverpool are focused on being the best they can be as they aim to reach the Carabao Cup quarter-finals by beating Arsenal, says Pepijn Lijnders.

After a team featuring a blend of youth and experience saw off Milton Keynes Dons 2-0 in the previous round, the Reds host the Gunners at Anfield tonight.

Lijnders indicated ahead of the tie that the depth of the squad would be used again in the competition, though the line-up will be chosen to ‘attack’ the game.

Liverpool’s respect for Arsenal has been central to their pre-match analysis – but the players will be told to concentrate on expressing their own talents, explained the assistant manager.

“We just want to be the best we can be,” Lijnders told Liverpoolfc.com. “We always focus on ourselves. That already creates a certain development.

“You want to analyse the opponent, you need to know everything about them, but let them worry about us. That’s one of the main things if you are putting a team in place.

The cup clash with Arsenal is Liverpool’s fourth of seven matches in the space of three weeks in all competitions.

Asked how the coaching team are managing the demands of the fixture schedule, Lijnders said: “We need freshness to play our game, if we want to play attacking football and want to be competitive, want to see creativity, want to see a high-intensity game, you need freshness.

“I really believe the game is played for the public – for the fans, for the stadium, for the television and for the discussion on the street. The better the football is, the more discussion and the more attractive it is to watch.

“It’s really important that we search for a quality game. If we want a quality game it means players need to recover between the games and we need to use the squad.”

A place in the last eight is on offer to the winners of the all-Premier League clash, which Lijnders revealed is the initial target the Reds set in each knockout tournament they enter.

“I believe in each competition, if you are in the last eight anything can happen,” he said.

“For each competition, the first objective is to get into the last eight; Champions League, get in the last eight, because from there on it’s very interesting.”

Liverpool enter the tie buoyed by a comeback victory over Tottenham Hotspur at Anfield on Sunday which maintained their position at the Premier League summit.

Jürgen Klopp’s side fell behind within 50 seconds of kick-off but dominated much of the remainder and took the points through second-half goals from Jordan Henderson and Mohamed Salah.

It was the discipline that the Reds showed without the ball that most pleased Lijnders – and, he feels, was crucial to overturning the scoreline.

“We know if we play Tottenham we have to be at our best in all departments,” began his assessment of the contest.

“We needed to be at our best because one, they have a lot of individual quality and goals in them; and two, only four months ago we played them in the Champions League final of course.

“Our front three could defend five or even six players, hard work but unbelievably important how to constantly put pressure on their last line and even their midfielders.

“I think the difference between a good team and a top team, or better a good team and a successful team, is the individual quality of your front three – but above that is that these players put the team above themselves. They did that again and again. Our best games show that, whoever is in our front three – Mo, Sadio and Bobby in this case – if they have the mentality to constantly search for pressing triggers and put pressure and close down spaces.

“Our midfield was again a very good game, especially the tactical discipline was excellent, because we know Tottenham always want to play inside then come between the lines. We have to help the front three pressing-wise but at the same time we need to cover the inside. That asks a lot of discipline.

“The last line, it’s not easy to control Kane and Son with a high line and at the same time always be protected and have the focus to circulate the ball quickly and be balanced.

“I speak a lot about defence but, of course, we had the most shots on target in two years. But I really believe that, we had 70 per cent possession, it’s really about the [other] 30 per cent to be able to play for such a long time in the opposition half.

“For me, that was really important to see because we know we can dominate and dictate at Anfield, but constant pressure against a good team, constant concentration to be organised when we have the ball so when we lost it we could be there, we’re really happy, to be honest.”