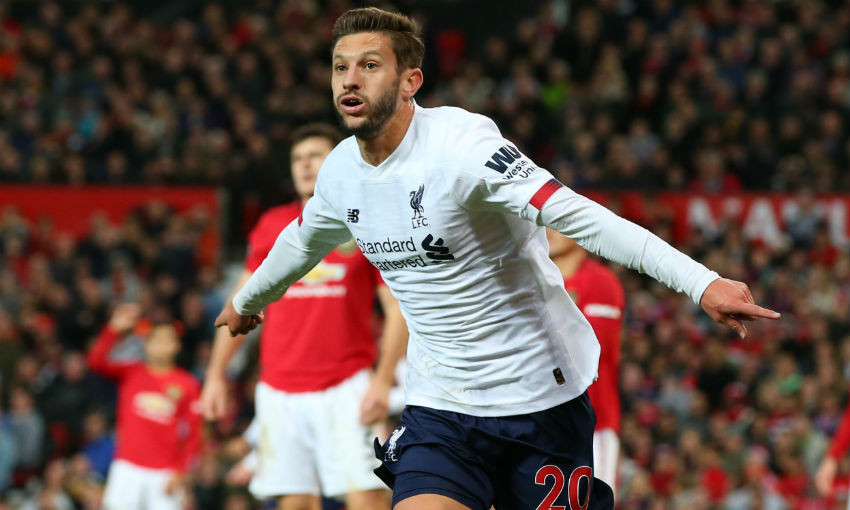 Adam Lallana grabbed a late equaliser as Liverpool's unbeaten start to the Premier League season continued with a 1-1 draw against Manchester United on Sunday.

Marcus Rashford gave the home team the lead on 36 minutes at Old Trafford when he tapped in Daniel James’ low cross at the back post.

Sadio Mane then had an effort ruled out for handball by VAR before the interval as the Reds thought they’d drawn level.

However, in a game of few chances, Liverpool were required to wait until the 85th minute to restore parity when substitute Lallana arrived on time to turn an Andy Robertson cross over the line from close range.

The result ends the Reds’ winning sequence of 17 games, but ensured they remain undefeated in the Premier League since January and have a six-point lead at the division’s summit.

The teamsheet confirmed a return to action for Alisson Becker, making his first appearance since sustaining a calf injury in the opening-day win over Norwich City on August 9.

Joel Matip was also available once again; however, Liverpool were without Mohamed Salah due to the ankle issue picked up against Leicester City prior to the international break. Divock Origi replaced him in Jürgen Klopp’s XI.

Liverpool kicked off at Old Trafford aiming to restore an eight-point advantage at the summit of the Premier League table and maintain their 100 per cent start to the campaign.

However, in order to do so, they’d need to end a winless sequence of five games at the home of their great rivals.

The hosts attempted to assert themselves from the first whistle, though it was Roberto Firmino who had the fixture’s first half-chance, but he skewed well wide after Mane’s header had released him into the left channel of the area.

Georginio Wijnaldum then drilled low into the gloves of David de Gea after expertly working space for a strike on the edge of the box.

Andreas Pereira had an effort deflected behind by a Matip block on the 20-minute mark as United looked to hit their opponents with a counter. Scott McTominay then attempted to test Alisson from range, but failed to trouble the goalkeeper with a skimming shot across the turf.

On 33 minutes, Liverpool fashioned a surge down the right through Mane. His low ball found Firmino, whose first-time swipe was pushed away by De Gea.

Soon after, the Reds found themselves behind. James raced down the right before crossing low for Rashford to touch in at the back post.

The visitors were aggrieved having felt Origi had been fouled by Victor Lindelof in the build-up, but after a VAR check the goal was allowed to stand and United were 1-0 ahead.

The technology then ruled out a leveller from Mane a minute before the break when he was deemed to have handballed before slotting beyond De Gea after he’d escaped in behind, ensuring the home team returned to the dressing rooms with the advantage.

Liverpool set about looking to restore parity after the break, but a stop-start feel to the contest prevented them building any momentum.

Alex Oxlade-Chamberlain replaced Origi just before the hour and after he’d struck wide at one end, Rashford dragged just off target at the other as United showed their threat on the break.

Lallana and Naby Keita also entered the action – and it was the former who drew them level with five minutes remaining when he tapped in Robertson’s low delivery at the back post.

And with United hemmed in, Oxlade-Chamberlain drilled inches off target in stoppage-time, but Liverpool could not fashion a dramatic second.