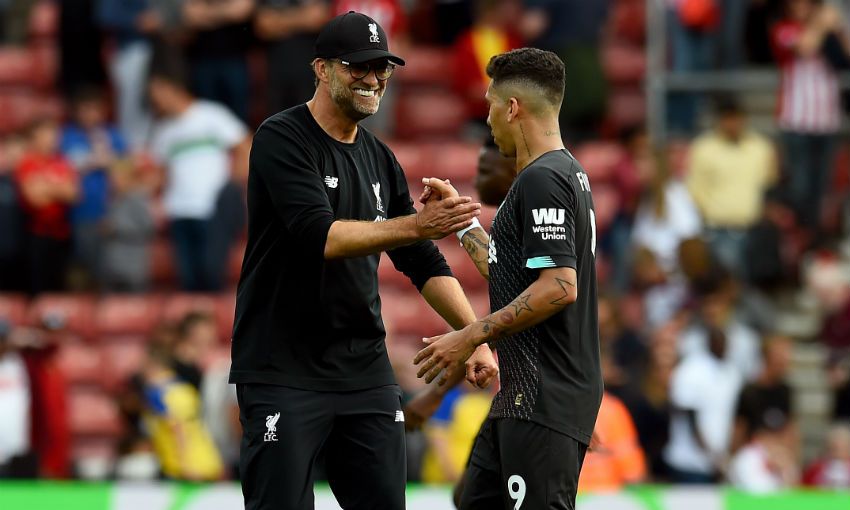 Jürgen Klopp saluted the world-class talents of his front three that he believed made all the difference during Saturday's 2-1 victory at Southampton.

Sadio Mane unlocked a tense affair at St Mary's with a superb curling effort in first-half stoppage-time before Roberto Firmino doubled the Reds' lead midway through the second period.

After a midweek trip to Istanbul for the UEFA Super Cup encounter with Chelsea that involved extra-time and penalties, the Liverpool manager was thankful to have a trio of match-winners in his starting XI on the south coast.

"A lot of times in my life I had sensational players always [but] not world-class players," Klopp told Liverpoolfc.com. "Now, thank God I have them and they make the difference. We don't have to talk about that.

"They were a constant threat, however tired they are. That's brilliant and, of course, made the difference. We don't have to talk about that."

Mane's curler came right at the end of a strong showing in the opening 45 minutes from Ralph Hasenhuttl's Saints side, who responded well to their opening-day defeat at Burnley.

But a small tactical tweak at the break then helped Liverpool take more control of the encounter as they made it two wins from two in the Premier League.

"I think Southampton tried to kill our game with their formation and they played different against Burnley obviously," Klopp explained.

"They had a real proper fight at the back, so that gave us space on the wings. We used that but not often enough, otherwise they would have had to run much more. We could adjust that a little bit at half-time.

"I'm really happy. It's so important. The start of the season is so important. Having an away game at Southampton is always difficult, but in the week we had, it was special."