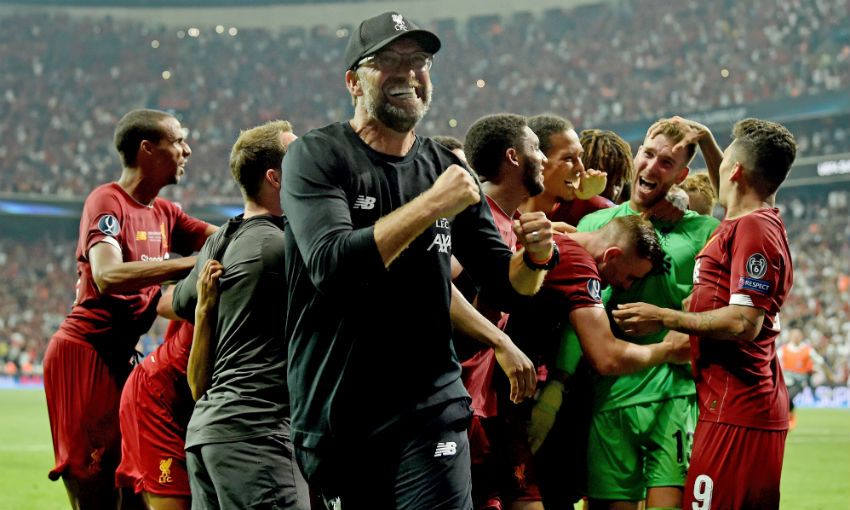 Jürgen Klopp took 'great' satisfaction in watching his Liverpool side secure another piece of silverware by beating Chelsea on penalties to win the UEFA Super Cup on Wednesday night.

Adrian saved decisively from Tammy Abraham after the Reds had successfully converted all five of their spot-kicks following a 2-2 draw after 120 minutes.

Sadio Mane scored twice for Klopp's team, the forward first equalising Olivier Giroud's first-half opener in the early stages of the second period before then firing his side into the lead in extra-time.

Read on for a summary of Klopp's post-match press conference from Besiktas Park...

On his players being able to touch the ‘This is Anfield’ sign after winning two European trophies...

Actually we don't have time for that! We play on Saturday again, we have to find a way to be ready for that game. After 90 minutes, I think, when it was close to the final whistle, Frank Lampard asked me: ‘Where do you play and when do you play [at the weekend]?’ And I said ‘Southampton on Saturday – congratulations!’ Nobody wanted extra-time tonight, they play Leicester at home on Sunday but they played last Sunday so there was no advantage tonight but for the next game for both it will be pretty tough. But we have to be ready again and that's my present to the players to help them recover so that they are ready for the game. It was a big fight tonight and I didn’t know before the game how good it would be when you win it, but it’s brilliant, it’s really big. The atmosphere in the stadium was outstanding, it showed us again how big this club is: wherever we go, our supporters are already there. I don't know exactly how many fans were from Istanbul but I can only say ‘thank you’ because it was just a brilliant atmosphere. We would have loved to bring our weather to Turkey for one day at least because it was really intense, but now it’s done, we came through and we won it. The boys feel really good, I feel really good, so everything is OK.

I didn’t know that and I never thought about things like that in my whole life. It’s nice, there must be a first one so I’m sure I’m not the last one. There is a lot of good coaches in Germany but it’s nice to be there, but I don’t see myself as German really. I am German and I like that but I see myself more as European and I felt like that again tonight. That when we all have the same targets we are so close to each other, in parts of life it looks sometimes that we have different ideas, different targets, but as people we are all the same. We want all the same and when we have something so wonderful like loving Liverpool FC, then it shows that we could really be much closer together than we are in reality. So it's not about me winning it, it’s about LFC winning it, winning it for all the people who support us and I can feel how much it meant to all these people and that makes me really happy.

On what he said to Alex Oxlade-Chamberlain when substituting him at half-time and how vital his replacement, Roberto Firmino, is to Liverpool tactically…

I didn't say a lot to Ox, I don’t think it was necessary. For Ox it was very important to have these minutes, it’s a position he can play. He can play much better than he did tonight but that’s how it is and after a long injury you have to find back the rhythm. In training it’s already there and now in the game he had good moments but of course not enough for his quality. It was not about that, I knew it was a very, very intense game so it was clear that we have to make that decision because we didn’t want to push him through, we want to give him the opportunity to perform, to shine if you want. In that position and the circumstances it was obviously not as possible as we would have wished, but that’s then my mistake and not his mistake because I made the decision.

Bobby Firmino is pretty vital, but Sadio Mane can play that position as well. Divock Origi played in that position really well. They are all different, they all have different strengths, but I think for tonight when the opponent kind of learns from the game and gets used to what you do, then it’s important that you can make a change and it was a big change because Bobby is different to all other players in the world, probably, in that position and it helped us a lot. For him, it was really, really intense. It was not the plan that he plays tonight around 80 minutes, now he had to play it. You saw it was hard for him, he had pretty much no pre-season and played after one week. That was the problem for us a little bit, it’s our third competitive game where we had to throw in everything to be on top of it after the pre-season we had. We know that we have to improve a lot of things, but a lot of things were good… we can play and we will play better football but for tonight it was only about winning and we did that. We found again a way to win the game – and that's big, really big, it feels incredibly big and I'm really happy about that.

THE REDS ❤️ Inside our dressing room after tonight's #SuperCup win 👌🏆 https://t.co/bIxLansf92

On the display and story of Adrian...

I don't know where Adrian was two weeks ago when we played Man City! When I spoke to him for the first time, he told me he had a goalie coach and stuff like this. It was clear he would need time to get fit. But we didn't have that time, so he has to be fit now and he was fit. He played an incredible game, he had sensational saves. Both goalies had that, but maybe from Adrian it's a bit more surprising because without pretty much any preparation. I don't know when he played the last game for West Ham, to be honest, so it's a while ago. Being ready like he was ready tonight is incredible.

He's not only on the pitch a great person, he showed me already that he's a proper personality in the dressing room as well. He was maybe louder than I was at half-time. I was not loud because I wanted to give some informations, but he was really on his toes and that was good. It's important and it helps us. He deserves that. Of course in penalty shootouts it's always lucky, but the performance over the 120 minutes was incredible. Making the save for the penalty is the icing on the cake and is wonderful. I saw now one time that he could really grab his towel before he started celebrating. That's special as well, so he's obviously quick in mind and knows what he wants to do. He helped us a lot and he can be really proud of what he did tonight.

On what it means to lift the Super Cup...

I asked after the game again Millie and Hendo how do people see it. I'm not long enough in the country and was never in that game before. They said, 'Oh no, it's a proper trophy'. It's on a wall at Melwood, so good. They have to draw it again, to paint the wall at Melwood again, bring another number on the wall '2019' and a picture of whatever. It's big. How I said, I didn't know before the game how big it will feel. Now I know it and it's great. If I would again be in that game - which would be nice because it would mean you have won something before - I would now be more experienced. How I said, it's nice, really nice. But it's not about me - I don't only say that, I mean that - it's really about doing it for the people. From four opportunities in the last three months, we won two. That's good, that's absolutely OK.

Now let's carry on. Let's try to find a way to win on Saturday and let's try to find a way in the game after. Southampton, Arsenal is coming up and both will be incredibly difficult for different reasons. I think the only team that celebrated more tonight than us is probably Southampton when they saw '90 minutes, no decision, let them go again'. But we will have to find a way and we will find a way to be really uncomfortable at least. If we are uncomfortable for the opponent then we can find a way to win the game. I have a couple of hours to think about that and that's what I will do after talking to all of you.

On the performance of the match officials and the use of VAR...

I told the ref team after the game that if we would have played like they whistled, we would have won 6-0. That was my absolute opinion. They played a brilliant game. I told her as well that I am not happy with the penalty decision because I'm still not sure that it was a penalty, but it's not important anymore. They were really good. Whatever you could have thought before the game, there was pressure on them like hell with an historic moment. Staying by yourself, staying calm and do what you have to do, decide very important things in a very difficult and intense game, I couldn't have more respect, to be honest. It was really a brilliant performance.

I spoke to the fourth official about the late offside decisions. It's really difficult. I think really it's worth it to talk about again because it's like they have to wait and that's like how the protocol wants us to do it. But it's just difficult to judge a situation in a game. How can we see the player there, over there? It's not possible. You would think it's not offside. I think there were a few situations when it was offside and they didn't whistle it and then it was a corner. I'm not sure that's already the finished article - hopefully not. If we can't change that then we just have to get used to it. It feels strange in a lot of moments. If you think now about the game, you think they had chances here, but a lot of chances were from offside positions. We not only have to delete that from the official stats, we have to delete them as well from the personal stats - a shot here, a shot there - because you forget that it was a clear offside. It would be nice if they could talk about it again and have a proper look on it. And maybe they can go back to the good old offside decision - just that it's offside, flag up, go and let's play in the other direction.