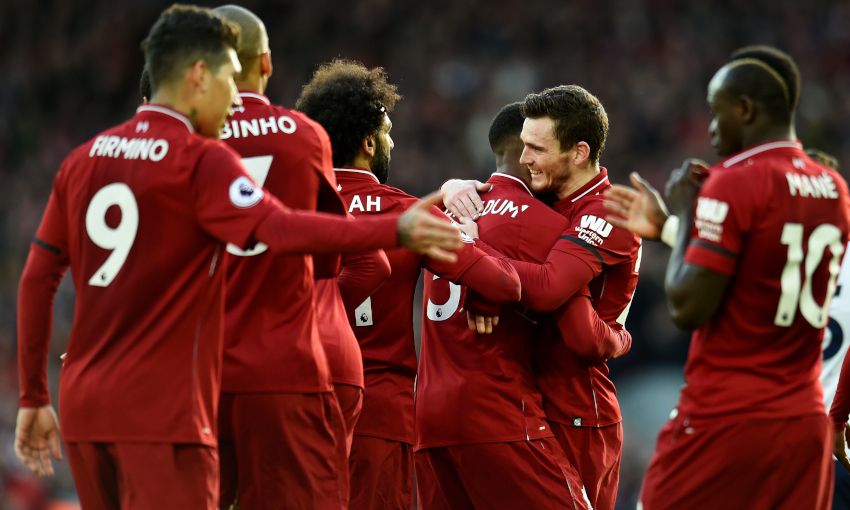 Liverpool reclaimed top spot in the Premier League table with a comprehensive 3-0 victory over AFC Bournemouth at Anfield on Saturday afternoon.

Sadio Mane scored for a fourth consecutive game to put the Reds in front midway through the first half when he glanced in a header from 10 yards before Georginio Wijnaldum netted with a deft lobbed finish soon after.

The result takes the Reds three points clear at the division’s summit, having now contested the same number of fixtures as second-placed Manchester City.

The teamsheet confirmed just one change for Liverpool as Wijnaldum returned from injury to replace Adam Lallana in the starting XI. The fit-again Trent Alexander-Arnold and Jordan Henderson were on the bench, but Xherdan Shaqiri missed out due to a slight abdominal strain.

With the decibel levels inside Anfield cranked up long before the first whistle, Liverpool got the game under way looking to return to winning ways after consecutive 1-1 draws with Leicester City and West Ham United.

However, it was almost Bournemouth who struck the game’s first decisive moment when Ryan Fraser found space on the left corner of the home area and saw a low curler parried away by Alisson Becker, with 80 seconds gone.

Still, it was the Reds who had started stronger overall – and Salah arched an effort over after cutting in from the left. Then, Mane’s reverse pass created a chance for Firmino, who had a close-range nudge towards goal blocked by Artur Boruc.

Finally the pressure yielded a reward as the hosts opened the scoring in the 24th minute.

A corner cleared by Bournemouth was worked back to its taker by Naby Keita – and James Milner’s delivery from the right found the forehead of Mane, who nodded beyond Boruc to extend his personal scoring sequence to four consecutive games. 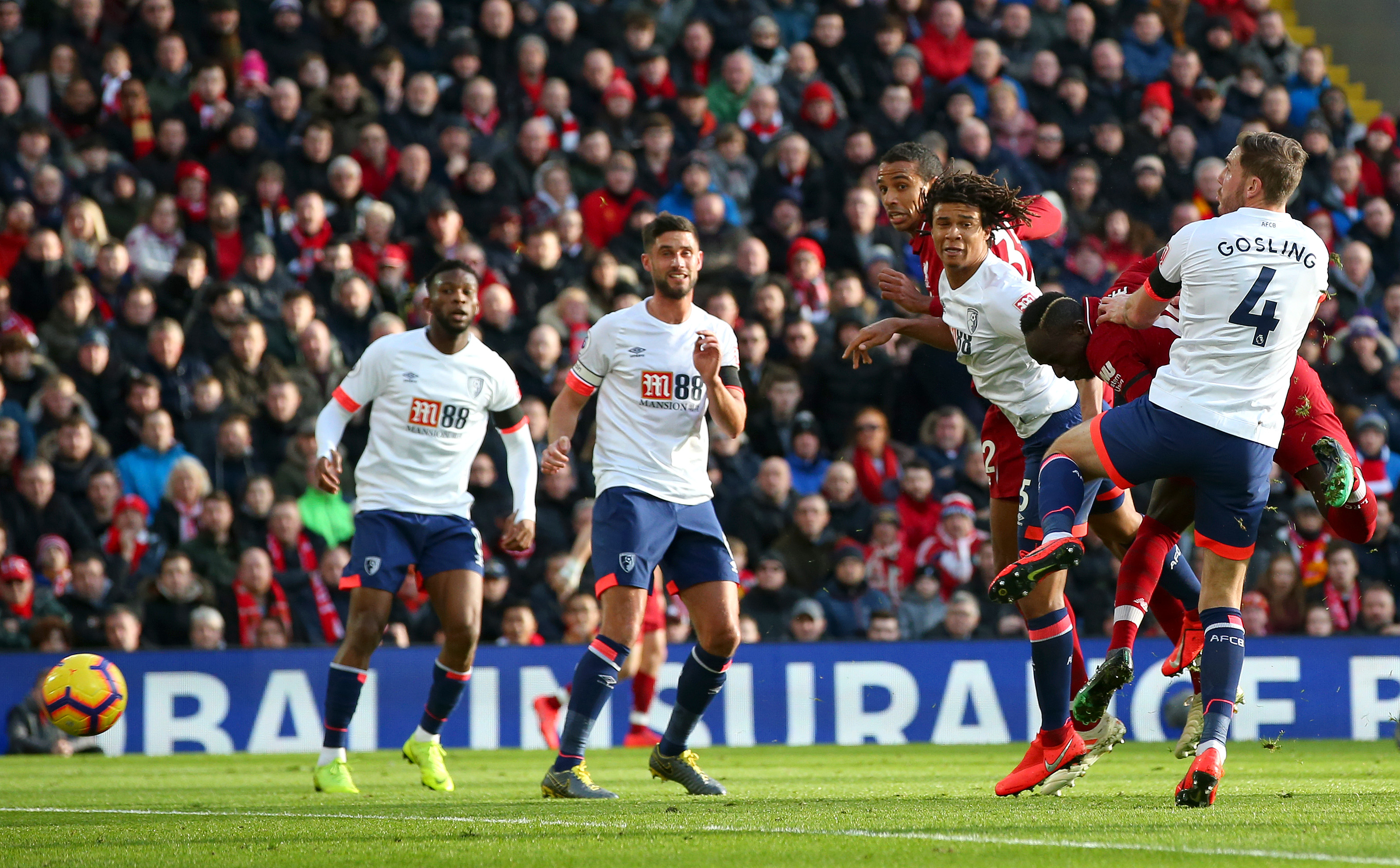 Salah miscued when presented with the chance of a second soon after, unable to properly connect when Wijnaldum squared at the conclusion of a counter-attack.

Nevertheless, the advantage was extended when Wijnaldum found the back of the net with a superb finish.

Taking down Robertson’s forward ball into the path of his run into the left of the box, the midfielder allowed it to bounce once before lofting over Boruc with nonchalance.

Liverpool’s advantage could have been even greater, but the visiting goalkeeper pulled off a smart save to deny Salah a goal-of-the-season contender after he’d juggled a bouncing ball on the edge of the box before letting a volley fly.

The Reds snuffed out any renewed optimism from Bournemouth almost immediately after play resumed as they made it 3-0 with a sublime effort.

Keita hoisted a pass forward into Firmino’s run into the area. The No.9 laid it off to Salah’s dart inside from the right with a backheel and the Premier League’s top scorer did the rest by sliding it under Boruc. 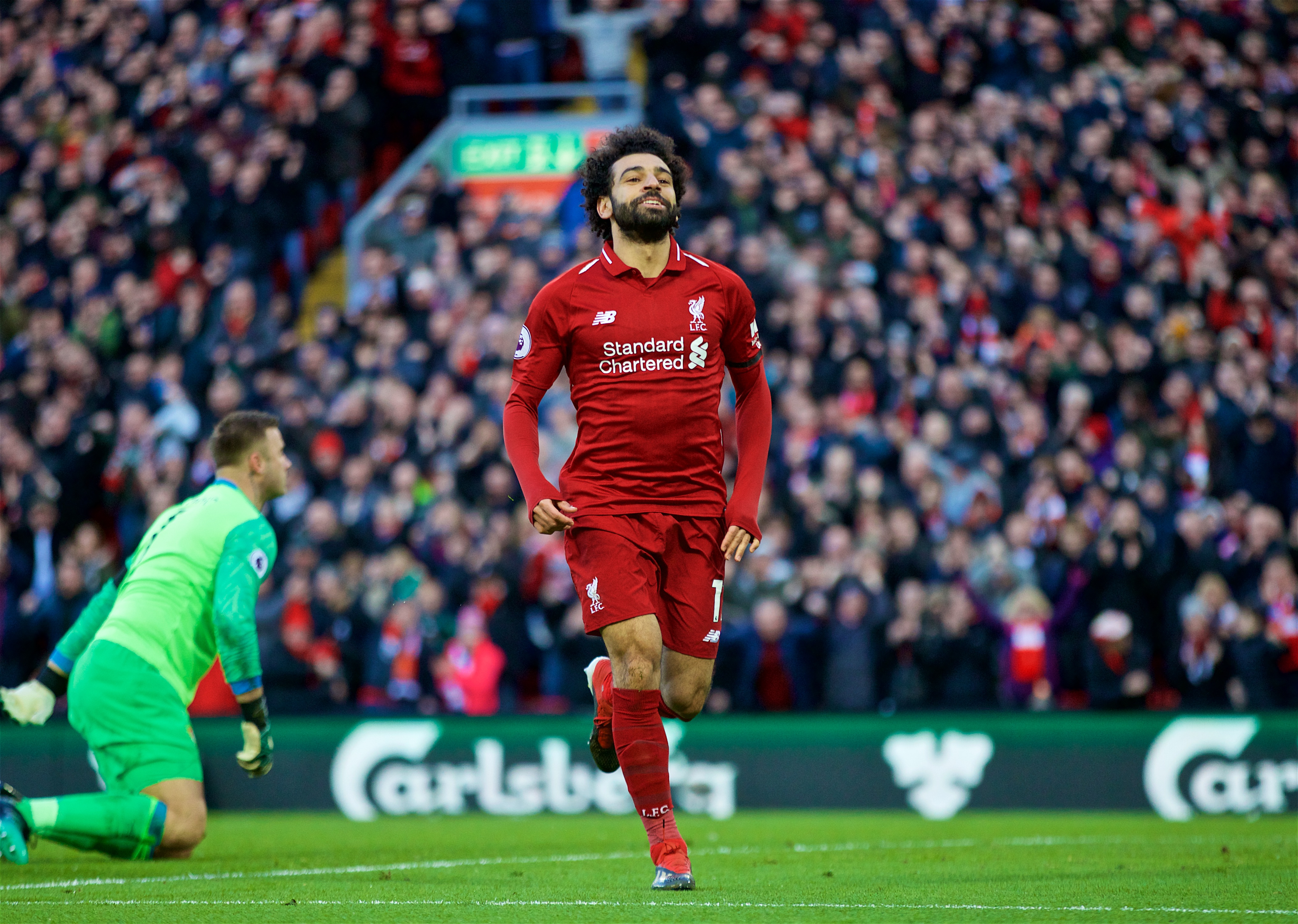 Mane then nodded a Wijnaldum centre agonisingly wide of the far post as the home team threatened a fourth.

Shortly before the hour, Bournemouth opted to replace former Red Jordon Ibe with another face familiar to those inside Anfield as Dominic Solanke entered play, with both players receiving a warm reception.

Salah struck the crossbar after more outstanding link-up play with Firmino with 15 minutes to go and Alexander-Arnold returned to action in place of Wijnaldum.

Keita, Firmino and Alexander-Arnold all had good chances to add extra gloss to the final scoreline, but Liverpool had long since done enough to return to first position in the Premier League table.