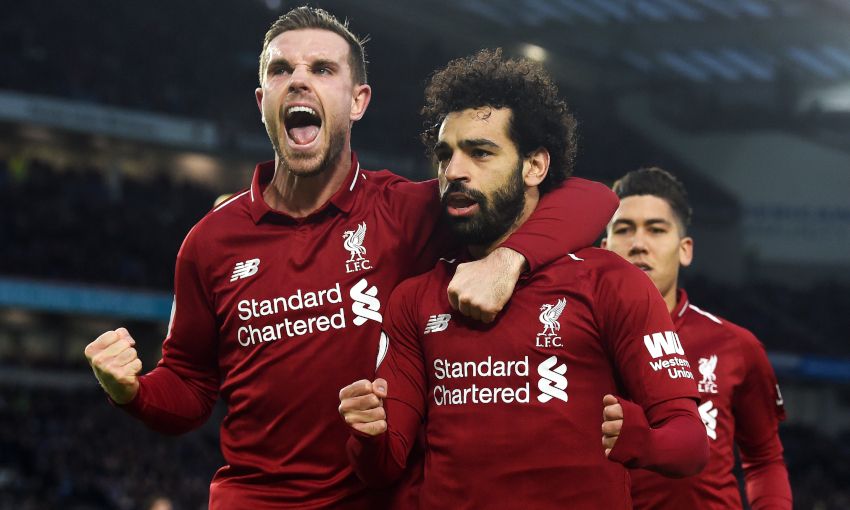 Liverpool returned to winning ways and extended their lead in the Premier League with a 1-0 victory at Brighton and Hove Albion secured by Mohamed Salah's penalty.

The No.11 broke the deadlock five minutes into the second half at the Amex Stadium, converting the spot-kick after being fouled in front of the Reds’ travelling supporters.

And the strike was enough for Jürgen Klopp’s men to collect all three points and register their first success of 2019, before nearest rivals Manchester City and Tottenham Hotspur play in the coming days.

Klopp made wholesale changes on the south coast, with only Fabinho – again at centre-back – and Xherdan Shaqiri retained from the starting XI at Wolverhampton Wanderers on Monday night.

Liverpool commanded more than 85 per cent of the possession in the opening 10 minutes and fashioned the first sight of goal with a crisp move.

Brighton inched into the game and, on the quarter-hour, Glenn Murray peeled into space inside the Reds box to meet a Pascal Groß delivery but flicked his header over.

Fabinho misdirected a lunging header from a right-flank corner as the nearby Van Dijk complained of apparent holding by Seagulls captain Lewis Dunk. 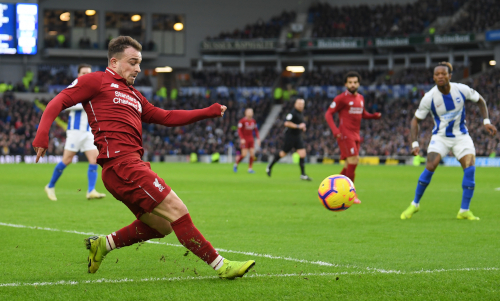 In truth, the match needed a spark – and it almost came from Shaqiri.

Trent Alexander-Arnold, having been encouraged repeatedly to sneak forward with greater regularity, stepped inside at the corner of the Brighton area and lifted in a precise cross off his weaker foot.

Shaqiri’s positioning and idea were correct – the unmarked No.23 aimed to glance the ball inside the left post – but his execution was a yard or two out of line.

And that, pretty much, summed up a tepid first half at the Amex Stadium.

There was a different energy to Liverpool immediately after the restart and Salah forced David Button into a low save when he scampered through the left channel and drilled an effort towards the far corner.

He did not have to wait much longer to celebrate, though.

The Egyptian’s nimble footwork carried him away from his markers and dangerously into the Brighton box, where Groß upended his man, prompting an instant point to the spot by the referee.

Salah stepped up to take the penalty and dispatched an angled, rising strike into the right side of the net, above the reach of Button’s dive, for his 14th Premier League goal of the season. 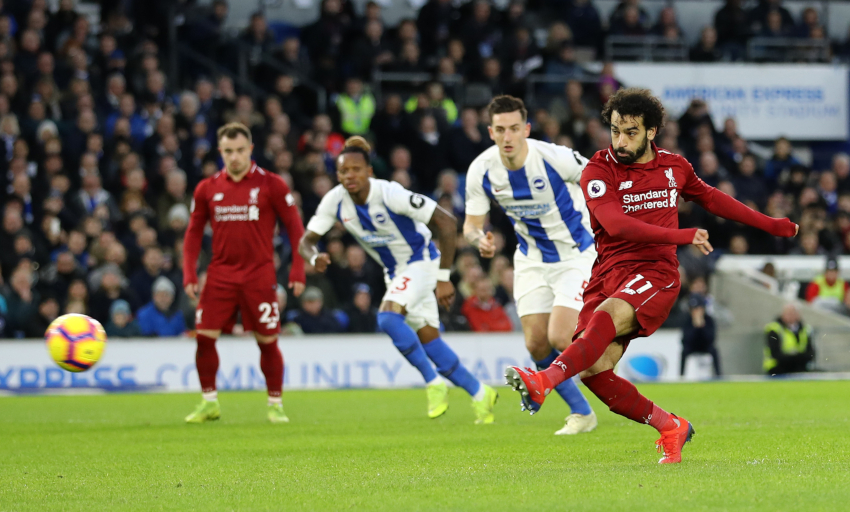 Still, the Reds were thankful to Fabinho for preserving their new-found advantage when he blocked Groß at close range in the box, the Brighton attacker having been picked out neatly from the right hand side.

Alisson Becker had to push a blast from Jürgen Locadia around his left post and, at the other end, Button spilled a Firmino punt as the game stretched in the closing stages.

Georginio Wijnaldum flashed a shot wide of the post after fluid approach work by Salah and Firmino, and Mane saw a hit on the counter-attack deflected out, but Liverpool had done enough and moved clear at the Premier League summit with a timely win.