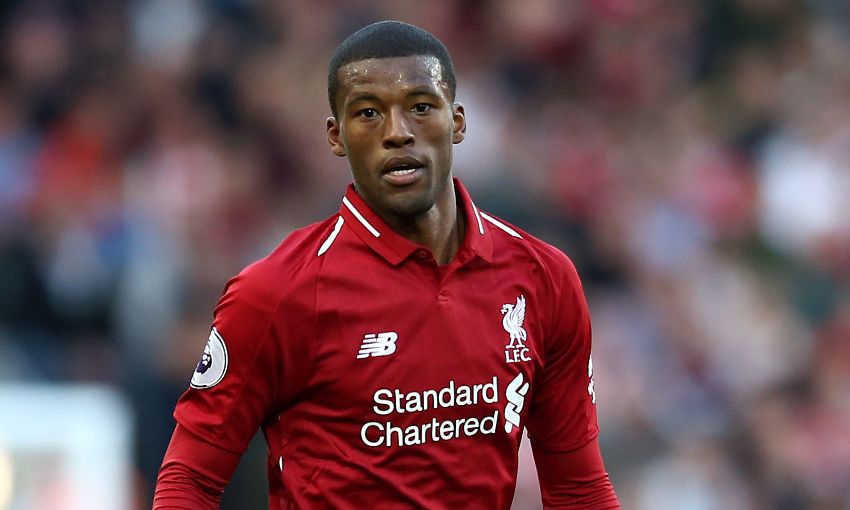 Georginio Wijnaldum has no interest in the bigger picture of potentially moving four points clear at the top of the Premier League tonight.

Instead, the Liverpool midfielder’s sole focus is on passing the ‘really, really tough’ test Wolverhampton Wanderers will provide at Molineux.

The Reds travel to the Midlands knowing that a win would extend their slender advantage over Manchester City - temporarily at least, with Pep Guardiola’s side not in action until they take on Crystal Palace on Saturday.

Wijnaldum, though, believes it would be a mistake to concentrate on anything other than the immediate task of overcoming seventh-placed Wolves.

“No, not really,” the Dutchman told Liverpoolfc.com, when asked whether the situation at the summit of the standings will be on his mind pre-match.

“This season we didn’t think about getting close to City when we were in the future situations [playing after them], or in this case to go four points ahead.

“We don’t really think about that, we just want to play the game and try to win the game and then we will see what will happen at the end of the week. We just have to make sure we win our game, that’s the only thing we have to do.

“I think Wolves have shown already against the ‘big’ teams that they are a good playing side, especially at home, so it’s going to be a really, really tough game. We know we have to be 100 per cent concentrated to win that game.”

Wolves have hosted the three other teams currently occupying the top four spots in the Premier League already this season.

Having held City to a 1-1 draw in August, Nuno Espirito Santo’s side lost narrowly to Tottenham Hotspur last month and beat Chelsea 2-1 earlier in December - a record Wijnaldum puts down to their positive approach.

“They are not a team who just play [to avoid] relegation, or play long balls and try to fight for the second ball. They are a team who are trying to play football, that’s what they showed until now,” he said.

“When they have to play long balls they will do it, but when you give them time to play football, they play football and I think they have the players for that. I think that’s why they do it so well this season because they played with the quality they have.”

Liverpool, of course, are yet to lose a league match this term and have amassed 45 points from their 17 games to date.

Impressive performances and victories over AFC Bournemouth, Napoli and Manchester United in the space of eight days have further swelled the feeling of confidence around the club, but Wijnaldum insists Jürgen Klopp’s team can improve further.

The No.5 continued: “I think this season we played a lot of good games but also games that were not good that we still won.

“So in those terms we are quite consistent, but we’re still a team who is learning. Every day in training and in every game we try to learn more, so I don’t want to say we’re coming to our best form but we’re getting better every time.

“No-one will know what the best form is, so that we’re getting better is something that’s sure because every game you learn a lot of new things.”

Divock Origi: It was a huge win for us - we all enjoyed it