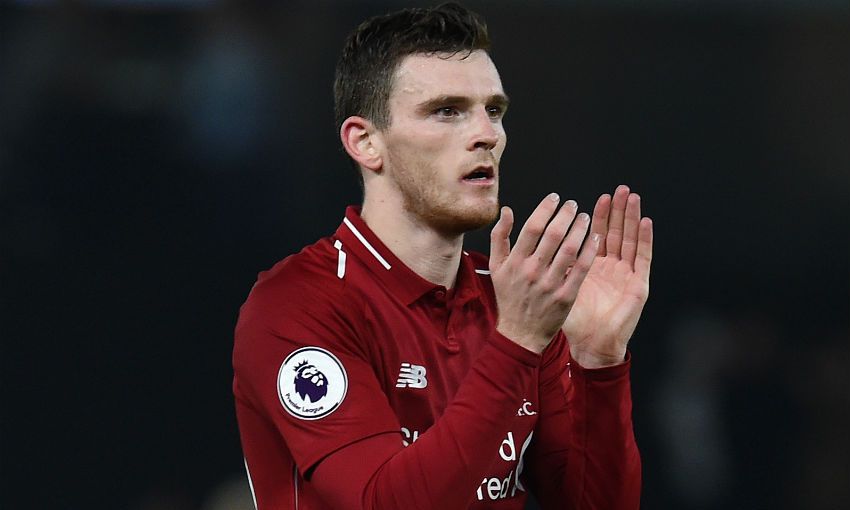 Andy Robertson believes displaying composure amid the frenetic early stages of the Merseyside derby could prove pivotal to Liverpool’s ambitions of beating Everton.

Meetings between the Reds and Blues are customarily played at an intense tempo, and Robertson expects nothing different from Sunday’s contest at Anfield.

However, the left-back thinks it important for Liverpool to settle into their typical rhythm before their opponents in what is sure to be a loud and lively atmosphere in L4.

“I think it’ll be all down to who gets their composure first and we’ll be looking to do that. We’ll be looking for a fast start and to get the fans right behind us from the first whistle.

Jürgen Klopp’s team head into the weekend looking to extend their impressive unbeaten start to the Premier League season to 14 games.

Everton, meanwhile, sit sixth in the table, having lost just one of their last seven top-flight matches.

The ingredients are there, then, for an exciting derby, Robertson feels.

“The form kind of goes out of the window but it’s the confidence we can take, and they can take as well, from the last six or seven games,” the Scotland captain said.

“I think they’ve had some great results and they’re up to sixth now so it’s both teams going into it in confident mood and that can help. We’re playing with confidence, especially in the league, just now and the results have shown that.

“It’s all about taking the previous results and performances into Sunday and if we can do that, I’m sure we’ll get the right result that we desperately need.”

Robertson played for current Everton boss Marco Silva during their time together at Hull City, and the No.26 has seen signs that the Portuguese’s methods are beginning to bear fruit at Goodison Park.

He continued: “I’ve worked with the manager closely for five or six months and it’s very different to the style of play they maybe played last season and previous Everton teams have played.

“I think he’s really started, especially in the last six or seven weeks, to implement that on the pitch and you’ve started to see the way he’s wanting them to play.

“It looks like they’ve all bought into it, but we know they’re maybe a different team to the ones we faced last season and it’ll be a tougher game. But their form and our form goes out the window. It’s a one-off game, a derby game, and it’s all about who controls their emotions and takes their chances at the right time.”

Milner: Form counts for nothing in these games>>