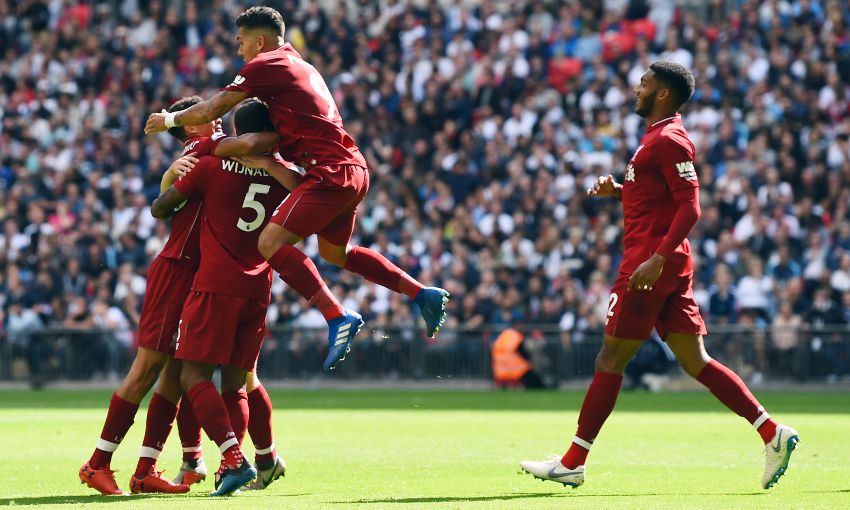 Liverpool extended their winning run to five games with an impressive 2-1 victory over Tottenham Hotspur at Wembley.

The Reds maintained their spot at the summit of the Premier League in composed fashion immediately after the international break, courtesy of goals in either half from Georginio Wijnaldum and Roberto Firmino.

Spurs briefly threatened a late comeback at the national stadium when substitute Erik Lamela netted in stoppage-time, but Jürgen Klopp’s men held firm and continue to set the pace.

The manager once again kept a settled side, making just one change – Naby Keita came back into the starting XI in place of Jordan Henderson.

Summer signing Fabinho was included among the substitutes.

Liverpool dominated the opening five minutes of the contest and actually had the ball in the net within 50 seconds of kick-off.

Trent Alexander-Arnold’s lofted pass allowed James Milner to turn on the right flank and sweep in a cross that Firmino touched into the far corner – only for the linesman to flag for offside with Sadio Mane also in close proximity. 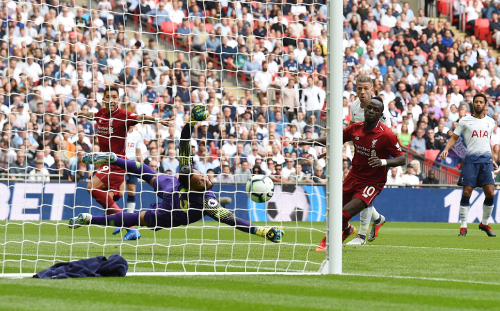 Firmino was then blocked out from a similar run into the Spurs area and Alexander-Arnold curled a free-kick from 20 yards too close to Michel Vorm as the visitors pressed the home side back.

Tottenham began to settle as the game developed but nevertheless gifted the Reds the biggest chance to that point midway through the half.

Eric Dier’s pass backwards was waywardly directed into the gap between his centre-halves and Mohamed Salah seized upon it, speeding into the left side of the area but seeing his high drive beaten out by Vorm.

A good spell followed for Spurs. Alexander-Arnold thwarted Harry Kane inside the box with a well-timed hooked tackle before Alisson Becker collected Christian Eriksen’s free-kick after the Dane tumbled under a Mane challenge.

But it was Liverpool who struck six minutes before the interval.

Tottenham failed to sufficiently clear Milner’s corner from the left side and Wijnaldum brilliantly powered a header back underneath the crossbar. Vorm got hands on the effort but only after it had gone over the line, as confirmed by the Goal Decision System. 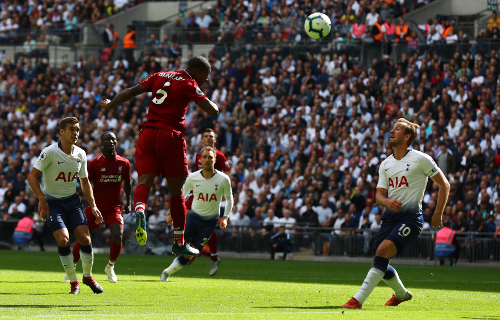 The Dutchman might have helped to double the Reds’ lead moments later but, when fed through by Salah in the right channel, scuffed a shot well wide when Firmino and Mane were ideally placed to his left.

The tempo of the first half increased in the second and the final outcome perhaps hinged on five action-packed minutes that ended with Liverpool two to the good.

Mane might have been the man to inflict further damage on Spurs when Salah scooped up another loose pass by the hosts and squared to his teammate inside the area – but the Senegalese’s crack on the turn was denied by Vorm.

There was a let-off for Klopp’s men within seconds. Lucas Moura got free from Joe Gomez near the touchline, wriggled inside Alexander-Arnold and swiped a low shot off the outside of the near post.

Instead, the crucial period of the game was punctuated by Firmino.

Andy Robertson’s clip over the top released Mane to dart into Tottenham territory from the left and send in a low cross; Jan Vertonghen diverted it against his own post and Liverpool’s No.9 had a simple task to tap in.

Keita, Salah and Mane all sent subsequent attempts on target from promising positions but two was ultimately enough for the Reds, despite the strike from Lamela three minutes into added time, and their 100 per cent start to the season rolls on to the beginning of the Champions League group stage on Tuesday.

Wijnaldum’s goal was his first away from home in the Premier League for either former club Newcastle United or Liverpool, his ninth for the Reds in total.