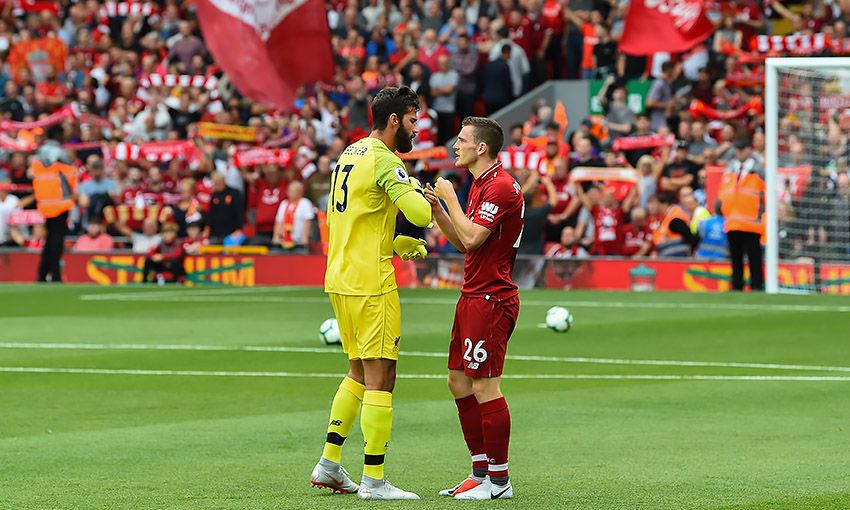 Jürgen Klopp's miserly defence secured a third clean sheet of the season as Liverpool beat Brighton and Hove Albion 1-0 at Anfield on Saturday to go top of the Premier League.

The Reds are one of four teams - along with Tottenham Hotspur, Chelsea and Watford - to have won each of their first three games of the 2018-19 campaign, but are the only side in the English top flight yet to concede a goal.

The trio of shutouts have been secured using an unchanged starting XI, but with a defensive unit that are playing together this season for the very first time.

Below, we take a closer look at the Liverpool back five that has had such an influence so far this term... 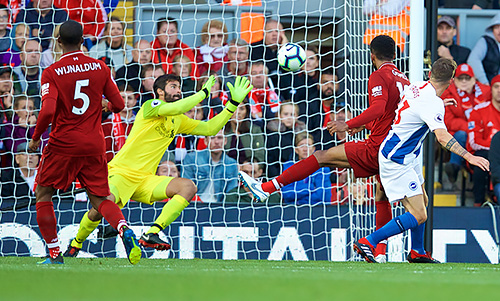 Brazil international Alisson appears to have made a seamless transition following his summer move from AS Roma.

Yet to concede, he is only the third Liverpool goalkeeper in history to keep a clean sheet in each of his first three Premier League games.

Only Pepe Reina has recorded more, with four.

Alisson's reaction stop to palm away Pascal Gross' header in the closing stages of Saturday's win against the Seagulls is perhaps the pick of his six saves for the club thus far, but other aspects of the 25-year-old's game have got Reds excited, too.

Against Palace, the ball-playing 'keeper showed the quality of his distribution as he completed 21 of his 23 passes, while his nonchalant defensive chip over onrushing Brighton forward Anthony Knockaert made the Kop roar.

"Alisson is obviously a goalkeeper who can play football," Klopp said after the match.

"I like the save from the header more than the chip, but the chip was the right thing to do in that situation. He didn't do it for showing off, he did it to sort the situation." 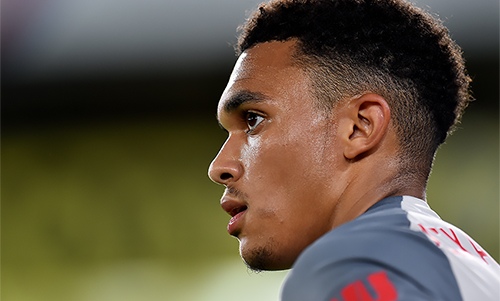 After a breakthrough 2017-18 season, England international Alexander-Arnold returned from this summer's World Cup eager to get straight back into the Liverpool side for fear one of his teammates might impress in his absence.

The 19-year-old duly started the opening-day win over West Ham, led the team in tackles (four) and crosses (six) and has played every game since.

The former midfielder is a set-piece specialist, offers an almost constant attacking outlet and displayed his excellent passing range with a sumptuous 40-yard, outside-of-the-boot, pinpoint volley to Salah on Saturday.

However, it's his often-unheralded defensive diligence that has proved equally important for Liverpool's trio of clean sheets.

The Scouser has amassed a combined 12 tackles and interceptions so far this season, which is more than any other Reds player.

"The tighter games make you work harder and it makes it that little bit sweeter when you come out with the win," Alexander-Arnold said after racking up four of those tackles and interceptions against Brighton.

"You want to keep as many clean sheets as you can and that's how you win games, keeping clean sheets." 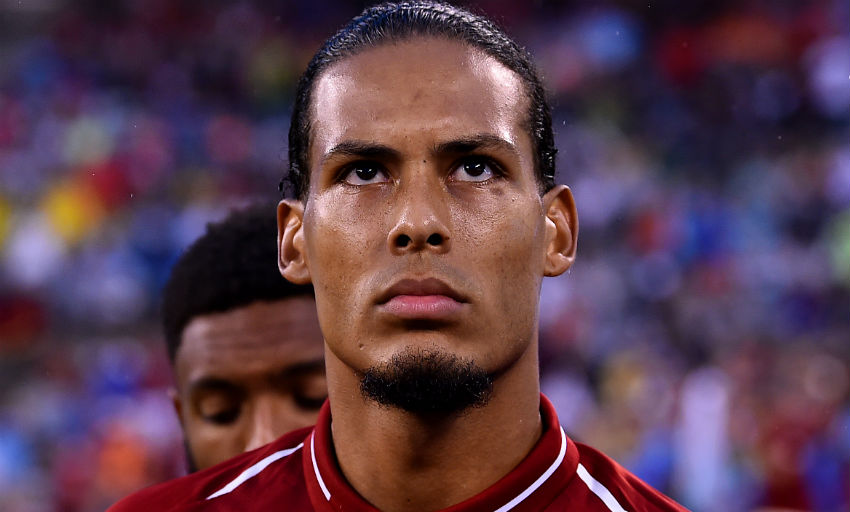 Since making his Premier League debut for Liverpool in January 2018, no other player in the division has kept more clean sheets.

Van Dijk has accrued 10 in 17 games for the club and has an incredible tackle success rate of 95 per cent during that time.

Saturday's shutout means Liverpool have kept seven consecutive clean sheets at home in the Premier League for the first time since February 2007 and Van Dijk has played every single minute of those matches.

Watch: The best of Van Dijk's display against Palace

His colossal display against 6ft3in Palace striker Christian Benteke last week was crucial to Liverpool taking all three points at Selhurst Park and afterwards he was singled out for praise by his manager.

"I don't know a lot of defenders in the world that can defend Benteke 100 per cent of the time, clearly without a foul," Klopp said.

The 27-year-old is equally impressive when it comes to the other side of the game, too. He has made more passes (256) than any other defender in the Premier League and is more than comfortable transitioning the play from defence to attack quickly, having completed more long passes (19) than any of his peers. 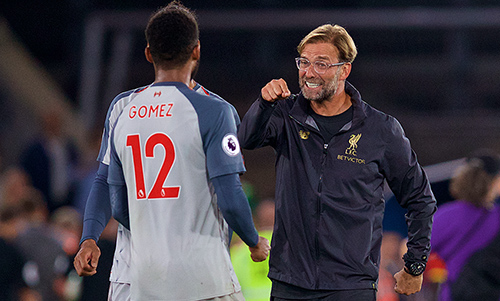 Naturally a centre-back, Gomez had played 35 matches of his 44-game Anfield career as a full-back prior to this season.

Given his chance alongside Van Dijk at the start of the current campaign, he seized the opportunity, leading the team in defensive clearances against both West Ham and Brighton.

At 21, and relatively young for a centre-back, the Seagulls singled out Gomez on Saturday, but it was a challenge the No.12 came through in typically assured style.

"He has been very good and today was a big test," Klopp said after the match.

"Obviously Brighton thought 'let's pick Joe Gomez for the long ball challenge with Glenn Murray' and Joe did really well. I don't think he made one foul. He won maybe 70-80 per cent of those duels."

And as with his centre-back partner Van Dijk, Gomez can play with the ball at his feet, too. 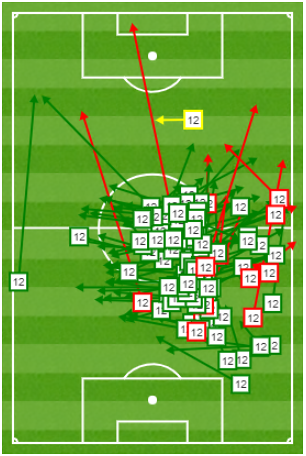 He is the youngest Liverpool player to attempt more than 100 passes in a Premier League game and has done so on three occasions, including 104 against Brighton. 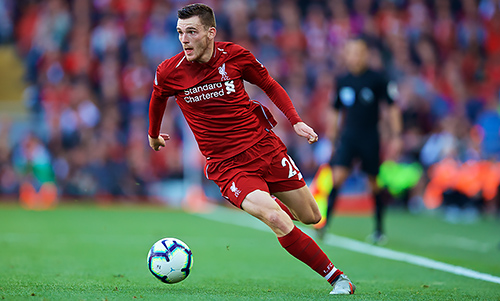 Since making his debut for the Reds in August last year, former Hull City left-back Robertson has gone from strength to strength.

Solid in defence, he also provides an attacking threat down the left flank and it was his overlapping run and low cross that presented Salah with a tap-in for the first goal against West Ham on the opening day.

In fact, only Salah (12) has created more chances for his LFC teammates than Robertson's nine this season.

The Scotland international has also created more than any other defender in the top flight, with Watford's Jose Holebas the closest on seven.

Against Brighton, Robertson set up three chances for Roberto Firmino alone and but for an outstanding save from Seagulls stopper Mathew Ryan would have notched his second assist of the campaign.

Last season, the 24-year-old provided the key pass for five league goals, which ranked him highly among his fellow full-backs.

However, Robertson produced that quintet of assists in just 22 top-flight matches to give him the best assists per game ratio of his peers.