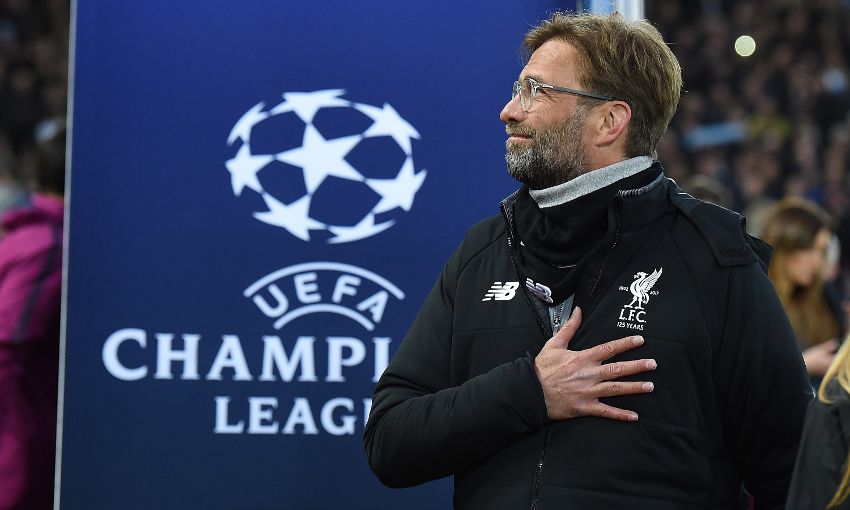 Jürgen Klopp offered his reaction to Liverpool’s pairing with AS Roma in the Champions League semi-finals and highlighted the difficult challenge his side will face in their attempts to take the next step in the tournament.

The Reds were pitted against the Italian team in Friday afternoon’s draw, with the first leg due to be played at Anfield on Tuesday April 24 and the return at the Stadio Olimpico on Wednesday May 2.

The Serie A club staged a stunning fightback against Barcelona on Tuesday to book their berth in the last four – and Klopp is under no illusion about the size of the task that Liverpool will come up against.

Speaking to Liverpoolfc.com immediately after confirmation of the tie, the boss said: “Because I knew I’d have to say something after it, I tried to think about what I feel, but it was not that I thought ‘Thank God not Bayern, thank God not Real Madrid, yippee Roma’ or the other way around.

“It is just the draw and I know it is very exciting, but it is good because the most important news is we are still in the competition. Whichever opponent we would have got, I would have said there is a chance because it is football – so there is a chance against Roma.

“But if anybody thinks this is the easiest draw then I cannot help this person; they obviously didn’t see both games against Barcelona. In the first result, the 4-1, it was not like the game was – it was Messi genius against a good side of Roma. The second leg was outstanding, it was outstanding what they did. They should have probably won four or five-nil – I was really impressed.

“It is work and no problem with that and now we are looking forward of course to the first game.”

It’ll be the first time Liverpool have come up against Roma in competitive action since 2002 when they faced off in the Champions League.

However, for Klopp, it’ll be the first time he’s ever encountered I Giallorossi.

“I have never been to Rome before, not even as a tourist, so it will be completely new for me,” he said. “I’ve played against Bayern a few times, obviously, and I’ve come up really often against Real Madrid.

“From an excitement point of view, it’s really cool because I’ve never played in Rome. It’s a beautiful city for sure, but we are not there for sightseeing.”

One man who knows all about Roma is Mohamed Salah, who spent two seasons with the club before his transfer to Anfield last summer.

“For sure it will be interesting for Mo, but that shows all the quality of Roma,” said Klopp. “Everybody knows how big Mo’s impact on our season has been – and they’ve played a season without him. Where would they be if Mo was still there?

“It makes it a really interesting thing and for him, it will be 100 per cent special. He is already of interest wherever we go, but it might go crazy when we go to Rome! He can deal with that, I am sure.”

Tough draw.... Roma showed what they can do v Barca - this tie will have amazing atmospheres both home and away #YNWA

Klopp doesn’t believe the draw pitting Liverpool at Anfield for the first leg will have any bearing on the outcome of the tie, considering some of the results that were achieved in the competition at the quarter-final stage – including the Reds’ own win against Manchester City.

“I think they will think it is an advantage, but it all depends on the first result. Of course, whatever happens, as long as you are in the race there is always a chance wherever it is, so I am fine with it. You cannot change it. It didn’t create reaction at all. First leg at home, I am really looking forward to it because it will be a special atmosphere. It’ll be great.”

Liverpool still have plenty of work to do before they face Roma, starting tomorrow against AFC Bournemouth at Anfield as they look to maintain their push for a top-four finish.

“It’s really intense and we have a lot of important games to play, and in between [the two legs],” said the manager. “It’s all about focus and switching on. Now it is Bournemouth tomorrow. People might start dreaming about Champions League games, but this is the real work to do.

“Bournemouth are in a good moment and I have not enough words for saying my respect for Eddie Howe; what they are doing there is unbelievable. In this difficult league, to be pretty much safe for next year this early is really a special thing – they have all of my respect.”