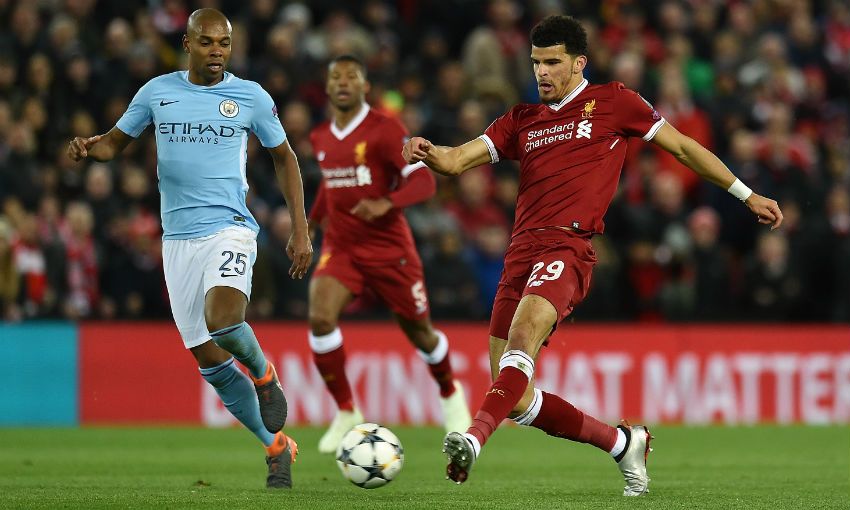 Jürgen Klopp's instructions to Dominic Solanke before he entered the maelstrom that was Liverpool versus Manchester City were simple.

Solanke got the nod to replace Roberto Firmino and played amid what he described to Liverpoolfc.com as ‘the best atmosphere I’ve seen’.

The Reds were, of course, leading 3-0 thanks to a devastating 19-minute spell in the first half that included goals from Mohamed Salah, Alex Oxlade-Chamberlain and Sadio Mane - and Klopp felt his No.29 could play a part in ensuring his side went into Tuesday’s second leg with that advantage intact.

“To just hold up the ball, really,” Solanke said, regarding what his manager had asked of him on the touchline before his introduction.

“Make sure that we keep the pressure on, don’t let them get too much of an advantage. We knew that we were a big scoreline up so we wanted to keep that for the second leg. We managed to keep a clean sheet so it worked.”

Solanke’s overriding emotion at being beckoned to come on was one of ‘excitement’.

“I think those games are difficult,” the England youth international, who played the full 90 minutes of Saturday’s 0-0 draw with Everton, continued.

“Everyone worked so hard and when it’s a scoreline like that they’re always going to be applying pressure, so we needed to try to make sure they didn’t break through and we managed to do that so I hope I helped with that.”

After their irresistible attacking display in the first half at Anfield, Liverpool showcased impressive defensive organisation and stubbornness to keep City at bay following the interval.

That, Solanke feels, will stand the Reds in good stead for the test to come at the Etihad this week.

“It shows that we can go and attack - our attacking quality is crazy and we know that we’re always going to score goals - but for us to defend like that as well shows that we’re ready for that,” he noted.

“It’s not going to be easy but I’m confident we can get the result.”

Fancy watching the second leg on the Kop? Click here to buy tickets for our live screening at Anfield>>>