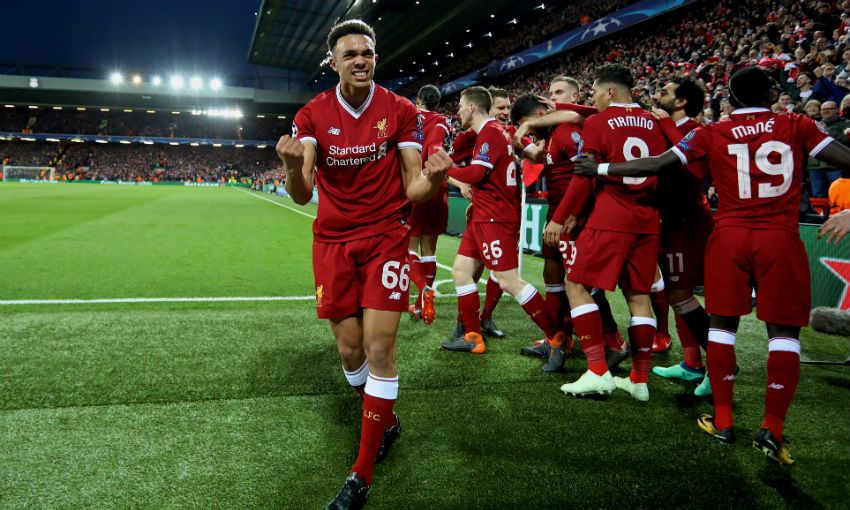 Liverpool produced a stunning first-half display to record a 3-0 victory over Manchester City in the first leg of the Champions League quarter-final at Anfield on Wednesday night.

In a scintillating opening period from Jürgen Klopp’s side, Mohamed Salah struck the game’s first goal, profiting from Roberto Firmino’s persistence inside the area to nudge in from close range.

Alex Oxlade-Chamberlain then rasped in a second moments later when he took aim from 20 yards and arrowed into the corner, before Sadio Mane headed in the Reds’ third before the break.

Liverpool were dealt a blow when Salah was forced from the field in the early stages of the second half, and City applied heavy pressure as they sought to reduce the arrears.

However, the Reds were able to remain resolute to ensure they take a healthy lead to the Etihad for the second leg next week.

Liverpool made two changes to their starting XI as Dejan Lovren replaced the injured Joel Matip, while Oxlade-Chamberlain came in for Georginio Wijnaldum.

Academy defender Conor Masterson was named on the bench for a second time at senior level.

Anfield welcomed its first Champions League quarter-final tie in nine years in typically vociferous fashion as Liverpool aimed to make home advantage count in the first leg of the contest.

And after City dominated possession in the opening exchanges, the hosts served up an early sucker-punch as Salah opened the scoring with 12 minutes elapsed.

The Reds broke at speed via the Egyptian down the right, who in turn slipped Firmino into space in the area. His swipe was thwarted by a save from Ederson, but he reacted quickly and rode an attempted challenge from Kyle Walker to nudge the ball into the path of Salah, who prodded in his 38th goal of the season so far.

The Premier League’s runaway leaders almost mustered a quick riposte with a counter-attack of their own, but Leroy Sane struck wide from the edge of the area after carrying the ball from deep.

And Pep Guardiola’s side found themselves further behind on the 20-minute mark. Firmino appealed for a foul on the edge of the City area, but the referee elected to play an advantage – and Oxlade-Chamberlain collected possession 20 yards out and rasped an impeccably-hit effort beyond Ederson into the corner. 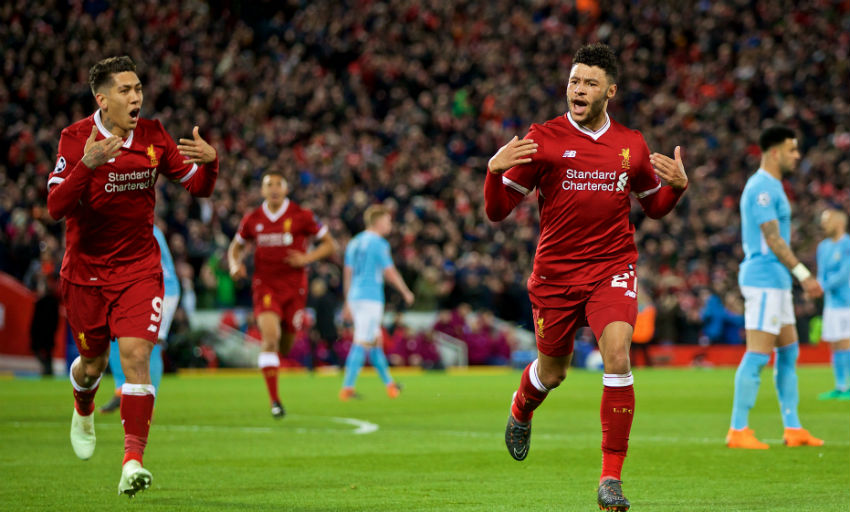 By now, Anfield was rocking – and Liverpool’s confidence was visibly growing, underlined – incredibly – by a third goal on the half-hour.

Salah was this time the provider as he scooped a ball from the right towards the back post, where Mane was on hand to nod downwards and in from six yards out.

It could have gotten even better, too. A typically lung-busting raid down the left from Andy Robertson took the full-back into the visitors’ area, but his final attempt was blocked by Fernandinho’s sprawling challenge.

Firmino then arrowed wide before Virgil van Dijk directed a header just off target, but the hosts returned to the dressing room with a handsome advantage.

Liverpool were undoubtedly looking to serve up something similar in the second period, but their plans were dealt a huge blow six minutes after the re-start when Salah was forced from the field. He was replaced by Wijnaldum, with Oxlade-Chamberlain moving further forward.

City had re-asserted themselves, too, forcing a series of corners and balls into the Reds’ area, with the dynamic of the contest having changed once more.

With 20 minutes remaining, Firmino was replaced by Dominic Solanke after a typically tireless shift leading the line. His first involvement was to drag a ball back for Mane, but he couldn’t connect properly under pressure from Walker and Ederson was able to make a routine take.

As the contest ticked towards full-time, Henderson was shown a yellow card that will rule him out of the return at the Etihad.

However, Liverpool held out to collect a deserved first-leg advantage ahead of a return in Manchester in six days’ time.

Watch the second leg live at Anfield in the Kop via a special screening. Click here for more details>>