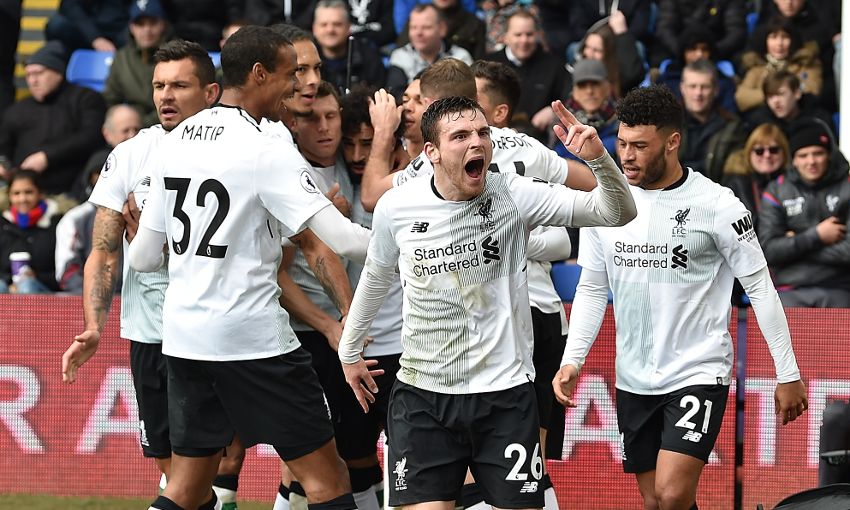 Mohamed Salah struck a late winner to give Liverpool a 2-1 victory over Crystal Palace at Selhurst Park on Saturday morning as they resumed Premier League duties.

In a keenly-fought contest, the Eagles took an early lead from the penalty spot as Luka Milivojevic successfully converted after Loris Karius had brought down Wilfried Zaha in the area.

Sadio Mane equalised four minutes after the restart when he attacked James Milner’s low cross at the near post to nudge home.

The Reds lost substitute Adam Lallana to an unfortunate injury in the second half, but they ensured they gained three points when Salah pounced to slot home a loose ball with six minutes left.

Liverpool made two changes as the injured Joe Gomez and Emre Can were replaced in the line-up by Trent Alexander-Arnold and Milner. Meanwhile, Nathaniel Clyne was included in the matchday squad for the first time this season on the substitutes’ bench.

Liverpool kicked off aiming to make a winning start to a pivotal 10 days in their season, but it was Palace who fashioned the game’s first chance with eight minutes played when Zaha met Andros Townsend’s dangerous ball, stepped inside Alexander-Arnold and struck goalwards from 12 yards. Thankfully, Karius was able to block the attempt with his upper body.

Then, at the other end, the Reds created an opportunity of similar danger as Virgil van Dijk planted a header towards goal from Salah’s corner. Mane flicked it on in front of Wayne Hennessey, but an inch wide of the post.

From the resulting goal-kick, the hosts were awarded a penalty when Zaha was brought down by Karius after nudging the ball high over the ‘keeper’s head having found space on the left corner of the area to reach Benteke’s flick-on.

Milivojevic assumed responsibility and clinically dispatched into the corner to put the hosts in front.

Liverpool had spot-kick appeals of their own waved away when Mane went to ground under an attempted challenge from James McArthur, while Salah’s neat turn and shot was too close to Hennessey.

Mane then had celebrations cut short when he nodded in from a flick at a corner, but the forward was flagged offside.

As half-time edged closer, nimble footwork on the corner of the area allowed Salah a shooting opportunity, but his attempted curler was grasped by Hennessey at the second attempt.

The home team’s custodian then ensured his side’s lead remained intact heading into the interval as he produced a fine stop to keep out Mane’s goalward glance from a corner.

Liverpool began the second period with assertiveness – and duly drew level four minutes after the restart.

Milner and Roberto Firmino combined before the former shimmied into space and crossed low into the six-yard box, where Mane stole ahead of Sakho to side-foot into the net.

The Reds were dominant, but they could have fallen behind once again with Benteke spurning two gilt-edged chances in quick succession.

First, he scooped over the crossbar after escaping beyond Joel Matip to meet a ball into the area before firing well over after Townsend had escaped into space down the right and pulled it back for the striker.

Patrick van Aanholt then had a free-kick punched around the post as Palace fought their way back into the contest and threatened a second.

Jürgen Klopp’s response was to send on Lallana and Alex Oxlade-Chamberlain for Mane and Georginio Wijnaldum.

However, Lallana’s involvement lasted a mere matter of minutes as he was dealt a cruel injury blow, sustaining an unfortunate knock when challenging for a ball that resulted in him needing to be replaced prematurely.

As play continued, Salah was just a fraction away from meeting Milner’s lay-off six yards out, while Firmino couldn’t quite reach a cross from Alexander-Arnold unmarked at the near post.

But a breakthrough was made on 84 minutes – and the identity of the man making the decisive contribution came as no surprise as Salah swept in his 37th goal of the season after the ball broke for him inside the area.