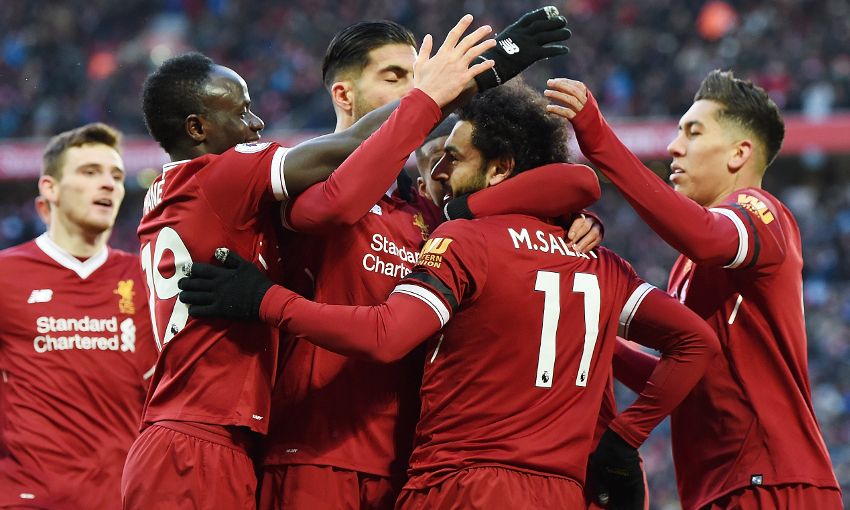 Mohamed Salah scored four as Liverpool returned to third place in the Premier League table with a 5-0 victory over Watford at Anfield on Saturday evening.

The Egyptian opened the scoring with just four minutes gone with another fine solo effort to add to his ever-growing collection.

Salah netted a second just prior to the interval, benefiting from Andy Robertson’s precise delivery from the left to tap home from close range.

Roberto Firmino got in on the scoring act shortly after the break when he backheeled in from a cross from the No.11.

Salah wrapped up his treble – his first hat-trick for the Reds – on 77 minutes, nudging the ball home after twisting and turning inside the box.

And he wasn’t done there, as he lashed in a fourth after Danny Ings had been foiled by a save from Orestis Karnezis to put the seal on a commanding victory.

With the other teams in the top six not in league action, the result moved Jürgen Klopp’s side back ahead of Tottenham Hotspur and into third place in the standings.

Dejan Lovren missed out due to a minor ankle injury.

Prior to kick-off, a minute’s applause was held in memory of former Red John Molyneux, who passed away earlier this month.

Once the action was under way, the snow showers that had blanketed much of the country throughout Saturday finally caught up with Merseyside come kick-off as temperatures plummeted inside Anfield – but the home side weren’t caught cold by the conditions as they took an early lead.

Few were surprised by the identity of the scorer as Salah took his tally for the season to 33, collecting Sadio Mane’s pass and bamboozling Miguel Britos to leave the Watford defender on the ground before stabbing beyond Karnezis.

However, the Reds also suffered an early setback when Can limped from the field after 27 minutes due to a knock. James Milner replaced the Germany midfielder.

Watford mustered their first effort shortly after, but Richarlison’s header was straight into the gloves of Loris Karius from Kiko Femenia’s centre.

At the other end, only a fine save from Karnezis prevented Firmino from doubling the hosts’ advantage following a speedy counter-attack.

However, Liverpool’s second duly arrived just before the break – and it came courtesy of a sublime move that sliced open their opponents.

Mane’s ball into space down the left was inch perfect, allowing Robertson to deliver a first-time cross into the middle, where Salah arrived to tap into the net from the edge of the six-yard box.

The Reds wasted no time in furthering their lead after the interval. This time Salah was the provider as he refused to give up on a ball heading into touch before crossing for Firmino to backheel across goal and into the far corner.

Watford threatened to reduce the deficit when Roberto Pereyra’s free-kick bounced off the top of Karius’s crossbar.

Firmino then spurned an opportunity when he nodded Gomez’s centre well wide of the far post.

Alex Oxlade-Chamberlain, on in place of Wijnaldum, stung the palms of Karnezis, before Salah completed his hat-trick 13 minutes from time.

The forward was persistent as he turned one way and then the next inside a crowded box before he eventually prodded into the goal from 12 yards.

And Salah wasn’t finished as he slammed in goal No.4 of the evening before the conclusion after Ings was denied a goal by a close-range save from Karnezis to cap a superb night’s work at Anfield.