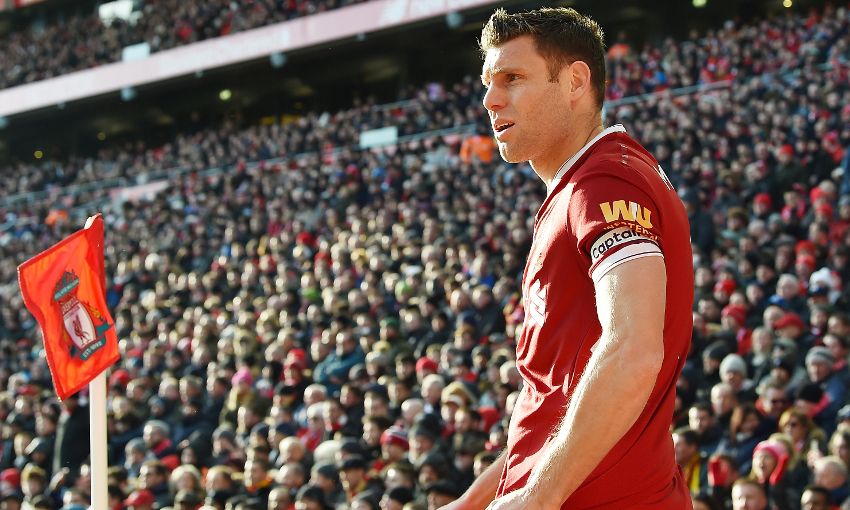 Alex Oxlade-Chamberlain has joined the list of those saluting the outstanding contribution James Milner has made this season – and he's even happy to hear his teammate boast about his Champions League assist record.

The vice-captain produced another all-action display in Saturday’s 4-1 victory over West Ham United at Anfield, continuing an excellent sequence of form in midfield.

However, Oxlade-Chamberlain insists it’s not just Milner’s defensive impact and leadership qualities that deserve plaudits – he also feels the 32-year-old’s influence in an offensive capacity for Liverpool has been crucial.

And while that may not always be highlighted outside of Melwood, the squad are in no doubt about what he adds to the Reds’ attacking thrust.

“I think he’s been brilliant all season,” Oxlade-Chamberlain told Liverpoolfc.com. “Millie is one of those sort of players that is so honest and hard-working, he allows people around him to go and do the nice and pretty stuff.

“He is the workhorse and engine, but a lot of his technical ability and things he’s been doing have gone unnoticed. In games where we’ve maybe scored seven goals and the front three have scored maybe two or a hat-trick [he’s contributed to it].

“I even think Millie was playing left-back in a Champions League game and got three assists in the second half or something silly. That stuff goes unnoticed; his work in Porto, he played amazingly well in that game – really important going forward and set up some crucial goals. I saw his stats for his Champions League assists… it’s brilliant!

“For as much as we need him to be doing the leadership role, keeping everyone working in good formation and organised, I think a lot of his technical play and contribution to attacking play can go unnoticed sometimes – but within the team, we all notice it and we all know what he can do.

“He has been a massive player for a number of years at massive clubs; he’s won titles, so we need people like him in the squad. He’s been brilliant the last few weeks, but he’s been a massive part of the team since I got here and he’s a big character on and off the pitch for us, someone we definitely need.”

LFCTV GO: Oxlade-Chamberlain on Milner's form and settling into midfield

Indeed, no player has made more assists in the Champions League so far this season than Milner, who has laid on six goals for his teammates in the competition.

And as revealed by Jordan Henderson recently, Oxlade-Chamberlain has confirmed he isn’t shy about making his colleagues aware of that statistic.

“When we were in Spain at the training camp, it was brought up a good few times by Millie – I won’t lie,” said the Reds’ No.21 with a laugh. “But he’s earned the right to do it, we’re more than happy to listen to it because he’s been brilliant in that competition, setting the goals up for the boys up front from different positions.”

Oxlade-Chamberlain has found himself lining up alongside Milner as part of Liverpool’s midfield three on several occasions this season.

Reflecting on his own performances, the 24-year-old is pleased with how he’s adjusted and developed in the position, but feels he has much more room for improvement.

He said: “I am really liking it. It’s somewhere that I wanted to keep developing my game. I am always learning and trying to find ways of doing things differently.

“Sometimes there’ll be teams that close off the midfield a little bit more, so you’ve got to find other ways of finding space in there.

“I am more on the right side, so I work with Mo and we change positions – so sometimes I end up out wide and he’s more inside. I am always learning on how to develop my game in that position, both attacking-wise and defensively as well. We’ve got great players who can play in midfield here who all bring different attributes, so I learn from everyone.

“It’s been really enjoyable and a good experience, learning, and I feel I am getting better and better in there – but there is still room for me to improve. It’s all about trying to affect the game as much – and as often – as possible from there, that’s all I’m trying to do.”