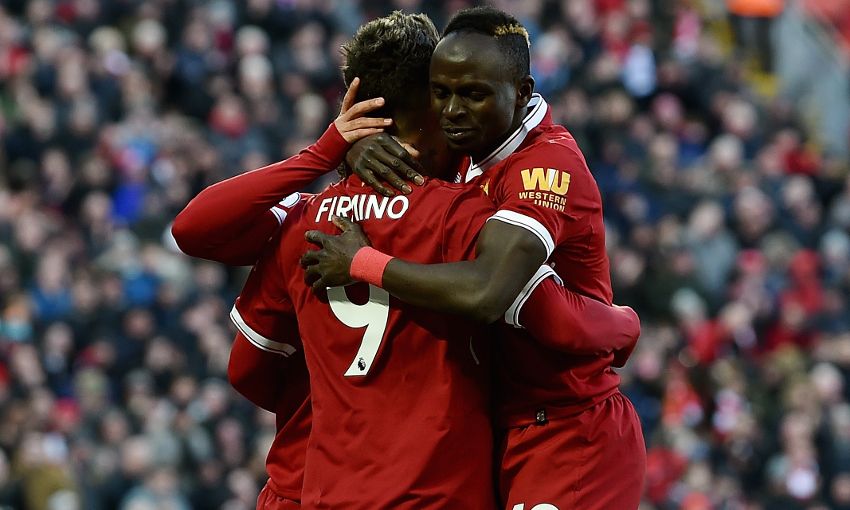 Alex Oxlade-Chamberlain has described the collective impact of Mohamed Salah, Sadio Mane and Roberto Firmino as 'frightening' after the trio took their goal tally for the season to 66 last Saturday.

Each member of the forward line converted in Liverpool’s comprehensive 4-1 victory over West Ham United at Anfield, continuing their outstanding scoring streak. The triumvirate have ousted the opposition defence 16 times alone in the Reds’ last six matches.

“It’s frightening,” said Oxlade-Chamberlain as he reflected on their explosiveness during a conversation with Liverpoolfc.com at Melwood. “There won’t be too many trios in Europe that can muster up those sorts of numbers.

“They’ve been brilliant for us in front of goal, but defensively as well they know their jobs, they work really hard and they’re really good, honest lads and good to be around.

“They’re the type of lads that you really want to see succeed and do well, and you want to do everything you can to help them to achieve their goals and ultimately to help the team achieve all of our goals.”

Often tasked with operating behind the front three and supplying the ammunition for their attacking thrust, Oxlade-Chamberlain explained how their movement and flexibility helps make them so devastating to the opposition.

Indeed, the No.21 feels the ability to mix up their approach in breaking down defences is what makes them so difficult to thwart.

“Bobby is such a quality striker, especially in our team – he fits the team so well,” Oxlade-Chamberlain continued.

Exclusive: Ox on LFC's front three and combining with Salah

“We’ve got Danny Ings and Dom Solanke that do it really well as well, defending from the front. They all work hard. Bobby is one of the best I’ve seen at winning the ball back from the front; he presses people from their blind side and they don’t know he’s coming and he wins it back.

“He’s really good at dropping in as well; he can play as a false nine where he is not always so high, he drops in, comes short for the ball and that opens up the space for Mo and Sadio to run in behind.

“The three of them work really well and when they’re playing the way they can, when Bobby is coming deep and the other two are running in behind, it gives you so many options to play in behind or to feet to link up with them.

“When they’re on song, there is no three you’d rather have in front of you.”

Meanwhile, Oxlade-Chamberlain has provided details on the half-time conversation he had with Salah against West Ham, which sparked jovial scenes when the pair combined for Liverpool’s second.

The Egyptian recorded his 31st strike of the season, taking a touch before steering the ball across goal and into the bottom corner after being supplied by the midfielder from the edge of the box.

The duo’s celebration seemed to point to an in-joke, which was later confirmed by a photo of the moment on Oxlade-Chamberlain’s social media accounts, which was captioned: ‘When Mo Salah asks for the assist at half-time’.

He explained: “Myself and Mo are always joking throughout the week about setting each other up during games.

“It’s an ongoing joke we have between us and I think there was a moment in the first half where I drove forward with it and he wanted the ball, but I was tackled.

“So at half-time he came up to me and had a little joke. He asked for an assist in the second half, so I said, ‘OK, I’ll look for you in this half’.

“Not long after half-time, I managed to get one through to him and he scored it. It came together nicely.”