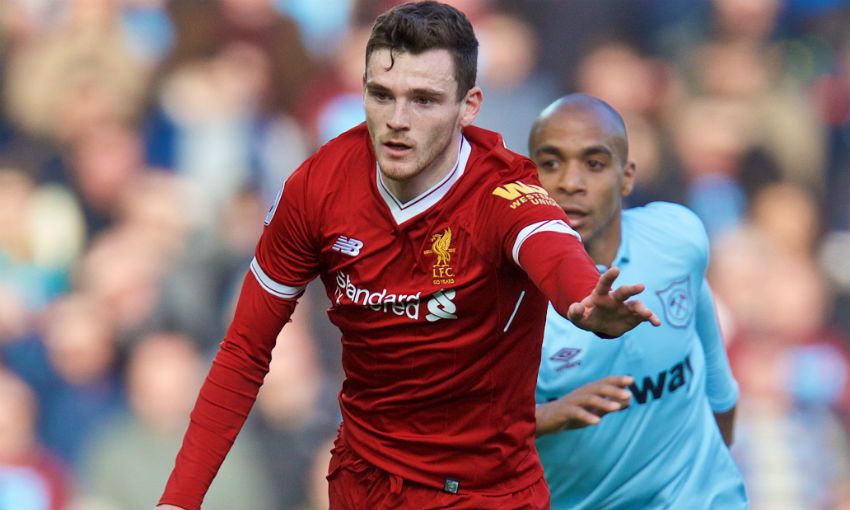 Andy Robertson cited the hard work he has put in at Melwood as the reason for his impressive form following another assured display against West Ham United.

The left-back has now started 15 of Liverpool’s last 16 matches in all competitions after completing the full 90 minutes of Saturday’s comfortable 4-1 victory over David Moyes’ team at Anfield.

Typical defensive diligence was supplemented by regular examples of dangerous attacking play from Robertson as the Hammers were dispatched comprehensively, and he registered an assist with an excellent cross for Sadio Mane’s goal that rounded off the win.

An injury to Alberto Moreno in early December offered the No.26 the opportunity to stake his claim to be a regular fixture in Jürgen Klopp’s side - a chance he has seized with a series of consistent performances.

Robertson was asked to reflect on his campaign so far following Saturday’s game and revealed that early-season discussions with the boss, allied with time well spent on the training pitch, have helped him blossom.

“At the start of the season I had to be patient. I’m not one of those people who will go in and start telling him [Klopp] I should be playing, it was more: ‘What can I do? What do you think I’m lacking that I need to get in the team?’,” the Scotland international told Liverpoolfc.com.

“He told me a few things that will obviously stay between us that I had to work on, I worked on them in training but Alberto was playing well, you can’t hide away from that fact and it was unfortunate that he got injured.

“It was great to see him out there today and getting the last 10 minutes. I’m sure he’s frustrated as well, but it’s a squad game and we’ll need everyone. But for me, playing week in, week out just now is a really pleasing thing and I’m building in confidence.

“I feel at home now, which did take a wee bit of time, but I’m happy to be here and I just hope that I can keep kicking on.”

Klopp praised his players for the character and perseverance they showed against a resolute West Ham outfit, and Robertson echoed those comments.

“We knew how difficult it was going to be,” he said.

“West Ham are on a really good run of form since David Moyes came in and they’ve climbed the table, so we knew how tough it was going to be, we knew they’d play five at the back, which is always tough to play against but luckily we’ve got an early goal and that settled us down.

“It meant we didn’t have to force it or anything like that and then three more followed, which is always pleasing.”

Emre Can’s 29th-minute opener represented Liverpool’s 100th goal of 2017-18 in all competitions, a tally that would rise to 103 by full-time thanks to second-half strikes from Mohamed Salah, Roberto Firmino and Mane.

“It’s brilliant,” Robertson replied, when it was put to him that the Reds have reached triple figures in goals scored.

“We’ve not struggled in front of goal, which is always pleasing, but we need to keep that going and we’ve been more solid as the season’s gone on at the back with everybody playing together and gelling.

“Obviously their goal’s disappointing but we’ve only lost one and we’ve scored four, so we’ll take that and the front three were brilliant today. I think there were a lot of good performances today.”

Newcastle United visit Anfield next Saturday, and Robertson is eyeing another win to further strengthen the Reds’ bid for a top-four finish.

“We can’t let our standards drop, our standards have been so high this season - with a few blips, of course - but it’s a long season and we need to keep going,” he continued.

“We’ve put ourselves in a good position but it means nothing if we don’t capitalise on it. We’ve got however many games are left and they’re all going to be cup finals for us.

“We need to keep going, the next game’s Newcastle and we’ve got a whole week to prepare for it, so we’ll be ready and if we show up like that I’m sure we’ll create chances and hopefully get the three points.”