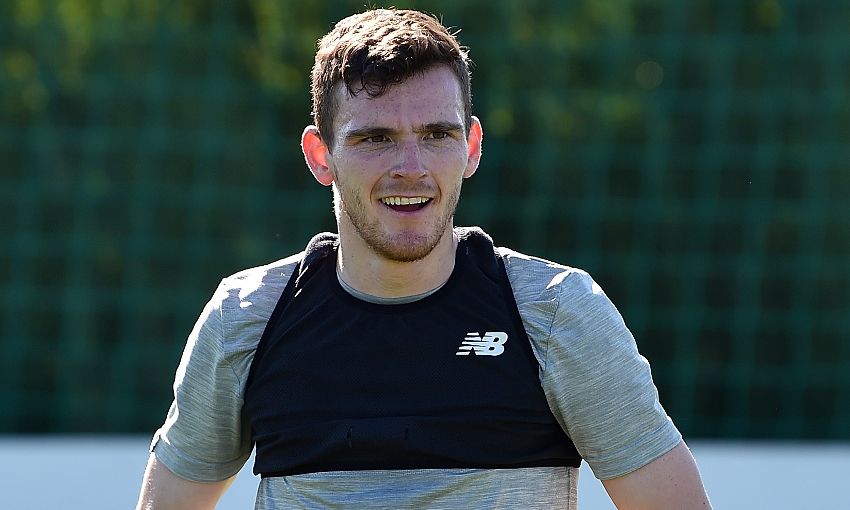 Jürgen Klopp believes Andy Robertson enjoyed his best game for Liverpool so far in Wednesday's 5-0 win over Porto, describing the defender's performance as 'the whole package'.

Making his Champions League debut, Robertson was irrepressible on the left-hand side of the Reds' back four as they carved out a huge first-leg lead in the sides' last-16 tie.

Fans and pundits alike have paid tribute to the Scot in the aftermath of his brilliant showing in Portugal - and the quality of his contribution was not lost on the manager, either.

"We didn't speak before the game about his debut, we handled it like business as usual, and he did really well.

"I saw him in the dressing room before the game deep breathing - it's special, it's really special.

"At the end it's only a football game but we are all human beings and we are [affected] by different circumstances and when you hear the Champions League song before the game...

"I remember my first time, it was really different to all that you've had before because for a football player it's a dream.

"When he played in Scotland or in Hull it was quite a distance to go to a Champions League tie and now he played it - and in that manner, even better."

Robertson endured a slow start to his Liverpool career following a summer move from Hull City, making just three appearances over the course of the first 22 fixtures of the season.

But, having taken the chance afforded him by injury to Alberto Moreno, the 23-year-old has featured in 14 of the subsequent 17 games, performing impressively throughout.

Klopp insists Robertson needed time out of the starting XI in the early part of the campaign in order to adapt to new demands and feels that patient approach is now paying dividends.

The boss added: "The way people talk about Alberto Moreno, I hope it has settled a little bit but it was never fair, that's just how it is.

"If you see Alberto Moreno training, there's nobody in the squad has a shadow of a doubt about him quality-wise.

"He's an unbelievably strong player and he didn't deliver all the time, that's true, but at the beginning of the season he was so strong for us.

"There was one game where he dropped and everybody was saying it was exactly like it was before.

"Obviously, life as a football player is not always fair, but in that time if we would have played Robbo instead of him - no chance to convince anybody, he was not ready for that.

"That's no problem, it was a big step to come to Liverpool, but he needed the time and he used the time. Well done, I have to say.

"We are already convinced when we sign the player; 'Come in, we want you to make us stronger, if immediately, good, if not, then we have to work for it'.

"That's why we have more than 11 players and, thank God, in the moment Alberto got the injury, Robbo stepped up. It was lucky to be honest, it was exactly the right timing.

"Now Alberto has to fight, no doubt about that, but we need two left-backs, we cannot go into the season with one."

With Moreno now back in the fold after recovering from his ankle problem, Robertson faces tough competition to maintain his place at left-back.

Klopp admits it can be difficult to keep every player happy when he faces these sorts of selection decisions each week but is adamant he gives everyone a fair chance to stake a claim.

"It depends on the situation. If I feel it is unfair that he is not in the squad then I speak, but usually it is all about the team for the weekend," he continued.

"If somebody thinks something is wrong with my decision you can come in my office after the game and we can talk about it.

"Most of the time, the answer is easy, I decided on 11 others or 16 other players, that's how it is.

"It's always the job for the player to convince me because I'm completely open, who convinces me is in.

"But at one time, as I said before the Porto game, there was no player who didn't convince, but they still had to go in the stand.

"That's sometimes hard but, in the long term, they will all get the benefit for sure.

"We have quite a good relationship but at the weekend when I make the squad I'm not the best friend of all of them for sure."

Andy Robertson on last-16 target and facing a European giant