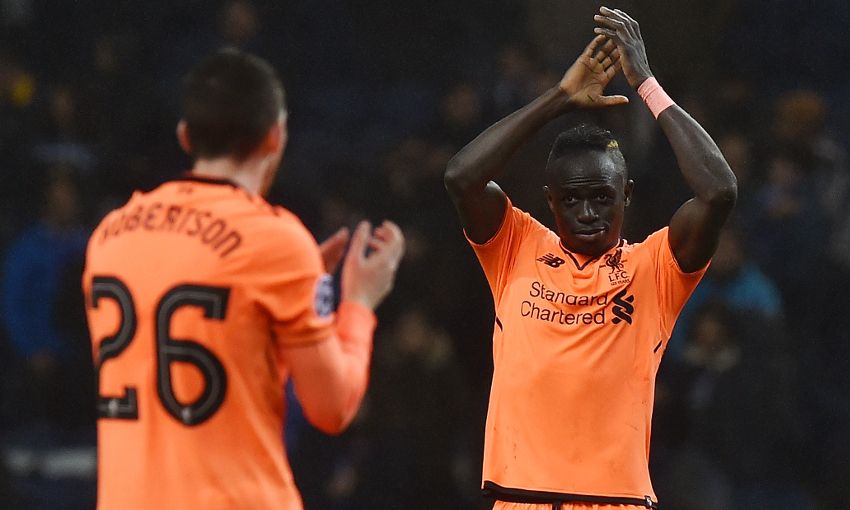 Sadio Mane almost missed out on a special souvenir after notching a hat-trick against FC Porto – but Andy Robertson ensured the Liverpool forward took home the match ball.

Mane was the chief protagonist in a Champions League tie that simply could not have gone better for Jürgen Klopp’s side at Estadio do Dragao in Portugal.

The forward benefited from a goalkeeping fumble for his low shot that opened the scoring, but the visitors took full advantage from then on and he weaved two more strikes in between goals from Mohamed Salah and Roberto Firmino to rack up a 5-0 scoreline in the last-16 first leg.

With the treble achieved, Mane was entitled to claim the match ball come full-time, but only with a little help from the eagle-eyed Robertson.

“I had to go running after the ball boy for his ball at the end – he was nearly upset! Luckily, I managed to get it. They were three class finishes from him,” the left-back told Liverpoolfc.com.

“Mo and Bobby have stolen the headlines in the last couple of weeks. But Sadio is on my side [of the pitch] and he is a workhouse, he works so hard. He took the limelight and got his three goals.”

Liverpool’s performance was a perfect blend of resolve and ruthlessness.

After taking control of possession in the early stages at a ground where Porto had lost just once all season, Klopp’s men moved through the gears to canter in the second half.

“We just didn’t let them settle. Their fans tried to make it a bit hostile at the start, and we managed to quiet them very quickly,” explained Robertson.

“That’s the key to playing away. If the fans are on their own team’s back instead of ours, we’ve done our job.

“In the first five or 10 minutes we kept the ball and settled down and they let us have it. The first goal completely calmed everything down – and we never looked back.

“We were spot-on from the get-go. We were first to every second ball. We created chances and kept chances out, I don’t think they really had any clear-cut ones.

“They had a few half-chances but other than that, it was a perfect away performance. When the chances came, we took them.”

The emphatic result continued Liverpool’s remarkable record when playing in their third kit this season, with 24 goals scored in its six outings so far.

“Maybe teams think we’re too bright to come near us, maybe we’re doing something to their eyes!” joked the Scotland international.

“This kit has been quite lucky for us – long may it continue.”