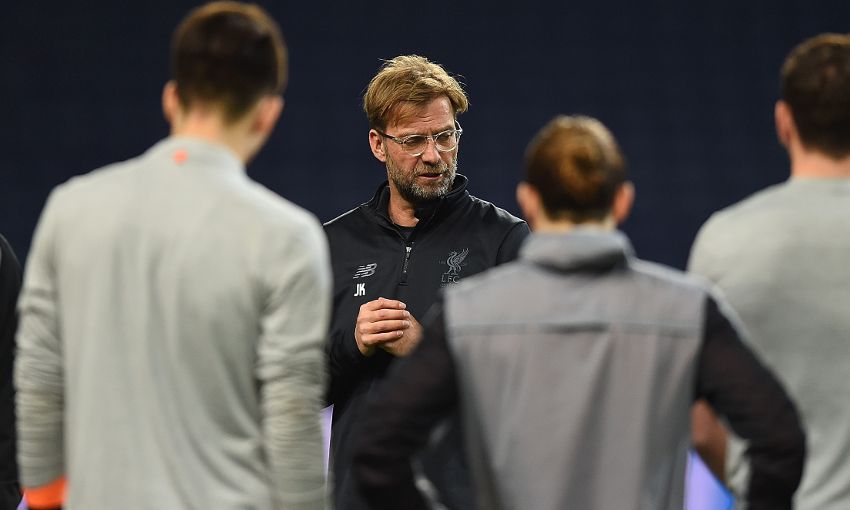 Liverpool will be without Emre Can and must check on the fitness of Joe Gomez for Wednesday's Champions League clash with FC Porto.

With a four-day training camp in Spain to follow the first leg of the last-16 tie, Jürgen Klopp named a 25-man travelling party for the trip to Portugal.

Can was among the Reds contingent but is suspended for the game at Estadio do Dragao after collecting three yellow cards during the tournament’s group stage.

Gomez has missed the previous two matches but Klopp is hopeful of having the defender available for selection if needed.

“Joe needs to have a test tonight,” the boss told Liverpoolfc.com during an extended interview on-board Tuesday’s flight from Merseyside.

“It depends on how he looks in training and then I will start thinking about it. I don’t want to make pressure or rush him; it would be cool if he is available but we will see.”

The manager also revealed that centre-back Ragnar Klavan is fit.

Jordan Henderson is in contention again after staying at Melwood as Southampton were defeated 2-0 on Sunday, to build up fitness following his spell out with a hamstring injury.

Danny Ings and Virgil van Dijk were added to Liverpool’s Champions League squad this month and are therefore eligible for the remainder of the team’s participation in the competition.

Right-back Nathaniel Clyne, who has missed the entire campaign to date, travelled to Portugal after returning to full training this week though is not yet an option for Klopp.

Porto have been boosted by the return of Ivan Marcano. The centre-half has not featured for three weeks because of a thigh problem but is in line for a comeback against the Reds.

Elsewhere, however, central defender Felipe serves a suspension for his straight red card in their final Group G outing, and midfielder Danilo is unavailable due to a calf injury.

Andre Andre recovered from a knock to re-join training with his teammates ahead of the game, while Vincent Aboubakar – scorer of five goals in the group stage – is a doubt with a muscle complaint.

“Liverpool have the second-best attack in the Premier League. They are also good in terms of consistency,” said Porto boss Sergio Conceicao.