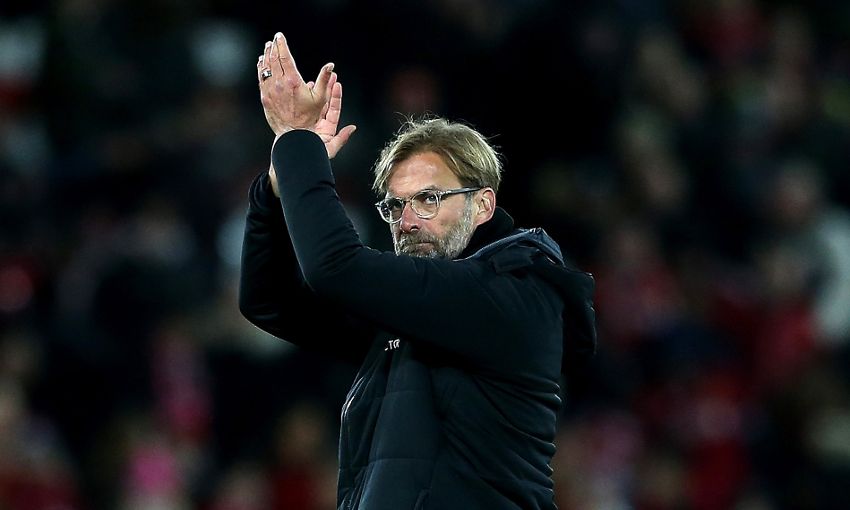 Jürgen Klopp believes a special Anfield atmosphere in Liverpool's final home game of 2017 can aid his team as they tackle two Premier League matches in 48 hours.

The Reds host Leicester City this afternoon in the first of a quickfire festive double-header which sees them travel to Burnley on Monday too.

Klopp thrived on the noise as his team put Swansea City to the sword with four goals in the second half last time out – and hopes similar help from the stands can top up the players’ energy levels.

“Today and the next 48 hours are a big test for us and one I hope we can attack head-on,” the manager writes in ‘This is Anfield’.

“There is an English phrase I like, where you can be described as sounding like a broken record, and I’m sure there will be those who throw that at me for bringing this up again. It is not because I want to use it as an excuse. Leicester also have to contend with this, and give or take a day’s rest so do most teams. So 100 per cent there is no excuse for me or the players.

“My point is more about the expectations on the players and the effects on how they can perform. The way I see it is that the fans of Liverpool and Leicester, and Burnley who we play on Monday, deserve to see the very best of the team they sacrifice so much to support. The fans who watch on television or follow through other means want to see the best quality also.

“I raise this because people must factor it in when judging the players of all teams, not just Liverpool, over this period. It is not about feeling sorry for us. The rewards we get for doing this job mean we have long since lost any right for ‘sympathy’ – and expecting it would be crude and wrong. It is about context and understanding.

“For us, I see it as a challenge for the players, and for a manager and the staff it is a case of working to find the right solution for each game. That’s what we must do now and it is made easier because we will have a really hungry squad of players and the backing of our incredible supporters, many of whom also dig deep financially and emotionally to keep being there for us and cheering us on.

“I loved how Anfield felt on Boxing Day. The noise and the energy in those final 30 minutes was amazing. With kicking off at 3pm today, against an opponent who will bring their own spark and zest, I think we can have an even better feeling inside this wonderful place if we choose to make it happen.

Pick up your copy of 'This is Anfield' at the stadium, or subscribe online here.