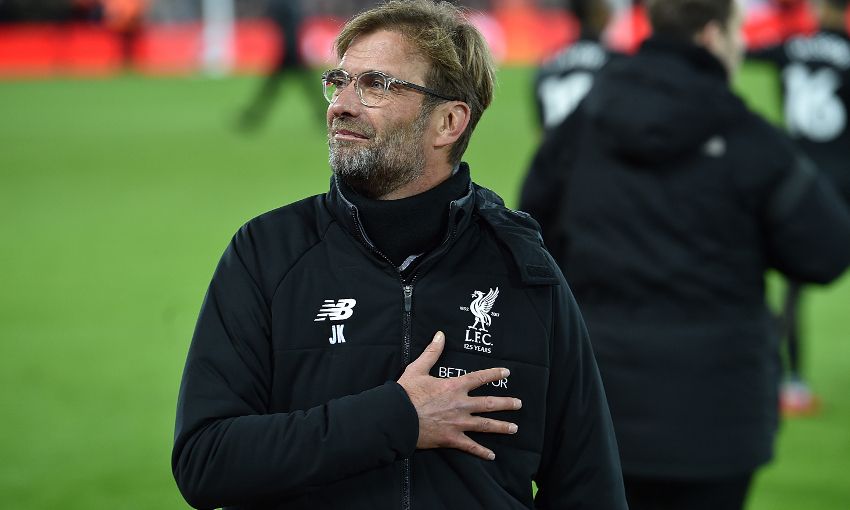 Jürgen Klopp praised a much-improved second-half display that was the key to Liverpool’s resounding 5-0 victory over Swansea City on Boxing Day.

The Reds took the lead early on at Anfield - courtesy of a wonderful strike from Philippe Coutinho - but, despite their near-complete dominance, had to wait until seven minutes into the second half to double their advantage.

Roberto Firmino did so with a calm volleyed finish, and Trent Alexander-Arnold rifled home a third just two minutes later with his first senior home goal for his boyhood club.

Firmino and Alex Oxlade-Chamberlain then completed a comprehensive win that moves the Reds back into the top four of the Premier League.

Post-match, as well as offering an update on the fitness of Jordan Henderson and Alberto Moreno, Klopp analysed Liverpool’s overall performance, discussed Firmino’s contribution and revealed what he said to Alexander-Arnold on the pitch after the final whistle.

Read on for a transcript of the boss’ press conference…

On Liverpool’s improvement in the second half…

It’s quite difficult, you can say a lot before the game in the analysis but it’s always different to see it in the game. Swansea is a different team to play against, they play real football so our main tool or weapon should have been today counter-pressing because you cannot come through with all the balls but very often if you lose the ball and then the next second it’s 80 yards away, but Swansea is playing football. Our timing was not good in the situations, our formation was not good in these situations [in the first half] and so we were always a bit too late and they could play. They didn’t get a lot of chances to be honest, they had one or two half-chances but it was quite intense so the way was always really long to come back into the right positions, the right situations.

Even in a not perfect, not really good first half, we had enough chances to score two or three goals so that should be enough. I was not disappointed or whatever at half-time [but] we had to defend the situations much better, we had to be more compact. In a few moments we were kind of man-orientated, that’s only allowed in our own box, so we had those few problems and we did better in the second half. I think we scored the first three goals after counter-pressing situations so that’s good, and then it looks like after the game it’s 5-0 and you think, ‘wow, easy game’ but it was not an easy game, it was really hard work and I have no problem with that, absolutely not. So I’m really happy about the things we learned from the game tonight. Now it’s a perfect result for us, nobody got injured as far as I know, very important three points, five goals, clean sheet, all good. 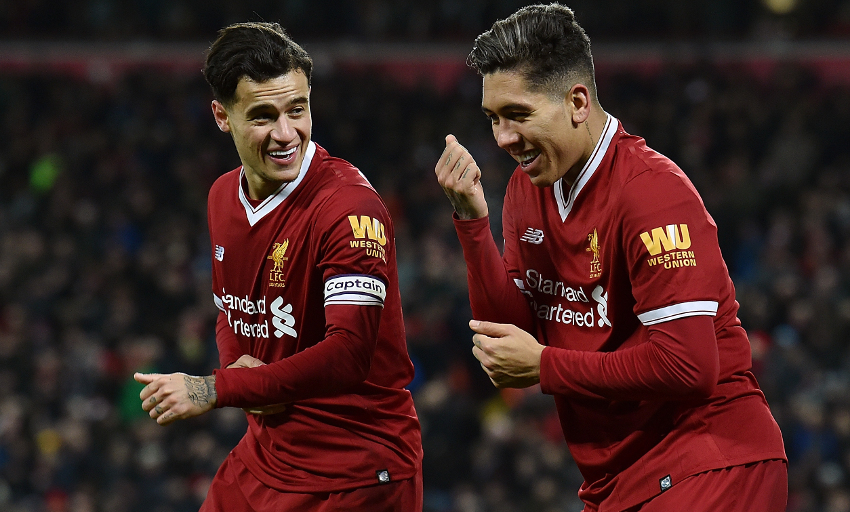 I am happy for all of the boys when they score but I couldn’t say how many he has or how many he has - I don’t care, to be honest, it’s not in my interest. If we play like we play in the good moments then the boys will be in different situations and it’ll be easy to score, like the second goal of Roberto tonight. Probably you could’ve scored this! No?! That’s a sad story! OK, I could have scored in this situation!

So that’s what you have to do, you have to work for that and everybody could see Mo was not the happiest person in the stadium when we took him off, but at least I have to stay kind of reasonable or serious or whatever because there’s a lot of games to come. They all will score goals. Sadio did not play tonight, but he will score if we play like this, if we bring the different players, in the different moments in the situation. Roberto, I appreciate always his effort and his performance, that he scores twice, I’m happy about that but I could not say how many goals he has scored so far in the season because I feel he is always involved, he is always in and around the really dangerous situations for the opponent. First half he helped left full-back to right full-back, he was everywhere. In the end he scored two goals, so that’s nice.

As a defender you cannot stay on the ground. The arm of I think it was Ayew touched a little bit the face of Trent, but as long as the nose is not broken or the nose is still where you think it should be you have to run again. For a defender especially, it’s not possible to do that. That’s all. But he is young enough to learn a lot of things, even though he is quite good in a few.