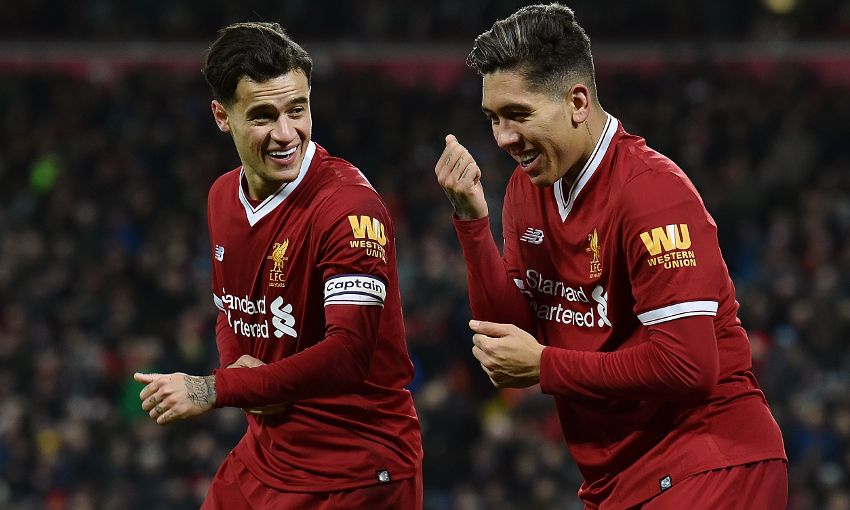 Roberto Firmino scored twice as Liverpool made an immediate return to the Premier League top four with a 5-0 win over Swansea City at Anfield.

The Reds had dropped down to fifth place after Tottenham Hotspur's victory against Southampton earlier in the day, but signalled their intention to quickly bounce back as they took a sixth-minute lead through Philippe Coutinho's brilliant long-distance strike.

Leon Britton's side showed fight as they kept things tight over the remainder of the first half, but were blown away in the second period as Firmino struck either side of a Trent Alexander-Arnold goal and Alex Oxlade-Chamberlain added another late on.

With Jordan Henderson sidelined by the injury he picked up against Arsenal, Jürgen Klopp was always going to be forced into making at least one change upon his side's return to Anfield.

He in fact made four in total, with Georginio Wijnaldum, Oxlade-Chamberlain, Joel Matip and Alexander-Arnold coming into the team in place of the skipper, Sadio Mane, Dejan Lovren and Joe Gomez.

The visitors came into the game having won just one of their last 11 Premier League outings, and the Reds wasted little time in capitalising on their fragile confidence.

Just six minutes had elapsed when Firmino won the ball high before feeding Mohamed Salah, whose first-time pass gave Coutinho space at the edge of the box.

The Brazilian made the most of the opportunity he had been afforded, blasting an unstoppable strike into the inner side-netting to put the hosts ahead.

But for a smart low stop from Simon Mignolet, the Swans might have responded immediately through Jordan Ayew's back-post header, and they built on that chance to play their part in an even half from that point on.

The balanced nature of the opening 45 minutes was underlined by the back and forth that followed, with Andy Robertson and Emre Can going close from distance for the Reds and Oliver McBurnie testing Mignolet before the hosts survived a scramble in the Kop-end box.

The best of the openings after the first goal came in the 45th minute, when Firmino deceived the last defender with a twist of the hips in the box but dragged his shot agonisingly wide.

Despite their dream start, the Reds would have no doubt been disappointed with their overall performance in the first half, but they quickly set about making amends in the second.

Firmino came inches from heading an Alexander-Arnold cross home just after the restart before Salah saw a curler from just inside the box stopped by Lukasz Fabianski - but the home fans wouldn't have to wait too long.

With just seven minutes of the second period having elapsed, Coutinho curled a self-won free-kick in behind the Swansea defence where Firmino met the ball with an emphatic sidefooted finish.

The hosts' confidence - and the quality of their attacking play - skyrocketed in the aftermath of the second goal, a fact that contributed to two further strikes being added in just two minutes.

The first came when Alexander-Arnold's sheer desire to reach a clearance at the edge of the area saw him win the ball before running on and smashing a shot in off the underside of the bar.

And the second saw Salah unselfishly square for Firmino to tap into an empty net after the Egyptian had been played in behind by a misplaced Swansea pass.

Klopp elected to make a string a changes after the fourth, with Adam Lallana, Dominic Solanke and James Milner all entering the field.

But it was a starter in Oxlade-Chamberlain who got the fifth, dinking a clever finish into the far corner from the right-hand side of the box after the ball had bounced up nicely.