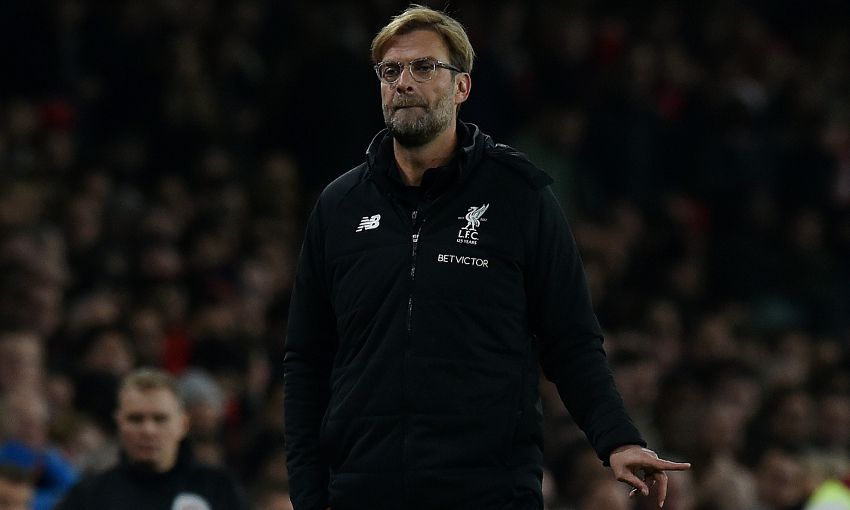 Jürgen Klopp believes Liverpool's performance warranted more than just the point it collected as they played out a pulsating 3-3 draw with Arsenal at Emirates Stadium on Friday night.

The Reds held a two-goal lead in London as Philippe Coutinho’s header put them in front during an impressive first-half showing before Mohamed Salah’s deflected effort furthered their advantage just after the break.

However, three strikes in just five minutes from the Gunners put the hosts in front as Alexis Sanchez, Granit Xhaka and Mesut Ozil all found the target.

The visitors did ensure they’d claim a point, however, when Roberto Firmino converted from Coutinho’s pass, though neither side could muster a winner.

Afterwards, Klopp explained why he was pleased with all but five minutes of his team’s display during the encounter.

He told his post-match press conference: “The second half was not worse [than the first], we scored the second one – a wonderful, individual goal.

“On the whole, we had more chances, so yes, of course it feels not too cool. We had five minutes where we very often had obvious problems and individual problems – all the goals. It’s not in this case [about] the team defending.

“The first goal is why you should avoid crosses and of course when the ball is in the box it is at least 50-50, [but it was a] misjudgement obviously. [There was] misjudgement around the second goal. Third one, misjudgement – too deep, no offside, we let them go in the box and make it too easy.

“Then, after these five minutes, we reacted then much better and deserved in the end the point. It’s the minimum that we deserved tonight. The result is not what we wanted, but the performance for 89 minutes was what we wanted. We played 94 minutes [with added time] and the five minutes were very decisive tonight and difficult to explain, but good to learn from because we need to react differently.

“As individual players, we need to react differently in situations like this – you need to be much angrier than sad or disappointed. So we gave them [a chance], we opened the door for them in these five minutes and they, with all respect, took the chances. And then in this strange game, everybody probably thought first, ‘this is Liverpool’s night’ and then after these five minutes everybody thought ‘now it’s Arsenal’s night’.

“Then we struck back and it’s a point; usually if you go to Arsenal and get a point it is absolutely OK, we are not crazy that we cannot see that, but tonight it is different.”

Following the game, James Milner suggested Liverpool needed to learn to ‘be more boring’ in order to see out games in which the opposition threatens to take away an advantage during a spell of pressure.

The suggestion was put to Klopp, who replied: “He’s right, he is 100 per cent right – controlling a game is what he means, but it was not the situation, it was not that we gave the game away.

“Pretty much everyone was in and around the box [for the first goal]. We are professional football players so everyone saw it, if Joe Gomez makes a step in this direction and shoots the ball to Tottenham and let them play with it, there would not be a situation. It was a non-situation. But because we didn’t react well, they had a goal. It was nothing about controlling the game – you cannot avoid all crosses over 95 or 96 minutes.

“The second goal, if Xhaka shot a few more times like this in his life, Simon Mignolet saves these balls 99.9 per cent of all situations, but not tonight. We have to take that how it is. It is not about control; yes, we need to control games but I thought we did control the game. Then we opened the door for them and Arsenal is a real threat then. They have this quality, Mesut Ozil enjoyed the game for a few minutes.

“It’s difficult then and that’s why you have to avoid these situations – and five minutes can be enough to learn from the game, but in this five minutes they scored three times so that then makes it even more difficult. They could have scored once and we are still in the lead and everything is fine.

“We should have scored [more] and we all know that – we don’t have to talk too much about defence because it was not about the defence. Individually it is possible [to make mistakes], but usually not in one night. But we should have scored another four and that’s a big compliment to our team because coming here, playing this kind of football, creating these kinds of chances is not easy, but we did it.

“That’s why everyone in this room thinks if there would have been a winner tonight, it should have been Liverpool. Now we have a point, [so] OK, that’s it.”