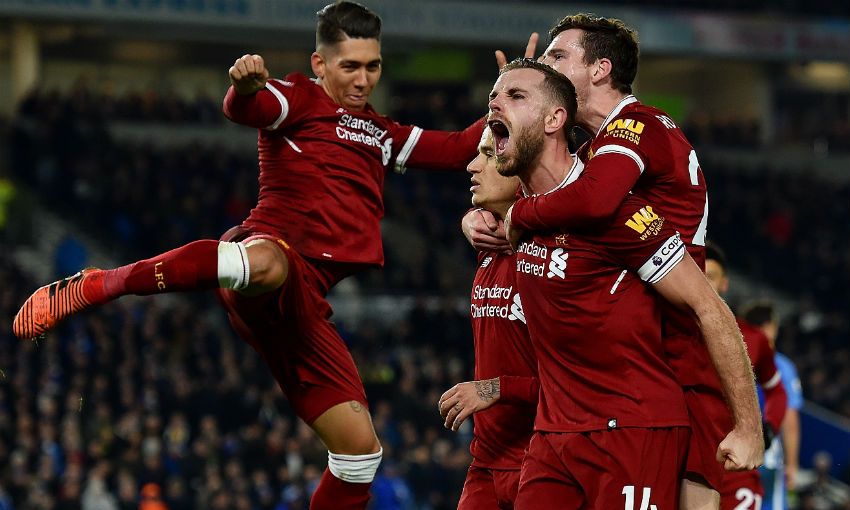 Klopp on Brighton win, rotation and the secret to Phil's free-kick

The Reds followed up their impressive 3-0 victory over Stoke City last Wednesday with a comprehensive 5-1 win at Brighton and Hove Albion on Saturday.

Klopp made six changes to his starting line-up at the Amex Stadium, having elected for the same number of alterations to his team in the Potteries three days earlier and five for last weekend’s 1-1 draw with Chelsea.

Liverpool head into Wednesday’s crucial Champions League clash with Spartak needing a point to ensure qualification for the last 16 and Henderson - who was restored to the XI against Brighton after being rested at Stoke - feels the boss’ approach is enabling his side to perform with the requisite intensity in each game.

“Of course you’re going to be disappointed when you don’t play but you’ve got to make sure you’re ready to come on or play the next game and it’s been working well for us so far so we need to keep it going.”

On Wednesday’s home meeting with Spartak, Henderson continued: “It’s another big game for us mid-week, but we’ve just got to keep playing the way we have been the last few weeks, keep the momentum going and if we do that then it’ll be a good night for us at Anfield.”

The Reds were at their ruthless best in Saturday’s comfortable win on the south coast, with both of Roberto Firmino’s goals - which put the visitors two and 3-0 up respectively - showcasing their breathtaking efficiency on the break.

“Overall for 90 minutes we played very well, controlled the game with the ball, scored some brilliant goals and defensively I thought we were solid.

“It was a brilliant second goal on the counter-attack. The front three, Salah, Firmino and Coutinho - fantastic goals today. So overall we’ve got to keep that going as a team. [It's a] big game mid-week and we need to keep the momentum going.”