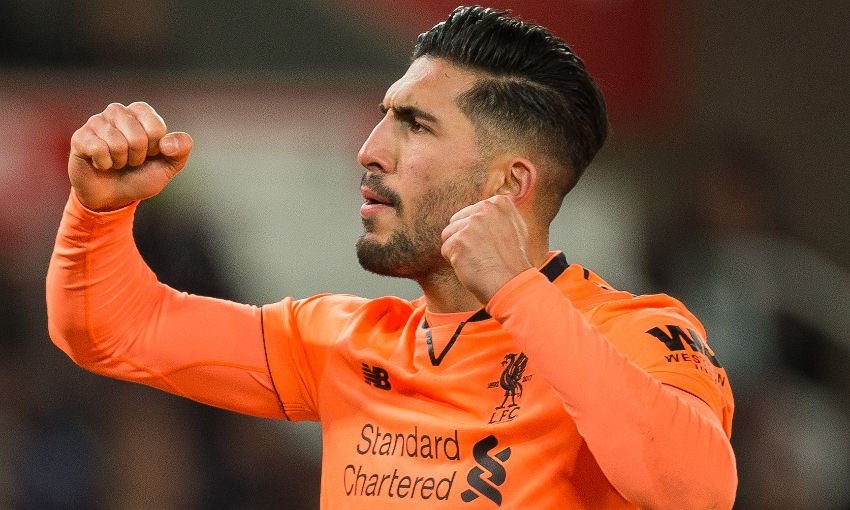 Brighton 1-5 Liverpool - as it happened

Emre Can believes Liverpool have the attacking firepower to break down any opponent they face after they reached a half century of goals for 2017-18 in midweek.

The Reds’ 3-0 victory over Stoke City on Wednesday evening took their total strikes in all competitions to 50 - a feat achieved in just 22 games.

Now, as Jürgen Klopp’s side prepare to take on Brighton and Hove Albion - a team who have conceded only 14 goals in as many Premier League matches so far this term - at the Amex Stadium later today, Can has explained why he and his teammates take to the field confident of breaking down any opposition.

“I think everyone knows we have very good players in offense,” the midfielder told Liverpoolfc.com at Melwood. “We have to believe and keep going like we have in the last few weeks and then we will try to score and try to win the game.

“I think we can score against every team in the world because of our offensive players. It is unbelievable how strong they are. You can see it always here at Melwood on the training pitch and everybody is happy to play with them.

“Of course, it’s not all about attacking - it’s about doing the defensive work as well, but if you have quick players like Mo and Sadio, and skilful players like Roberto, for the midfield players it is easier to play.”

Liverpool’s clash with Brighton is the first game of eight in the traditionally hectic month of December.

The Reds arrive into the period on the back of a seven-match unbeaten run and Can feels they’re primed to extend that sequence.

“To begin December with a win would be very important,” he continued. “I think at the moment it’s very tight there in the top six and I think we did well in the last few weeks and we played great football, but against Brighton it will be a very tough game and very difficult because they are doing very well in the Premier League.

“As a promoted team they are a proper team; they all fight for each other and it will be difficult for us.

“But it’s a very important period now and you can see in this period where it goes - you can go to the top or a little bit down to the bottom. You can see that because you have so many games – and, of course, our target is to go up.

“I’m enjoying the schedule, it’s great. I always prefer to have games then training. It’s always nice to play matches of course although sometimes cold but of course that is no problem when you are running!”

Can added: “Confidence is high at the moment but, of course, it is coming from working and coming from trying to win the games and just that we can do it. We have to believe in ourselves to gain confidence and we have to win games because it’s a very important period at this time.

“We don’t have to look up or think about other teams. We have to look from game to game and try to win the games.”

Despite his bullishness about Liverpool’s offensive strengths, Can knows Brighton will not make life easy for him and his teammates.

The Seagulls currently sit in 10th position in the Premier League after a solid start to life in the top flight following promotion from the Championship.

“They did quite well so far and like I said before, Brighton are a proper team,” Can stated. “They all together they play as a team I think and that makes a difference for them. Of course, we want to play our game and the next game we want to play our style and our aim is to win the game.

“To be a team is the most important for them and I think nobody shows to himself. They always want to give everything for the team and they play for each other. That’s what Brighton are doing.”

Following the win at Stoke on Wednesday, Liverpool occupy fifth position in the standings and are just six points behind second-placed Manchester United.

Given the compact nature of the table, Can acknowledges there’s little room for error if the Reds are to maintain their push at the top end of the Premier League.

He explained: “Every game is very important and every point is important. You can see just how tight it is at the top and you can see every week something can happen.

“For example, three weeks ago Tottenham were the flying team in the Premier League and now they are behind us. It’s very important you don’t have a bad period and we will try our best to win the games.”

Jürgen Klopp: Brighton have woken us up