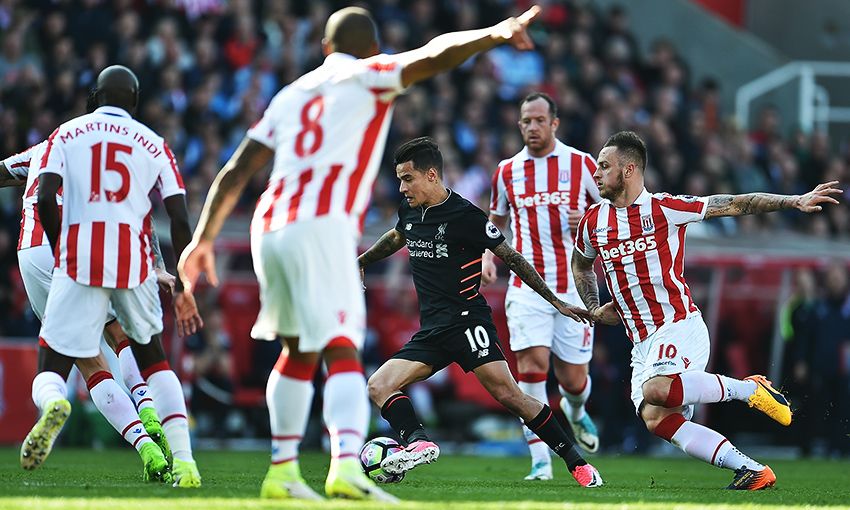 Liverpool's Philippe Coutinho could match a goalscoring record set by Steven Gerrard if he finds the net in Wednesday night's Premier League match against Stoke City at the Bet365 Stadium.

To find out what milestone the Brazilian and former captain could share, plus eight other key pre-match facts from club statistician Ged Rea, read on...

Coutinho has scored in each of Liverpool's last two trips to the Potteries. Should the No.10 repeat the feat tonight he will become only the second Reds player, after Gerrard, to score in three successive league visits to Stoke.

Last season, Coutinho and Roberto Firmino both came off the bench to score in three second half minutes to win the game 2-1 for Liverpool. It was only the ninth time in Reds history two substitutes had found the net for the club in the same league game.

Liverpool substitutes have scored 11 goals against Stoke down the years - the joint most against any team, along with Fulham.

The Reds have won three of their last four league matches at the Bet365 Stadium. Victory today would see the club notch three successive league victories at Stoke for the first time in their history.

Liverpool have found the net 13 times in the last 12 league visits to Stoke, with five of them coming in one game - a 5-3 victory in January 2014.

James Milner, Nathaniel Clyne, Roberto Firmino, Joe Gomez and Christian Benteke all made their Reds debut in this fixture on the opening day of the 2015-16 season.

Emre Can could make his 100th Premier League appearance for Liverpool.

Simon Mignolet saved a penalty against Stoke on his debut at Anfield in August 2013. The spot kick was awarded by tonight's referee Martin Atkinson.

The Reds' biggest away league victory at Stoke came in March 1982, when they won 5-1 with Terry McDermott, Kenny Dalglish, Graeme Souness, Sammy Lee and Ronnie Whelan all scoring.