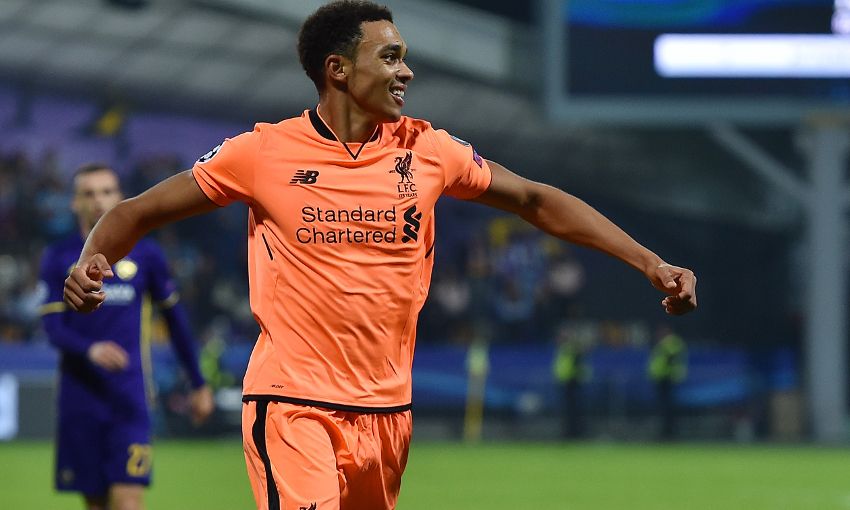 Trent Alexander-Arnold insisted it was only a matter of time before Liverpool got back among the goals after an outstanding display yielded a 7-0 victory over Maribor in the Champions League.

The Reds recorded their biggest ever European away win in Slovenia on Tuesday night to bring an end a run of three consecutive draws in some style.

Mohamed Salah and Roberto Firmino both netted twice, while Philippe Coutinho, Alex Oxlade-Chamberlain and Alexander-Arnold were also on target.

And the No.66 believes Jürgen Klopp's side got their just rewards for a record-breaking performance that he sees as an ideal platform to build on in the coming weeks.

"It was a really, really good win," Alexander-Arnold told Liverpoolfc.com.

"We came here with a game plan and we executed it perfectly. I think we sent out a statement to the other teams in the group.

"Prior to the game we watched their strengths and also their weaknesses and how we could exploit them, and we tried to stop them playing the way they like to play.

"The whole team knew we had the goals in us. It was just a matter of when and where, and it happened [here] and I think that might be the catalyst to get the ball rolling in the games we have going forward."

There was some confusion as to whether Salah or Firmino got the final touch for Liverpool's fourth goal of the evening, with both players beating Maribor's defenders to Alberto Moreno's low cross.

The strike was officially credited to Salah, but Alexander-Arnold was pleased to see two teammates in position to score regardless.

"You need those hungry players who just want to score and to have them in abundance in our squad is really good," he said.

"Even though we did kind of put the game to bed really early on, they still had a couple of chances and it was never over until it was over, to be honest.

"We went full throttle right to the very end and we got the goals that we needed."

"That's as important as the goals. If it had been 7-1, it wouldn't have been a nice result, so everyone did their job," the teenager added.

Trent on Maribor, goals and Spurs

Thoughts now turn to Sunday's trip to Wembley, where Liverpool will face Tottenham Hotspur in the Premier League, and Alexander-Arnold says confidence will be high in the Reds camp going into that match.

"Momentum is a really big thing in football. Once you get the ball rolling with the goals and the performances, it's really hard to stop," the Academy graduate noted.

"We might have been disappointed with the result on Saturday but we bounced back [against Maribor] and we showed our talent and we will try to show that again on Sunday."