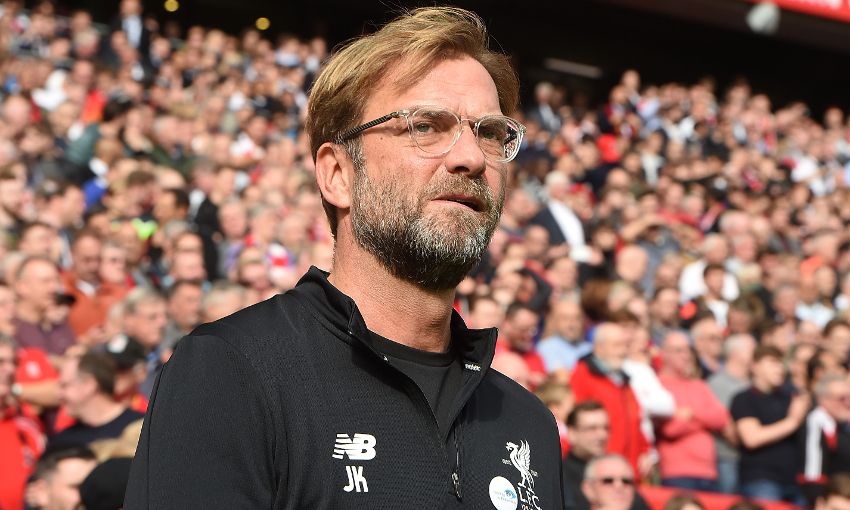 Report: Reds held to goalless draw by United at Anfield

Jürgen Klopp saw plenty of positives in Liverpool's performance as his side were held to a goalless draw by Manchester United at Anfield.

The Reds were on the front foot for much of the game but could find no way through the stubborn rearguard of their arch-rivals.

Joel Matip perhaps went closest to claiming victory on the afternoon with a close-range effort that was superbly saved by David de Gea.

Read on for a summary of Klopp’s post-match press conference...

On whether Liverpool tried to make the running more than United…

I didn’t think that so I didn’t say it. I said it was obvious they had a more defensive approach, I think that was obvious but that’s completely fine. After the game, it looked to me like they wanted a point; if they could get three, they would take it of course, but we wanted three. So they are happy and we are not happy. That’s easy. You cannot defend us when you, I’m not sure if it’s a saying… if you have no running in the game. I saw them run a lot actually, only that we were dominant. But it’s a home game so we should be dominant. I’m OK with the performance. It’s not my job to judge the Manchester United performance.

On whether his team created enough chances to win…

Maybe we didn’t create enough chances, but the problem is that everything you ask is always underlined with negativity. That’s how it is because of our situation. If we would have won the last five games, today we created enough chances to win the game and we should have been given a penalty, maybe a red card and all that stuff. But now, again, we didn’t. You can write whatever you want but we have to stay positive, and for me it’s easy because the performance gives me enough reasons to stay positive, absolutely.

The boys performed again and learned a lot from the last game, protected our offensive situation perfectly against one of the best counter-attacking teams in the world. If you don’t protect Mkhitaryan, he runs from here back to Manchester with the ball. And Lukaku is usually not to defend – we defended him well. Martial, Rashford, Young, whoever was on, we really did well. That was all good. Was it perfect? Probably not otherwise we would have won. But we had the big chance plus a penalty [claim]… it’s 2-0. Which result do you want against Manchester United? There are not a lot of games when they sleep for 90 minutes and you can do whatever you want. They defended with nine players in and around the box, that’s completely OK. I don’t judge this. It’s just that it makes our job a little bit more difficult.

But we still came through, we still played football, we had shots, we had crosses – crosses to the first post when nobody was at the first post, and crosses to the second post when nobody was at the second post. That’s true but that’s how life is in football. You cannot buy easy goals, you have to work for it. And I’m really happy that the boys were again ready for it, you cannot take that for granted; that they are ready, yes, but that they are still confident or again confident, no. Because usually confidence grows when the things work like this [snaps fingers]. I told them after the game that we decided already to take the hard way when we joined Liverpool. Obviously we cannot win something in a holiday mood, we are not in a holiday mood. We are really working hard, the boys, I really like how they handle the situation.

Could we do better? Yes. Is it really likely that you do a lot better in this game? I don’t think so. My job is to ask for what I can get and not to ask to play like Barcelona after three 6-0 wins in the last three games. Play as good as we can: they did and we will carry on. As it looks in the moment, no injuries, not even little ones, as far as I know. It’s good. We can go again on Tuesday and go again on Sunday, and go again a week later. It’s good. It’s only not good if you look at the table and think we cannot be this or that anymore. For me, a team who can become champions this year was at our stadium and it’s not a world apart from us. It’s not that we play on different planets, it’s not that they are really good and we don’t find the entrance of the stadium. It’s OK and we will carry on.

On suggestions the Reds should have attempted to be ‘more offensive’…

If you watch the game and you have an idea of football, you cannot expect that we create 20 chances against Manchester United – it’s just simply not possible. Barcelona on the best day would not do it. You will see, United will not lose a lot of games in this season, so what people think about us when they think we should have done more offensively, it takes too long to explain football to start at that point again. I cannot think about this – it’s all OK with expectations, I can easily deal with that and it’s not a problem. We have the biggest expectations. The season is not over and the main thing you have to do during a season is to develop and to perform, and that’s what we do.

So far, we didn’t get enough for it – I think that’s obvious. You can blame us and say it’s because we don’t use the chances – and who is responsible for this? We are responsible for this, but you can only create chances to score and that’s what we did again. I think everybody who has watched our games saw in each game we could have won, even against Manchester City, which sounds crazy but it is like this. So I am happy about the consistency of performing. We have to develop again but from the last game to the game today, we improved a lot in protecting our own offensive situations.

In Newcastle they had not a lot of counter-attacks, but they had more counter-attacks than United today because we did better in these situations. We took their key players and counter-attacks out of the game and were still brave enough to create. If we are silly, we create without protection and then maybe we could have one or two chances more, but it’s already 4-0 United before we are awake. That’s life. If you want to be happy today you can be happy, but if you think, ‘OK, again not too bad…’ – which is probably my view on it – then you can be in this mood and carry on. Now we go to Maribor, then Tottenham and then [play] Huddersfield.