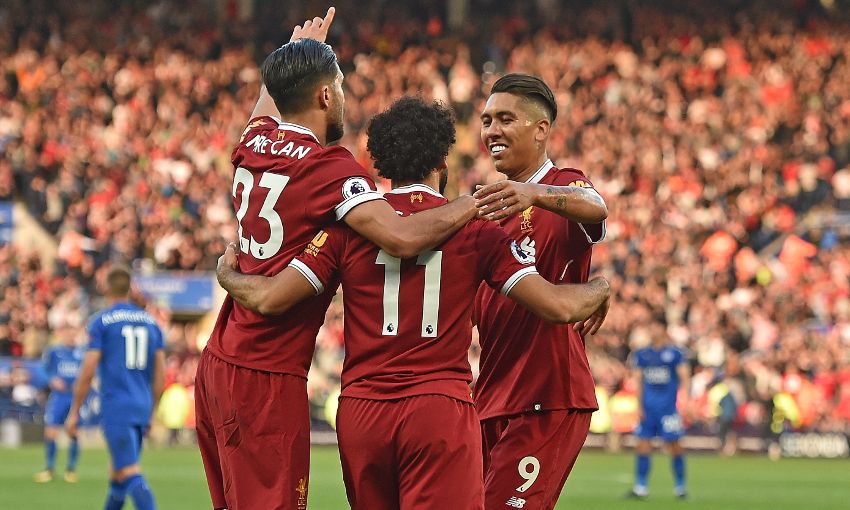 Photos: Five goals and a penalty save as Liverpool win

Liverpool returned to winning ways with a 3-2 victory over Leicester City in a pulsating Premier League contest on Saturday evening.

Philippe Coutinho crossed for Mohamed Salah to head home in agile fashion for the opening goal, and then curled a stunning free-kick into the corner to give the Reds a healthy cushion at King Power Stadium.

Shinji Okazaki halved the hosts’ arrears deep into added time at the end of the first half but Jordan Henderson restored the advantage midway through the second period.

Jamie Vardy responded within a minute but the Leicester striker then saw a penalty beaten out by Simon Mignolet – and Jürgen Klopp’s team held on for a first win this month.

With Dejan Lovren and Joel Matip passed fit to play after injury concerns in the week, Klopp made seven changes to his starting XI from the Carabao Cup tie on Tuesday.

Only Coutinho, Joe Gomez, Henderson and Georginio Wijnaldum kept their places, while Mignolet returned to goalkeeping duties in the Premier League.

Vardy recovered from a groin injury to feature for the Foxes and the England international served a reminder of his threat, if it were needed, within five minutes.

Okazaki sprung the Leicester No.9 into space down the left flank and he moved into a shooting position, albeit from a narrow angle, before drawing a firm stop from Mignolet with a side-footer. Riyad Mahrez clipped the rebound over.

The Reds went much closer without scoring on 12 minutes.

Having moved possession from left to right in turns to Emre Can, the midfielder drilled a fine low effort on the diagonal against the base of the post – and Salah somehow tapped the loose ball wide.

The Egypt international had amends to make and he did so at the first opportunity.

Coutinho was afforded time and space on the left corner of the box to pick out his teammate at the other side and Salah adeptly met the cross on the stretch with a clever headed finish inside the near post that Kasper Schmeichel could not keep out.

Buoyed by the breakthrough, Liverpool seized the chance to take greater advantage of their dominance and there was a sense of inevitability when Alberto Moreno won a free-kick 25 yards from goal and Coutinho lined up a strike.

The Brazilian’s vicious curler did take a deflection off the wall en route but was destined to smack the back of the net to Schmeichel’s right in any case. 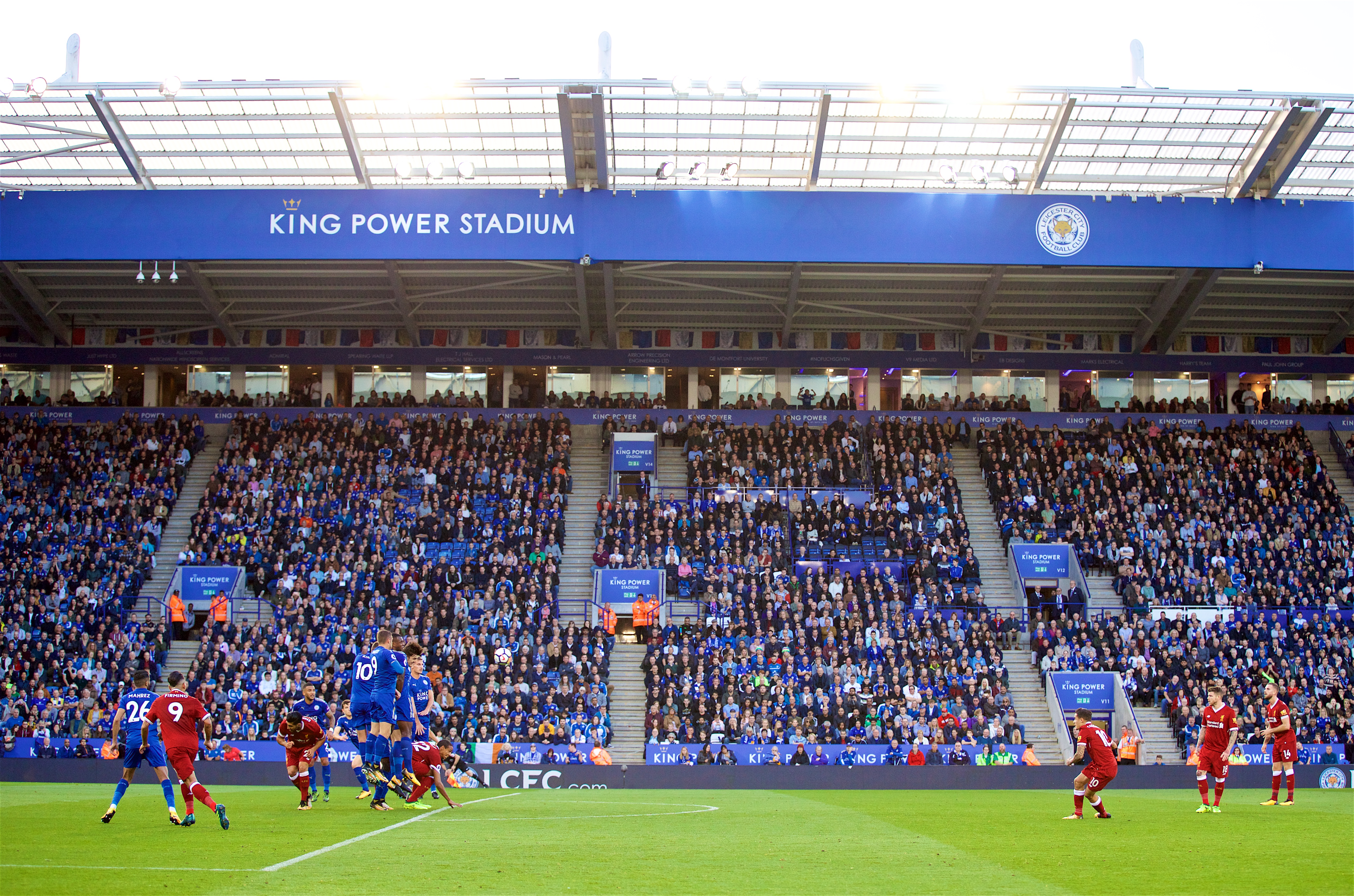 Leicester rallied in the remainder of the half, though Roberto Firmino was inches away from recording a third with a rasping effort across the face of goal from Can’s reverse pass.

But it was the Foxes who notched before the interval.

Matip conceded a free-kick in Reds territory that Mahrez whipped in for Vardy to glance at goal, Mignolet clawing away the header, and from the resulting corner a scramble concluded with Gomez pushing the ball towards his own net under pressure and Okazaki forcing home.

Coutinho had an early sight of goal when the sides resumed battle, his effort at the back post too close to Schmeichel to cause concern, though there was more balance to the exchanges on the whole.

As the home side tested Liverpool’s defensive resolve in search of the equaliser, Klopp’s men sought to spring on the counter through Coutinho’s intelligent use of the ball and Salah’s sheer speed.

Lovren was aggrieved to not be awarded a penalty after being held in the box by Harry Maguire, before the manager sent on Daniel Sturridge for Firmino to freshen up the attack.

And the decision paid dividends within five minutes.

The No.15 led a three-on-one counter-attack and used Salah as a decoy to eventually square to Henderson, who stepped inside Maguire’s challenge and converted coolly. 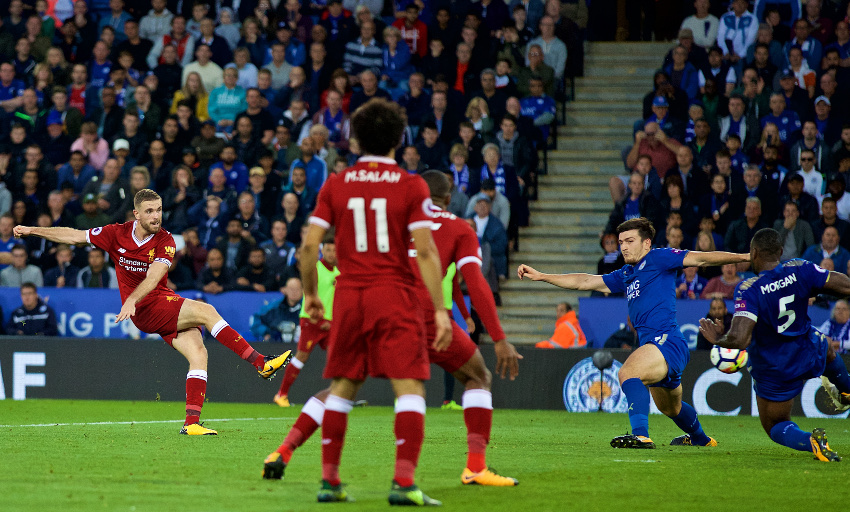 The captain’s goal was the beginning of a frenzied spell which included an instantaneous response from Vardy to make it 3-2, the Foxes forward heading in on the rebound after Mignolet stopped Demarai Gray’s angled hit.

Vardy then broke free in behind once more and was felled in the area by the Liverpool goalkeeper at the cost of a spot-kick – only for the Belgian to crucially punch away the attempt.

Order was ultimately restored as time elapsed and Sturridge clipped shots over the crossbar and at Schmeichel, but three was just about enough for the Reds to taste victory again.