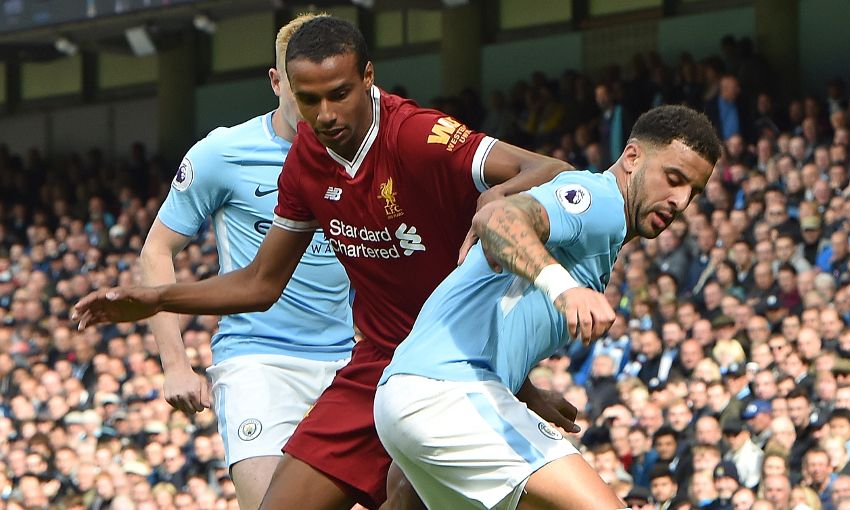 10-man Liverpool suffered a first Premier League loss of the season as they went down 5-0 at Manchester City on Saturday lunchtime.

The Reds began the contest brightly at Etihad Stadium, but Sadio Mane’s sending-off for a high foot on goalkeeper Ederson just after the half-hour dealt their plans a decisive blow.

Sergio Aguero had earlier put City in the lead, while Gabriel Jesus grabbed a goal either side of half-time to add emphasis to their advantage.

Substitute Leroy Sane then added a further two as the contest edged towards its conclusion on a day to firmly forget for Jürgen Klopp’s side.

Klopp made three changes for the contest from the line-up deployed last time out, with Mignolet, Ragnar Klavan and Trent Alexander-Arnold coming in for Loris Karius, Dejan Lovren and Joe Gomez. New signing Oxlade-Chamberlain was named on the bench.

As the heavy rain made way for sunshine at the Etihad, the contest got off to a lively opening between two of the most attack-minded teams in the Premier League.

Both sides threatened in the early exchanges, with the hosts required to defend a series of testing set plays from the visitors, while Kevin De Bruyne’s run and low shot brought a save out of Mignolet.

The Liverpool goalkeeper was called into action again shortly after, this time turning Fernandinho’s skimming strike around the post.

At the other end, Roberto Firmino couldn’t connect properly with a brilliant centre from Jordan Henderson, while Emre Can’s long-ranger was padded down by Ederson.

Next, Mohamed Salah’s burst of speed saw him completely leave Nicolas Otamendi for dust on the right; however, his attempt to deceive and net at the near post was read by City’s stopper. 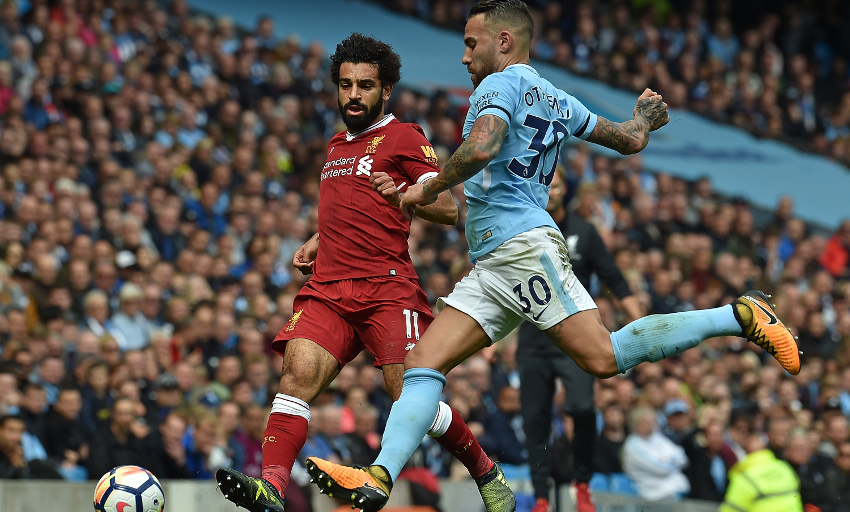 A goal at either end appeared inevitable – and it duly arrived in the 24th minute, though it was Pep Guardiola’s men who were to profit.

De Bruyne slid a pass between Joel Matip and Klavan for Aguero to run onto, and he made no mistake in rounding Mignolet and slotting into the empty net.

Liverpool’s attempt to muster an instant riposte saw Can strike a free-kick from inside the ‘D’ the wrong side of the upright.

Nevertheless, Klopp’s side should have restored parity on the half-hour when they sprung forward at pace once more and Mane slid Salah through on goal after a brilliant turn in the centre of the park. But the No.11’s attempt to steer around Ederson was too close to the ‘keeper, who was able to save.

The Reds were then on the receiving end of their own good fortune when Klavan conceded possession to Jesus near his own area. Mignolet denied the Brazilian’s eventual effort and, indeed, John Stones’ clear strike at goal from the resulting corner.

Seven minutes before the break, Liverpool’s hopes of taking something from the game were dealt a huge blow as they were reduced to 10 men. Mane’s challenge when attempting to beat Ederson to a ball over the top was deemed dangerous by referee Jonathan Moss, who issued a red card. After lengthy treatment, the Blues replaced their goalkeeper with Claudio Bravo.

And further disappointment was to be heaped upon the visitors before the break when Jesus headed in a close-range second for City.

Klopp elected to bring on Oxlade-Chamberlain for his club debut at the interval, replacing Salah.

But any faint hopes of staging a comeback were dashed when Jesus hooked in a third goal for the hosts after Fernandinho put Aguero through on goal and he elected to square for his fellow frontman to net.

With a Champions League game in midweek to come, Liverpool introduced James Milner and Dominic Solanke to the action to replace the tiring legs of Georginio Wijnaldum and Firmino, with the pattern of play now having taken on an entirely different complexion to the first third.

And their disappointment was compounded by Sane adding a fourth and fifth towards the end for the home team.