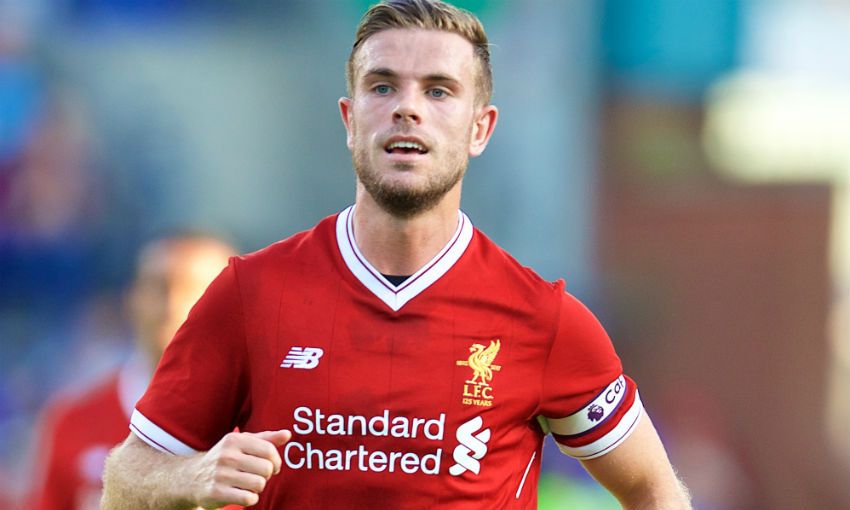 Jordan Henderson has set himself a target of being fitter than ever before by the time the new season begins.

After spending the final three-and-a-half months of last term out of action due to a foot injury, the Liverpool captain has featured in all four of the Reds’ friendlies during their ongoing pre-season programme.

A 45-minute run-out in Saturday’s Premier League Asia Trophy final victory over Leicester City represents the latest step in Henderson’s quest to regain full sharpness, and the skipper is determined to be in peak condition come the first game of 2017-18, which sees the Reds visit Watford on August 12.

“I feel as though I’m getting stronger every game. It’s good to be back, I’ll keep working hard and keep on going then hopefully at the end of pre-season I’ll be as fit as I’ve ever been,” the midfielder told Liverpoolfc.com.

“I can’t remember the last time I had a full pre-season so hopefully this one I can stay injury free, complete pre-season and hopefully be feeling good. Hopefully that will stand us in good stead going into the new season.”

To miss the closing stages of a season in which Liverpool claimed a fourth-place finish in the Premier League was a source of huge frustration for Henderson.

But he’s now relishing being back among his teammates both on the pitch and in training as Jürgen Klopp’s squad gear up for the new campaign.

“Being in and around the lads all of the time, putting the kit on and playing in front of a crowd - just the feeling you get before a game and the excitement, I’ve missed all of it,” he said.

“It’s been brilliant being back [during] the last couple of weeks and hopefully I can just continue doing that.”

Henderson also revealed that he learned plenty about his body during his rehabilitation process, before expressing his gratitude for Klopp’s unwavering support throughout his spell on the sidelines.

“As a player, you want to be back as quickly as possible and you might go through a bit of pain and a bit of discomfort just to get back out there, but sometimes that isn’t ideal and it could make it worse,” the England international explained.

“That’s another thing I’ve learned probably over the last few months: Sometimes you’ve got to listen to your body and not push yourself too much if there’s some pain.”

The No.14 continued: “I think the manager plays a big part for all of us. Speaking to him makes you feel a lot better, a lot more confident, whether you are playing or you are not playing or whether you’re injured.

“He’s very good to talk to, he’s got a lot a lot of experience and he knows what he’s doing so you definitely listen to him and take advice from him and try to implement that - whether that’s on the pitch or off the pitch.

“Since the manager has come in, for me personally he has had a big impact on the way I play and the way I think on the field, and also off the field.

“With the captaincy I think he has helped me massively. It’s not just me and he’s the same with everybody else, he’s had a big influence on the whole team really. You can see everybody going on developing and getting better so hopefully that can continue and we can all become better players.”