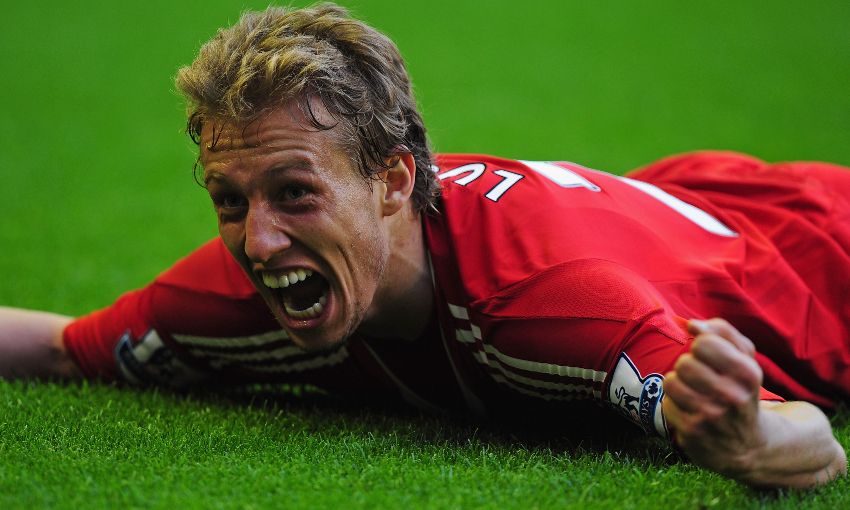 John Aldridge has paid tribute to departing midfielder Lucas Leiva, insisting the Brazilian's legacy will live on at Anfield.

The 30-year-old brought a decade of highs and lows on Merseyside to an end on Tuesday, completing a switch to Serie A side SS Lazio.

Aldridge, who grew close to Lucas during his time at the club, believes his presence will be missed around Melwood.

“In recent times we have seen Steven Gerrard and Jamie Carragher - players who epitomise the club - leave," Aldridge told Liverpoolfc.com. "Lucas is the third one for me.

“He has been with us for such a long time. I remember when he first arrived and he struggled a bit and he got an awful lot of stick from various parts of the media, but he rolled his sleeves up and proved people wrong.

“Lucas became a very valuable member of the squad, and I’m not just talking about on the pitch, but off it as well - in the dressing room.

“I got to know him over the last couple of years and I have to say he is a lovely fella. He has a lovely wife, they both have great personalities and they are a great family.​"

Aldridge also revealed his admiration for Lucas' passion, not only for the club and the fans, but the city of Liverpool.

He added: “What you see is what you always got from him - 100 per cent in every single game. He ran through a brick wall for this club and the supporters.

“He absolutely loves Liverpool. He loves the fans, but he is not the type of person to just sit on the bench and take the money, he wants to play and we wish him all the best with Lazio.

​In 2015-16, Lucas' dedication was acknowledged by the LFC Former Players Association, who crowned him Player of the Year.

“He was superb and he thoroughly deserved that award,” Aldridge continued.

“He didn’t just play central midfield [that season], he was asked to play as a centre-half and he was superb.

"He was our best player when he played there at Wembley in the League Cup final against Manchester City.

“He’s a leader on the pitch and he wasn’t scared to voice his opinions, which he learned from Stevie and Carra as well.

"Lucas is a great lad and we all wish him all the best for the future and hope to see him back at Anfield again in the future.”

'Shaqiri hasn't dropped below eight out of 10'

'Firmino is vital to Liverpool's balance'