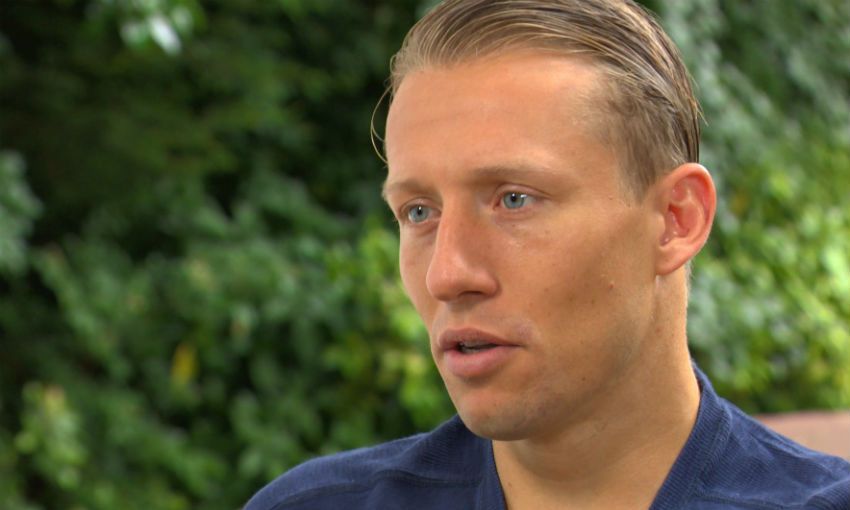 Before flying out to Rome to finalise his transfer to SS Lazio on Tuesday, Lucas Leiva sat down for a final farewell interview with Liverpoolfc.com.

The Brazilian, who made 346 appearances during his decade with the Reds, discussed a wide range of topics, including the fondness he has for the club, the city and its people, his favourite memories from the last 10 years and his reasons for taking on a new challenge in Serie A.

LFCTV GO subscribers can watch the interview in full below - click here for details if you need to sign up - or, alternatively, you can read on for a full transcript.

It has been a difficult few days for me when I’ve had to say goodbye to a lot of people that I spent time together for many years and became closer and closer, but I feel that’s probably the right decision for both sides. Just doing this interview means how much the way I’m leaving and the way I’d like to leave the club one day, because that happens with every player because players come and go. It just shows how much I’m appreciated by everyone so that’s why I think it’s a good time to try a new thing, a new challenge for me, and for the club as well. I think I leave and look behind and see the club is in a good moment and hopefully the next few years will be winning things as well.

The last couple of days must have been hard. What has been going through your mind?

Like I said, a lot of things have gone through my mind. I have spent a lot of time here and I got closer to people and I have a lot of friends, so to be honest at this moment it’s still mixed emotions, but like I said I have to be positive like I’ve always been and try to think that these kind of things happen. It would have probably happened in one year’s time when my contract would finish, expire, so I think it’s a good chance for me to move to a good city and a good club. They did really well last year as well so we will be able to play European games there, so it’s all positive. Of course there is the negative side, I would say, because I have to leave, but I’m really proud of this journey and I’ll just be like another supporter. I’ll always be watching and supporting Liverpool and for sure I’ll be back, in the city to visit friends and watch games in the future.

You’ve settled in really well over the past 10 years and of course that applies to your family as well. You’ve got young children who have grown up in this city, how is this going to affect them?

I think it will affect like it’s affecting everyone, myself and my wife. Of course they [the children] are very young so I don’t think they understand so much, yet. Probably Pedro understands a bit more, but like I said it’s something and a decision I had to make and I think it’s good for both myself and the club. Pedro and the kids will adapt. They are good kids and they will make new friends and for sure we will keep the link with Liverpool and they will be back here as well with myself to visit their friends, but they won’t be able to live here for a while, but you never know in the future. But for now it’s time to move.

Little Pedro is a Liverpool fan, he loves going to Anfield so it’s a little bit sad that he won’t be able to do that now at least for a short while…

He loves to go to the Academy and Soccer Schools and go to Anfield to watch the games. It will be hard for everyone like it is for me as well, but together with the club and my family we decided to try a new thing now. He will be OK, I’m sure of that.

Ten years ago you were on a flight from Brazil at the age of 20. 6,500 miles later you arrived here in this far foreign land. What did you make of Liverpool?

A beautiful city when I first came. But I didn’t know much about the people, about the city, but of course I knew a lot of things about the club. Then slowly I started to understand how Liverpool people are and how this city is, and I just love it, every minute! Like I said before, it has been a good 10 years with a lot of ups and downs but that’s how I think life is. The feeling is I have enjoyed it as much as I could and in the future for sure I’ll be back and I’ll be around. I still feel that I will always be a part of this city and part of the club. I’m going for a time - I don’t know how long, but for sure when I come back to visit friends and go to Anfield I’ll be another one of them.

You say the 10 years have been like a rollercoaster and there were tough times to begin with, so what kept you going through those struggles?

I think it’s my desire to not give up and keep going and try again and believe what I was doing was right. I think that is what made me keep going and of course to have the opportunity to play for Liverpool for me was a unique chance, so I just tried every day to fight and prove to myself I was able to do it, so that’s the reason I think.

The fans are a big part of the club, probably the most important part of the club, and without them Liverpool wouldn’t be the same club I would say. My relationship just grew up slowly and today I can see the respect that I have from them, so it’s really nice. Thank you for all the support, especially in difficult times, that’s when it means a lot. We all know that Liverpool fans are really special and they were always here for me.

You spoke about the fans there and you also mentioned the city, what have you made of Liverpool people?

Liverpool as a club and Liverpool as a city is a unique place. I think it’s different from everywhere. Liverpool people are different to English people, I would say, so that’s why it makes Liverpool a special place. I think I settled really well and I have this kind of character, similar, so Liverpool people are very humble, they like to help and they have the same sense of humour so it’s good. Of course they want more and more like everyone else, but it’s really the connection we had which was amazing.

You mastered the local language and you seem to be a Scouser of sorts?

Yes, I hope I don’t lose the accent now! For sure I won’t be using my English as often as I use it here but for sure this city means a lot. I learned English here so my accent will always be Scouse, I have no doubt about that!

What will you miss most about Liverpool?

I think I will miss the people. I’ll miss the club, of course, a fantastic club with a good environment to work. When you feel home sometimes you don’t know the reasons why you miss the place but you just miss it for some reasons. For little things, maybe I’ll miss going to Calderstones Park. Sometimes it’s just little things that make you appreciate, like when I came here I missed my weekends with my family. So just little things that when I’m there in Rome I’ll realise that thing I used to do in Liverpool, but I need to move forward and I need to adapt to a new country, a new city, a new club, and don’t look back because otherwise it will be really hard for me there as well so I want to help the same way I think I helped here. I think I have an important role to play there now so I have to be ready for the challenge as well.

You arrived here with Ariana, who was your girlfriend at the time but is now your wife. Ten years on, how much do you rely on her support and how good a team do you two make?

She’s been there for me all of the time since day one. She’s always there to listen to me, to give her opinion and stick by my side. She’s been really important, she still is important and it was a decision that we made together. She felt that I wasn’t happy with my career I would say, so I had to look for a place where maybe you never have guarantees but maybe I’ll have an important role to play and enjoy the next few years. She’s been brilliant for me of course.

If you could go back to one moment over the last 10 years here in Liverpool and live it again, what would it be?

I don’t have one but probably the games against Everton are the moments I will remember. When I say Everton, for sure my first game against them comes to my mind when I almost scored. The last derby as well comes into my mind when we won and I played. I played really well. The Champions League nights… there are so many that I could say but these games will always be in my mind. Like I said, there have been so many emotions and I wouldn’t be able to pick one moment you know.

How hard will it be for you to leave this city behind?

It will be hard. It’s like you are finishing something so it’s always not easy when you know it’s done and it’s finished. But the challenge and starting a new one, it gives me hope and happiness and it helps me to not be too much sad, too disappointed. I try to look forward, but of course like I said I feel as though I’m leaving my home behind. For sure it will be hard but I am looking forward to a new challenge as well. It’s a great chance for me and a great experience. I will have to learn again, try to adapt again and learn a new language, so it’s very positive and I like a new challenge so on one side it’s sad to leave here, it’s my home, but I’m looking forward to a new one.

When I say the word ‘Liverpool’, what springs to your mind?

My life, really. Of course when I came here I was 19/20 but what I am now - my family and everything happened here. When Liverpool comes into my mind it’s that my life is here until now, so that’s how I see Liverpool. Like I said, I’ll be back. I’m going but I’ll be back to visit and spend time in this city, I’m sure of that.