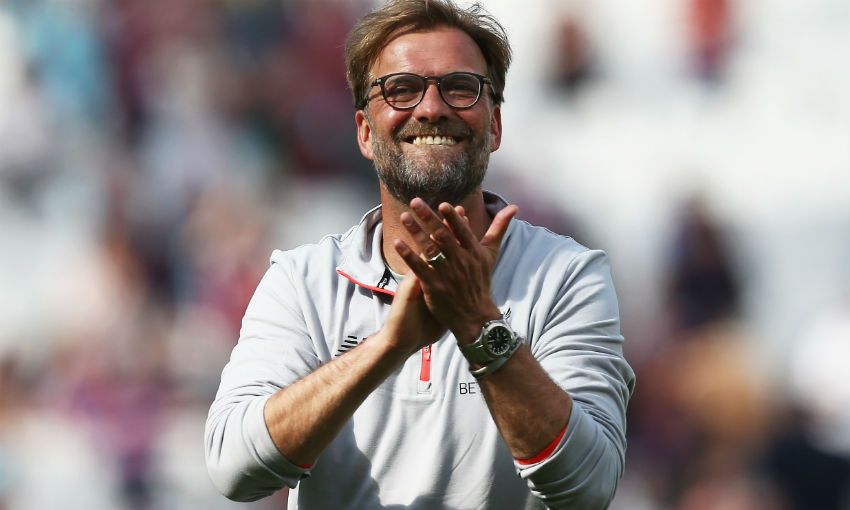 Being under pressure is part and parcel of representing Liverpool FC, according to Jürgen Klopp, but the boss still wants to see his team 'enjoy football' in the way they did against West Ham United.

Sunday’s comprehensive 4-0 victory over the Hammers means the Reds head into the final weekend of the season with their fate in their own hands in terms of Champions League qualification.

Klopp and his players welcome Middlesbrough to Anfield on Sunday knowing they must pick up all three points to guarantee a return to European club football’s premier competition.

However, the manager is keen to ensure his squad do not feel inhibited by the task of ending the campaign on a high.

“That’s our job to do [and] I really thought the boys did really well,” Klopp told Liverpoolfc.com after the game at the London Stadium.

“We spoke about it before and said ‘is there really pressure on us or is it only what people will make of it?’, because we always have pressure, we are used to it.

“We are professional football players or managers. If we always want to win games then we have always this pressure.

“There is still space to enjoy football and I saw a lot of joy. There was a lot of good football in, [what may have seemed] from outside a difficult situation, but we did really well and we helped ourselves with our best tools, with football.”

Liverpool led West Ham 1-0 at the break thanks to Daniel Sturridge’s expertly-taken goal, before a second-half flurry saw Philippe Coutinho net twice and Divock Origi round off the scoring.

And Klopp acknowledged the improvements his side made after the interval.

“Start, not good, end of first half, lucky, but we scored a wonderful goal and learnt extremely [well] from the first half,” he said.

“In the second half we changed a few things, went more direct, created much more difficult-to-defend situations for them, had shots and finishes from everywhere, pretty much.

“The start of the second half - that was real football. We decided the game, we controlled it, and now we’ve got the three points. Fantastic.

“Now we have to recover and then prepare to do our best against Middlesbrough again.”