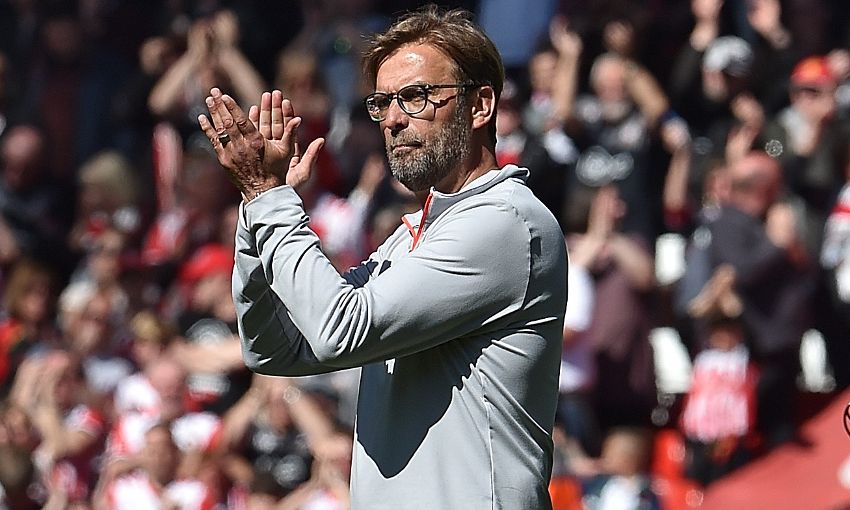 Jürgen Klopp acknowledged Liverpool’s disappointment at being held to a goalless draw by Southampton on Sunday, but insisted it won't discourage them in their chase of a top-four finish.

The Reds were left frustrated as they were forced to settle for a share of the spoils against a stubborn Saints rearguard at Anfield.

James Milner went closest to forcing the breakthrough, but he saw his second-half penalty saved by Fraser Forster to ensure the game finished level.

Nevertheless, Liverpool remain in third place in the Premier League table following the fixture and results elsewhere mean their hopes of qualifying for the Champions League are still in their own hands.

On his reaction to the game and the result…

We were close, but in the end we couldn’t get the three points and that’s how it is. As everyone could see, it was a difficult game, Southampton played in a specific way. A lot of people might say that everybody will now play here like this, but it will not be like this and if it is, we have solutions. We had them today, but you need to score at one moment and then they’re open and then we can do other things. They were very disciplined and very deep; we defended their counter-attacks much better than we did against Crystal Palace, for example.

In the end, it’s all about finishing or scoring one and we couldn’t do this. It made life not easy in the game. We tried until the end, but today was one of those days. Now we have only one point more, we wanted to have three points more, but it’s not the end of the world. It’s not exactly what we wanted and we are really disappointed about this, as you can imagine, but we will keep on going.

On the delay before Milner’s penalty was taken…

I really don’t like it, even after we only drew, to make now a story of it. You saw what happened, so you don’t need my say on it. It’s not how I understand how you should handle a situation like this. On one hand people will say it was very smart because Millie missed, but on the other people will say it’s not how sportsmanship works. It is how it is. It took a long time, it’s not nice, but in the end two yellow cards for them. But with this delay and the time play of Southampton - I don’t know how long Forster needed altogether for his kicks - four minutes [added time], I have to say that’s ambitious. But obviously I have nothing to do with it, I can’t decide and whatever we say, you always look then like bad losers or whatever. You saw it, write it and then if nobody reads it then obviously it’s no issue.

Before the game we needed three, and obviously now I would say two would not be bad. It really makes sense that we are really concentrated on West Ham. They are also in a positive season-finishing mood - no pressure anymore, they try to get results somehow. Everyone saw the Tottenham game; Tottenham had the pressure and had to make the game, then they [West Ham] make the counter-attack and they scored and Tottenham couldn’t come back, so that’s part of football.

We are still fighting and nobody has given up or something like this. I spoke immediately after the game to the boys - I cannot and don’t want to take away the disappointment, but what I can say is that we have one point more than before. The best manager I’ve ever had, the most experienced and in much more difficult situations said always that at the end of the season, this point will be really valuable, and I believe in this so we will see. But now we have to analyse this game. It’s pretty much already done, but we will do it one more time and speak about it and then we start the preparation for the West Ham game.

It’s not what I want. First of all, I think to be successful you have to have kind of a fortress at home, that’s very important. We have been for a long period I would say, maybe Southampton [in the EFL Cup] was the first game we lost after a long period without losing at home, and now we’ve had a few results that were not that good.

I know nobody wants to hear it, but I will be brave enough to say: The pitch was really dry. We gave it all the water we had, then after 15 minutes it was really dry with the wind. It was difficult, you could see it, a lot of passes you thought ‘why are they playing this?’ but it was difficult. In a possession game you need to have the best circumstances if possible, especially in a home game. Today we couldn’t have this. It’s nobody’s fault, it’s only a description.

It’s not nice to drop the points at home, but now we play away and then we have another home game. We still enjoy playing at home - it’s only a mental issue, if you want, when you think it’s one. We don’t see this. The boys like it here and like playing in front of their crowd and that’s all. Today I thought the atmosphere was really good, the people were really in the game, everybody tried everything and in the end it didn’t work out finally, that’s all.