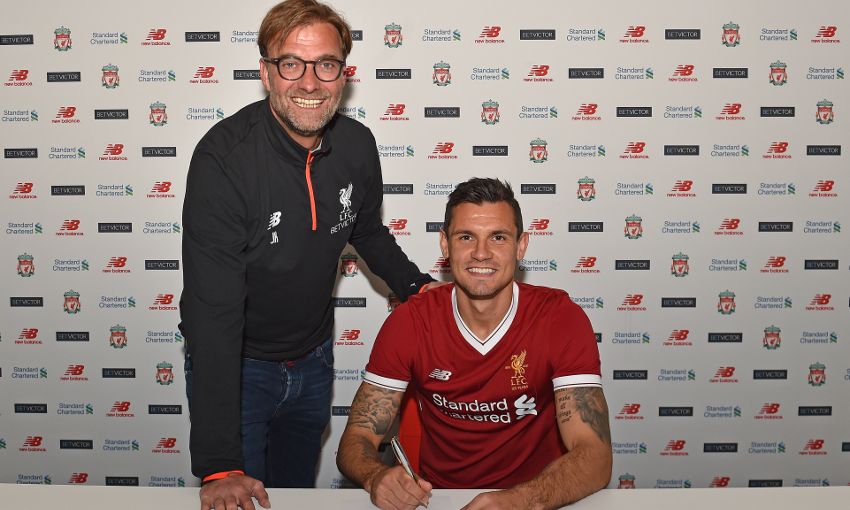 Jürgen Klopp believes Dejan Lovren has ‘all the assets’ needed to help bring success to Liverpool – and the boss expects more to come from the defender after he penned a new deal today.

The No.6 signed a long-term contract extension with the club at Melwood, almost three years and 105 games on from joining the Reds from Southampton.

Lovren followed Philippe Coutinho, Joe Gomez and Adam Lallana in committing his future to the Reds in 2017, with Klopp eager to retain the core group of players progressing under his guidance.

In the case of the centre-half in particular, the German anticipates further improvement in the coming seasons – not least because of Lovren’s desire to secure the silverware that has eluded the team in his Liverpool career so far.

“Dejan is a big presence for us on the pitch and in the dressing room – this is wonderful news that he has committed to LFC for such a long time,” Klopp told Liverpoolfc.com.

“It is our intention to build this squad around the great talent we already have. We want to keep our core together. I am really pleased Dejan has become the latest to recognise that Liverpool is a place where players can achieve their dreams and goals.

“He is an outstanding defender and someone who, I believe, still has his best times to come as a player. He has all the assets a top centre-half needs in the modern game.

“He has already enjoyed some great moments at this club, but he, like all of us, is hungry to win trophies for LFC. I love this hunger and desire and look forward to seeing it translate to great performances for the team in the coming years.”