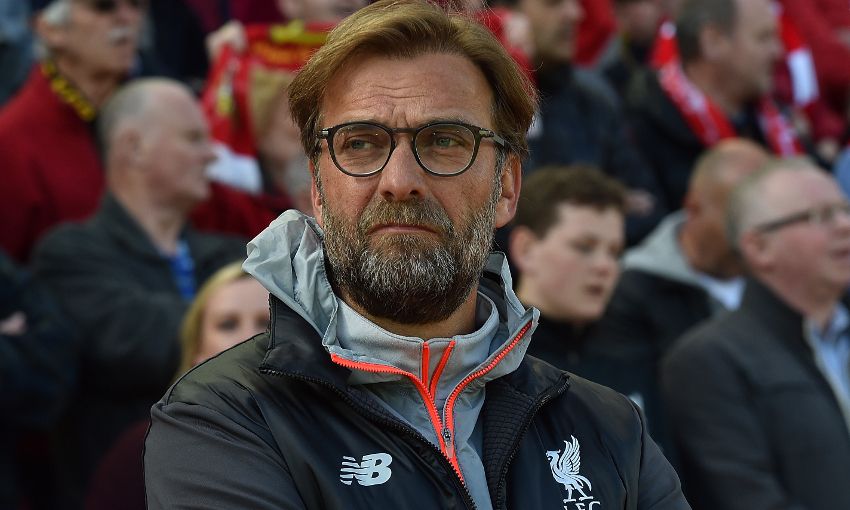 Jürgen Klopp admitted Liverpool's disappointment at seeing their top-four hopes dented by a 2-1 defeat to Crystal Palace at Anfield, but stressed they cannot dwell on the frustration with a quartet of games left to play.

The Reds’ seven-match unbeaten run was brought to a halt on Sunday afternoon as a Christian Benteke double overturned Philippe Coutinho’s opener from a free-kick.

After the game, Klopp accepted his side were guilty of committing errors that led to their defeat, but insisted they must learn from it and move on as they continue to chase Champions League qualification in the final weeks of the campaign.

I said it before the game and we knew it before the game – Crystal Palace are a really strong side with a specific [way] of playing football. Three things they do. The first long ball from Hennessey was obviously a really long ball. If they win this long ball then it’s already dangerous. If they win the second ball but cannot go through, they play on the wings and cross to Christian Benteke. The rest is counter attack. Good and strong in this, quick players and all that stuff. We knew it. We dominated the game with all the threats around – each ball you lose could be a counter attack, each ball Hennessey has or another player has is immediately a long ball. Benteke and this long ball, you have to defend really clear because if you don’t then it’s a foul and wherever it is, it’s again a set-piece from Hennessey or another player. But we did well. It was not perfect, of course not.

It was not the most exciting game but we all have to learn that these games are not exciting. If you open it with 1-0, which we did, and you can then score the second, then the opponent maybe changes style of play and in the end there are spaces which they are not used to giving away, and you can use it. We couldn’t, because we gave them the opportunity out of nothing to score the first goal. One long ball, one cross and Benteke alone in the box – there is no excuse, nothing good to say about this moment. You could see immediately their confidence grew in this moment, they started playing football. It was only two minutes because of the half-time whistle. But we knew all the things we did, passing these balls between the lines, we had Roberto and especially Gini and Phil – a lot of times between the lines they could turn. We could have used these balls a little bit better, we wanted to involve Divock a little bit more because Divock made good ways but we didn’t play in this line. If they want to win the ball, it’s a foul if Div does it in a good way. It would be a threat for them also, we could see with Phil’s free-kick ability.

We did it again out of nothing, we gave the corner away. This corner is now really strange. I know how often we spoke about set-pieces but we cannot speak about defending set-pieces – if we hit the ball at the first post then it’s a bad corner. We didn’t hit it, so it’s a goal, that’s how it is. It made the game not easy. We had to go again, we changed a little bit, the system, we brought wingers with Trent and Alberto to make the game wide. We had Marko on the pitch as another header, a threat. And wanted to have Roberto in the box, and Gini and Phil around for second balls. But how everybody could see, especially in added time, we lost a little bit of nerves, it was not clear anymore. We gave them the opportunity to win these balls too easy. We had not a good formation for second balls.

So we couldn’t create the most chances in the last five minutes, but before we had Roberto in the box, we had Phil in the box – you can tell me if it’s a penalty or not. Everybody told me yes, if he goes down it’s a penalty; if he doesn’t go down it’s not a penalty. Maybe we should think about this – honesty and desire is punished. Not sure that makes sense, but it happens. At the end, we tried everything, not at our best but it was not about attitude. The boys tried. We couldn’t finalise often enough our effort. It feels really frustrating, of course. It’s really harsh to accept when you think about the goals and how they did it. I know about their quality, that’s how it is – their counter attacks are really good. We [dealt with] this well, but obviously not well enough.

On ensuring the Reds respond to this setback…

I’m pretty much used to nothing more in my life than to get up after a knock. Nothing has happened more often to me than this, so that’s no problem. I spoke to the boys after the game and told them that yes, it feels frustrating, it’s disappointing, we made these mistakes – that’s all true and we have to feel it today because that’s how defeats are. But they make sense, defeats always make sense. You don’t like it but there’s a reason for them – not only what you did in the game, but also how you react after the game.

We have tomorrow morning’s training [session] and then one-and-a-half days to recover from this – and we will. Then, there is one month to go; one wonderful football month with four games, so we will not give up. 100 per cent not. You could see it today, we all need to get used to it much more than we already are – in a game like this, there is not the biggest possible excitement most of the time, but nobody cares usually. Obviously we [do] care; I could see it in a few faces, I could hear it a little bit from outside. The boys have delivered a lot of this excitement, but now it’s really about serious football. Do what you have to do – and we will do. We tried to do it today, but two times they gave us an answer we didn’t want.

I’ve said it now five or six times, I know a lot of people around think now ‘Oh my god, Champions League slips through our fingers again’… only if we let it slip. We have to try everything, we will try everything. Our job is to squeeze everything out of this season that we can squeeze. Obviously it is not easy for us, but that’s no surprise.

Maybe Adam [Lallana] is coming back for the next game, which of course would help us in different situations and that’s good. We have now five or six days to train until Watford, so we will use it and then go to Watford. It will not be easy [to win] but possible and that’s enough.

On the defensive mistakes around Benteke’s goals…

Christian Benteke is an outstandingly good striker and there’s absolutely no doubt about it, but if you leave him alone like we did around the first goal then I am not sure he needed all his skills for this goal. A lot of strikers maybe would fail in a moment like this because it was probably not the easiest [chance], but we left him alone and that makes no sense. The second one, that’s our mistake and nobody else to blame for it.

On the defending for Benteke’s second goal at a corner…

I haven’t seen it again yet. It was really close, we had four players there in this space and Emre is blocking Benteke in this moment probably, but I didn’t see it. It would not be a real surprise for me if somebody had blocked Emre so Christian could go there, but if you’ve seen it again on television, I am not sure.

It’s a low cross and Millie knows that he usually hits the ball, that’s his position and he shoots it away and then it’d be a bad corner. Benteke usually gets the ball two metres and 50 high, but for this one he had to go on his knees. But it’s not important, it’s our mistake. We take responsibility, I take responsibility for all of this. In this moment I already want to strike back but I can’t because I have to wait a little bit [until Watford]. We will use the time and try everything to make the best of this season. Today it feels really bad, but it only has bigger influence [if we let it] have bigger influence.