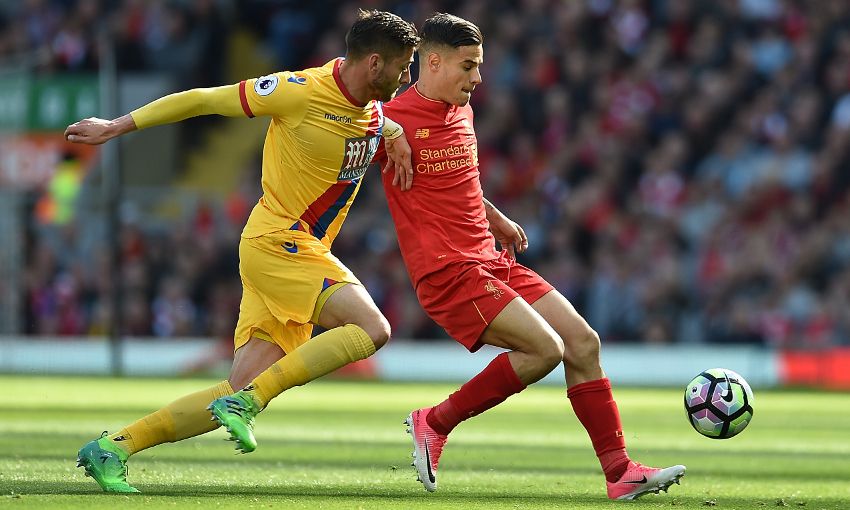 Liverpool suffered a blow in their race for the Premier League top four with a 2-1 home defeat against Crystal Palace on Sunday afternoon.

Philippe Coutinho’s 10th league goal of the season – a stunning free-kick curler midway through the first half – put the Reds ahead, only for Christian Benteke to restore parity on his return to Anfield.

Jürgen Klopp’s side created several chances after the interval but were undone by Benteke again on 74 minutes, the Belgian heading home a low corner across the box to win it for the visitors.

Pre-match, Klopp was boosted by the availability of both Lucas Leiva and Joel Matip, meaning the manager could name an unchanged line-up.

There was a notable new name on the bench, though, as Academy striker Rhian Brewster joined the substitutes after a season of outstanding progress with the U18s and U23s.

There was a bright, open start under a bright, warm sun at Anfield, though the breakthrough final touch proved elusive at either end in the opening exchanges.

Palace arrived on Merseyside with five wins from their previous seven games – including victories over Chelsea and Arsenal – and with pressure added to their attempt to avoid relegation by Saturday’s results.

And former Reds forward Benteke was worryingly close to putting the Eagles in front with 21 minutes on the clock.

The Belgium international collected the ball in the left channel and rolled past Lucas, strode around Matip and swept a low effort slightly wide of the far post from the edge of the box.

Instead, it was Liverpool who took the lead.

Neat footwork from Coutinho outside the Palace penalty area drew a clumsy foul by Luka Milivojevic, and the No.10 took command of the free-kick opportunity to brilliantly curl a shot over the wall, beyond the reach of Wayne Hennessey and into the top left corner.

The visitors were rattled by the concession and Divock Origi might have done better with a glancing header before James Milner snuck into space from left-back and was dispossessed by Jason Puncheon as he shaped to shoot.

Emre Can miscued a clear chance seven minutes before the break, too.

Georginio Wijnaldum completed a clever one-two on the left flank with Milner, who slipped a pass through Joel Ward’s legs for the unmarked Dutchman to square for his midfield colleague – but the strike was scuffed harmlessly.

And in the closing moments of the half, Palace equalised.

Yohan Cabaye latched onto a clipped ball into the right channel and quickly cracked an inviting delivery across the face of goal, where Benteke was waiting to slam a finish into the roof of the net.

He then sent another effort too close to Simon Mignolet as Sam Allardyce’s team ended the first half with momentum behind them.

Coutinho had already driven a left-footer over the bar before a passage of play unfolded that the Brazilian will still be baffled did not conclude with his and Liverpool’s second goal.

A fast-paced dribble reminiscent of his effort in the Merseyside derby earlier this month carried him within yards of goal, saw Martin Kelly perhaps commit a foul and James Tomkins eventually block Coutinho’s blast as he lost balance.

Lucas almost picked out the perfect assist to Roberto Firmino as the hour mark approached, but his compatriot was caught between passing and shooting as he bore down on goal – giving Hennessey chance to rush out and claim.

Palace may have felt they had weathered the storm as the final 20 minutes began and more composure from Cabaye on the volley – following a scramble in the Reds box – would have edged them ahead.

They did take the lead with 74 on the clock, however. A low corner from the right wing towards the near post bounced through kindly for Benteke, who was clinical with his header past Mignolet.