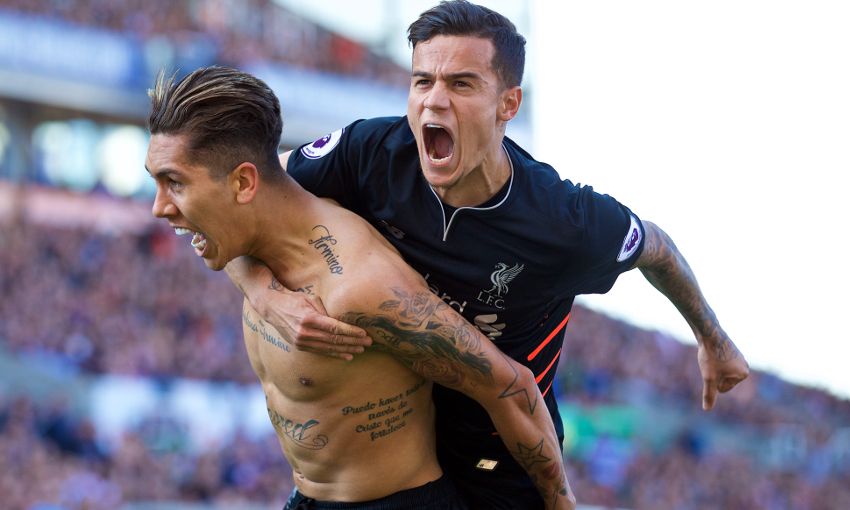 Philippe Coutinho and Roberto Firmino cannot make the kind of 'fantastic' impact they did at Stoke City without the help of their teammates, Jürgen Klopp has explained.

The Brazilian duo helped overturn a one-goal deficit at the bet365 Stadium last weekend after being introduced from the bench at the outset of the second half.

Coutinho levelled the score with a cool finish and Firmino then secured all three points for the Reds with a sensational blast into the roof of the net moments later.

Klopp is delighted that Liverpool can enjoy the benefits of the forwards’ close connection on and off the pitch, but at his pre-match press conference on Thursday took time to highlight how the overall team performance allows them to flourish.

“It’s very important that players can play together, but if they are only two then it’s pretty difficult still,” the manager said ahead of the trip to West Bromwich Albion.

“Gini Wijnaldum said it after the game, I think – yes, they had a big impact on the game, that’s 100 per cent true, but the whole team played better in the second half.

“But with all playing better and these two highest quality players on the pitch, we could change the game. That was fantastic, really good.

“But, again, if they tried to do it alone, [they would have] no chance. It’s about fitting in the game, fitting in the team and obviously they are that good that they would fit in nearly each team. It’s good to have them here.”

The comeback at Stoke kept Liverpool on course to complete their objective of a top-four position and qualification for next season’s Champions League.

When asked whether he has a certain points total in mind to achieve that feat, though, Klopp refused to look beyond the task of claiming a result against West Brom.

“What we can probably say is that if we would win all the rest of the games then we would be in the Champions League.

“I think it’s pretty sure – even when a few teams have [played] less games than we have, because they play at a few different points against each other. So they cannot get all the points. That’s it.

“But it will be difficult enough, so no, I don’t think about this. The challenge of West Brom is big enough and has all our respect and all our concentration. That’s what we are doing.

“It’s a normal or even a little bit longer training week, so we thought it makes sense to use it and prepare really well on this game. That’s what we did – yesterday, today, tomorrow, Saturday, and then going to West Brom and trying to be at our best.

“We should be at our best, because West Brom have played an outstanding season. OK, the last two results, or maybe three results, I heard they didn’t score or whatever, but [it’s] nothing we should think about.

“But we’ve nothing else to do, so we go there and we want to show again that we have really big targets this season, we want to go for it and we’ll really fight for the result. If we can do this then we have a chance. That’s the only thing I think about.”

Inside Pre-season: Behind the scenes of Reds' opening Austria friendlies