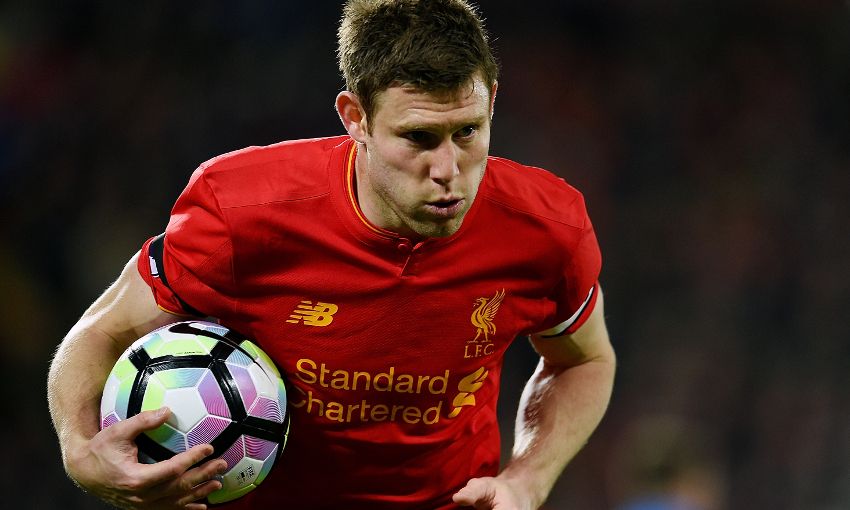 James Milner sees no shortage of desire in the Liverpool squad to complete their objective of Champions League qualification in the final six games of the season.

Saturday’s 2-1 victory at Stoke City consolidated the Reds’ position in the Premier League top four, coming off the back of dropped points at home to Bournemouth.

Milner and co had to battle back from behind to secure the win at the bet365 Stadium, with Philippe Coutinho and Roberto Firmino helping to change the course of the match after being introduced from the bench for the second half.

The vice-captain believes the turnaround offered proof of the team’s mental strength - and he wants that resolve to be used further as they navigate their remaining fixtures.

“The position we are in means it is irrelevant what other teams think and do,” said Milner. “We know that if we do the business in our remaining games, it will be good enough I am sure. It is down to us.

“We don’t want to get side-tracked or have to worry about other results. Hopefully we can take care of business ourselves.

“One thing that can never be thrown at this squad is that we lack desire and a will to win and the attitude to come back again. We have done it many times and that belief to keep going and get three points is there.”

Liverpool were without Jordan Henderson, Adam Lallana and Sadio Mane at Stoke due to injury, while Coutinho and Firmino were restricted to substitute appearances because of illness and fatigue.

Milner said: “The treatment table is a busy place at the moment, unfortunately. We have proved by winning that the squad is there.

“The Brazilian lads carrying injuries, Phil being ill the other night, we hadn’t seen him for two days and he comes on and does that. Roberto is struggling.

“It was a good job it wasn’t windy because I think Phil would have blown away – he lost a lot of weight!

“I am buzzing for him, it’s fantastic, it shows what a big player for us he is and his desire to come and do that after a tough 48 hours.

“We have injuries all over the place, it is that time of the year and you just have to suck it up and keep going. Like I say, the desire and heart from the squad is always there. We just need that consistency really.”

The No.7 also supported the post-match words of Jürgen Klopp with regard to the withdrawal of Trent Alexander-Arnold and Ben Woodburn at half-time last weekend.

Having been named in the starting line-up, the Academy graduates were replaced by Coutinho and Firmino – but bore no responsibility in the eyes of the manager or their teammates.

“We probably let them down as senior guys, we didn’t play well and didn’t help them out,” Milner added.

“We managed to get going in the second half, could have scored a few more and Simon [Mignolet] made two unbelievable saves at important times in the game.”