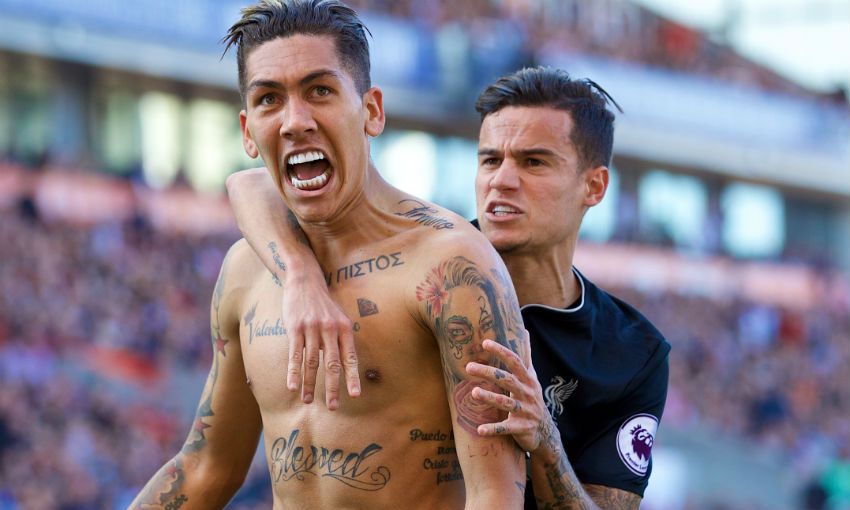 An intuitive understanding on the pitch, and a strong friendship off it - Philippe Coutinho certainly enjoys the company of Roberto Firmino, who he describes as a 'clever player' and a 'great guy'.

Coutinho and Firmino joined forces to devastating effect in the second half of Liverpool’s 2-1 victory over Stoke City on Saturday, scoring a goal apiece to overturn a one-goal deficit after being brought off the bench at the break.

With the former struggling with illness and the latter battling fatigue, the Brazilian duo were named among the Reds’ substitutes at the bet365 Stadium, but their introduction at the interval changed the course of the game.

Their celebrations in front of a delirious away end following Firmino’s stunning half-volleyed winner will live long in the memory, and Coutinho has lifted the lid on what it’s like to share a dressing room with Liverpool’s No.11 for both club and country.

“Roberto is a clever player. He makes those diagonal runs that are so important to our play at Liverpool,” the 24-year-old, who has now scored in three consecutive Premier League games, told the official Liverpool FC magazine.

“He’s always available to receive the ball on his own up there and, even if he doesn’t get a chance on goal for himself, he helps to create opportunities for us.

“We’re playing together here and we know each other well, so when we’re playing for Brazil, we’re already familiar with each other’s movement. Whenever we get the chance to play or train together, it’s great that we already have that understanding.”

LFCTV GO: Watch Phil and Bobby star in the Potteries

As well as offering intelligent and unselfish movement, Coutinho also cites Firmino’s robustness as another of his teammate’s impressive attributes.

“Roberto is a great guy. He has a lot of quality on the ball, and is physically very strong too,” the No.10 added.

“He’s not as tall as other forwards, but you can see that he’s very strong. He’s really important for us. His movement creates space for others and for him too. That’s very important for the way we play.”

Of course, Coutinho and Firmino are not the only Brazilians at Anfield, with Lucas Leiva fast approaching his 10th anniversary as a Liverpool player.

“Since I arrived at the club it’s been very important - it was important to have Lucas here at the time I first came as he speaks the same language as me,” Coutinho said.

“He’s been at Liverpool for 10 years and he’d already been here six or seven years when I joined and he knows the city very well, so yes it’s very important that we’ve got a group of Brazilians here and that we can speak our language to each other. That makes it very good.

“We bring a little bit of Brazil to Liverpool. At home I eat Brazilian foods, I have friends who come over to visit me and they bring things for me - typical foods from Brazil.

“And of course we’ve also got very good Brazilian restaurants in this city as well. I enjoy listening to Brazilian music too, although Roberto is much more the music man. He’s the guy who tends to put the music on, but we also have a lot of Spanish music too.”

Coutinho is the cover star of the latest edition of the official Liverpool FC magazine. Why not subscribe to ensure you never miss an issue? Click here for details.