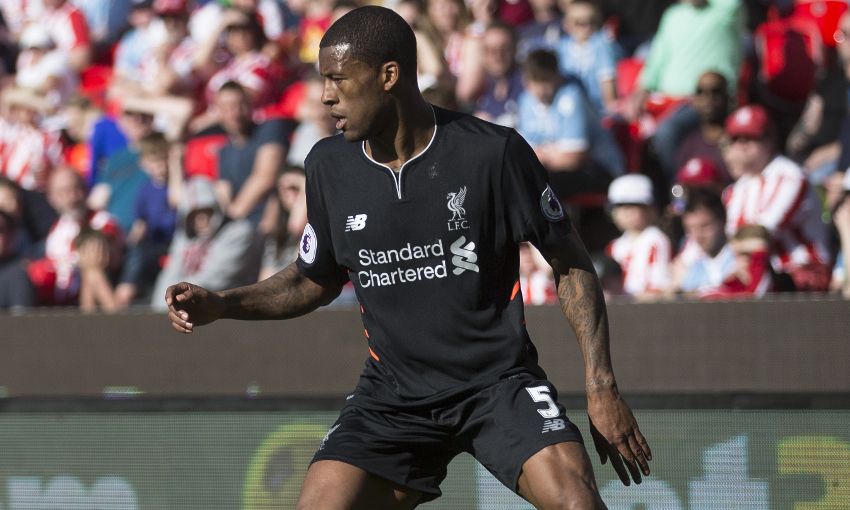 Liverpool trailed at the interval on Saturday afternoon, with Jonathan Walters’ 44th-minute header the difference between the sides as Jürgen Klopp’s team adapted to a different formation at the bet365 Stadium.

They continued with the new system in the second half, though with Philippe Coutinho and Firmino introduced from the bench, and successfully upped their game to produce a crucial turnaround.

The substitutes were the goalscorers, too, as Coutinho’s cool finish levelled the match before Firmino summoned a sublime strike moments later to secure three points.

Wijnaldum was as impressed as anybody by the genius of the No.11’s decisive goal, but on an afternoon when Simon Mignolet also made two incredible saves, the midfielder pointed to the efforts of the entire team.

“[They were] really good goals, especially the second from Roberto. The way he made the goal was quality, pure quality!” the Dutchman told Liverpoolfc.com.

“I don’t think it was only because of the substitutions, but of course Phil and Roberto made a big difference. They scored the goals and they helped the team to win the game.

“It is normal people will say it’s because of the substitutions but I think it’s also because the whole team worked hard to get a win.

“It’s a really big win, and also because we dropped points on Wednesday against Bournemouth. We wanted to do better in the next game and it was a good game.”

On the change in performance level from first half to second, he added: “We didn’t play football [in the opening 45 minutes] and [the system] was new for us.

“In the second half we played more with the wing-backs instead of dropping deep, so I think that was the biggest difference between the first and second half.”

Liverpool were without the likes of Jordan Henderson, Adam Lallana and Sadio Mane against Stoke, while Coutinho and Firmino were limited to substitute appearances due to illness and fatigue respectively.

But the hard-fought win means the Reds remain in a strong position with six Premier League games to go – and Wijnaldum is hopeful those who are fit can maintain their condition until the end of the campaign.

“We have to take it game by game and we just hope that no-one [else] gets injured because a few players are already injured,” the No.5 said.

“Sadio, for example, cannot play this season anymore and we hope Hendo and Adam are going to be fit soon, but we will have to see.

“We have to do everything to stay fit and hopefully the guys who are injured are going to be fitter than this moment.”