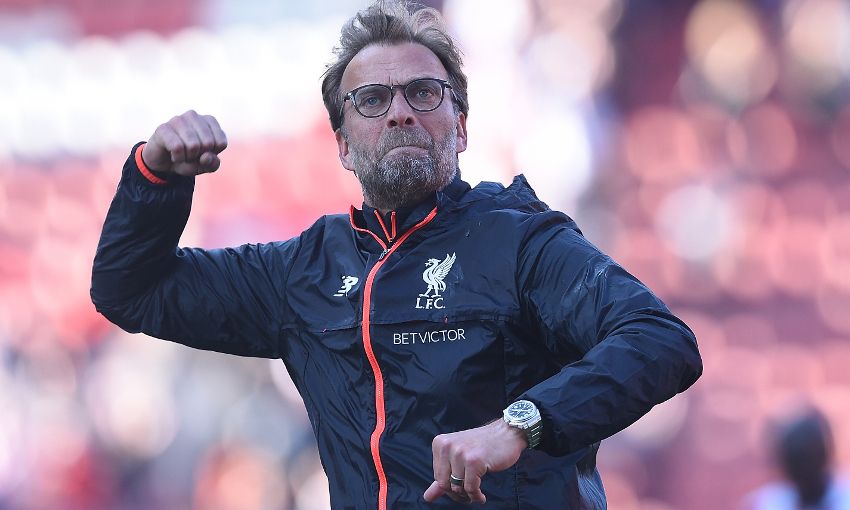 Jürgen Klopp was left savouring what he hailed as a 'very important victory' for Liverpool after they came from behind to beat Stoke City 2-1 at the bet365 Stadium on Saturday.

The Reds found themselves trailing 1-0 at half-time to Jonathan Walters’ late header in the first period, and elected to bring on Philippe Coutinho and Roberto Firmino in order to serve up a response after the interval.

Indeed, the changes had exactly the desired impact as the visitors immediately took control of the game – and duly drew level when Coutinho swept home a loose ball inside the area on 69 minutes with an unerring finish.

And supporters had barely had time to finish their celebrations in the away section of the stadium when Firmino lashed in a second goal, meeting Georginio Wijnaldum’s ball forward with a thumping half-volley from the edge of the area that crashed into the back of the net.

Afterwards, Klopp reflected on his side’s performance in his post-match press conference, explained the decision to start with Ben Woodburn and Trent Alexander-Arnold over Coutinho and Firmino, and heaped praise upon a magnificent display from Simon Mignolet in goal.

On his overall view of the game…

It was very, very important for us. For different reasons, it was really difficult. Stoke is a difficult place to play, to come here it’s really difficult to take the points. In our situation, we knew before it is much more difficult but we still thought it was possible. The first half was actually not as good as we thought it could be. They were two completely different halves, obviously. We had to change the system; we couldn’t train it really. I don’t like it too much but the situation forced it. We couldn’t train it and that’s what everybody could see. But defending was not a problem. I thought defending could have been more difficult, but that was not a problem. We didn’t defend like we usually do – we couldn’t play high pressure, so we had to stay a little bit deeper, but they didn’t create a lot of chances. They scored a goal. This situation was not a question of system, it was only losing two challenges – the first and the second… goal.

Then, half-time, it was a difficult decision to make because it was not clear that Roberto and Phil would be ready for 45 minutes. Roberto, after the last game, a guy who usually never says anything about how he feels, said ‘I’m really done’. After two games for Brazil, last game after injury played Man City, flying immediately to Brazil, played there, in his situation tried to convince the people, coming back and playing the derby immediately… So he was now at a point where it was clear if we tried to bring him through 90 minutes it would cause us real problems. Phil lost three kilos in the last three days. For most of us that would be good news! But for Phil and a professional football player, it is not as good. He came to the hotel this morning and said ‘I’m fine’. But we knew he would have a low energy level, full enough for 30 minutes.

Watch: Highlights of the brilliant comeback

We had to fight. And we needed Simon Mignolet with two outstanding saves – the second one was one of the best I’ve ever seen, Save of the Day, Month, Year. It was outstanding, well deserved for him because he has got a lot of criticism in his Liverpool career. Sometimes these are the moments you need as a player, and for us as a team we need a goalkeeper in a moment like this. We scored two fantastic goals and played football in the second half. In the first half we didn’t play football; it was not because of Trent or Ben, they were not even involved because we [played] always long balls, we tried to find Divock.

Obviously nobody really felt comfortable in the system. We saw this, [but] we couldn’t change the system really in the second half. We did a little bit but only offensively, still playing with three at the back, changed Clyney and Millie from the side and all that stuff, but we played much better football between the spaces, created chances, scored fantastic goals and had luck and a fantastic goalkeeper in two situations. We had maybe more situations in the second half, so I thought it was deserved. It was lucky for us, of course, because of the first half but in the end it’s deserved and we are completely happy and fine with this game.

Usually I would be but we have such a close relationship. All the players went in the dressing room and didn’t celebrate and the boys, they didn’t look like it’s the best day of their lives. It started like this but didn’t end like this, that’s life. They don’t have to react like adults and they can be disappointed, we will help them more than we help anyone else, but everything is fine – it’s not about them, it was not them.

We didn’t use them, they were not involved in the game. There were two or three situations – if it’s a penalty on Ben, which I thought it was, then he did the job because he got into a situation in the box where the opponent cannot win the challenge without making a foul. But it’s not their job to be the best players on the pitch. They have outstanding talents, they are fantastic boys, our boys, so everything will be good. It didn’t feel like I want to do it more, or every week, but that’s the job.

On being delighted for Mignolet after his two outstanding saves…

I am, absolutely. It’s what you wish for. Defending is about organisation and everything, but the goal we conceded – we lose one challenge and they run in behind and the cross [comes in], it was pretty similar to the goal we conceded to Stoke at home, a header in the near-post area. It was a big chance from Arnautovic, when he could run in behind and immediately with his pass, the fantastic sliding of [Berahino], and then this reaction, that’s what you need to be successful, your goalkeeper to make saves like this. You can’t expect it each week, but when he is doing it, then it’s like scoring a goal.

[If we had started them] as we understood it, the possibility would have then been pretty high that we would have to change after 30 minutes. We have a lot of numbers, we have different things we get from sports science and everything, and this was the moment when each alarm clock was ringing for both, if you want. If you lose 3.1 kilos [it will be tough]. You saw it in the second half – brilliant, brilliant and then [after] half an hour, it was really difficult. It was not the plan to change twice at half-time, but if we’d started them then we’d have had to [anyway]. With offensive options, it was difficult. For Daniel, half-time, it was really long in the moment in an intense game like this, so it was difficult to find the right solution. Maybe I am lucky in the end that it worked out, but I thought a lot about it and even when nobody really understands it, it was my decision. And the solution, I found it. I thought we could have played much better than we did; it was clear we wanted to bring them, but [for] only half an hour made absolutely no sense. But [if the score] was still 0-0, then they could decide the game. They had to do a little bit more work.

Massive, it’s absolutely massive. That’s how it feels. We have won a few games this year, but this was really special. Today you could feel it immediately in the dressing room… immediately everybody was like, ‘That’s very important!’ Of course, we have to prove it next week and then the next week and then the next week, that’s how it is, but it feels outstandingly good in this moment. I can imagine Stoke feel exactly the opposite because they were really close to points today – maybe all three, maybe one – but in the end, we all worked really hard for the three points and we got them, so we are happy today.