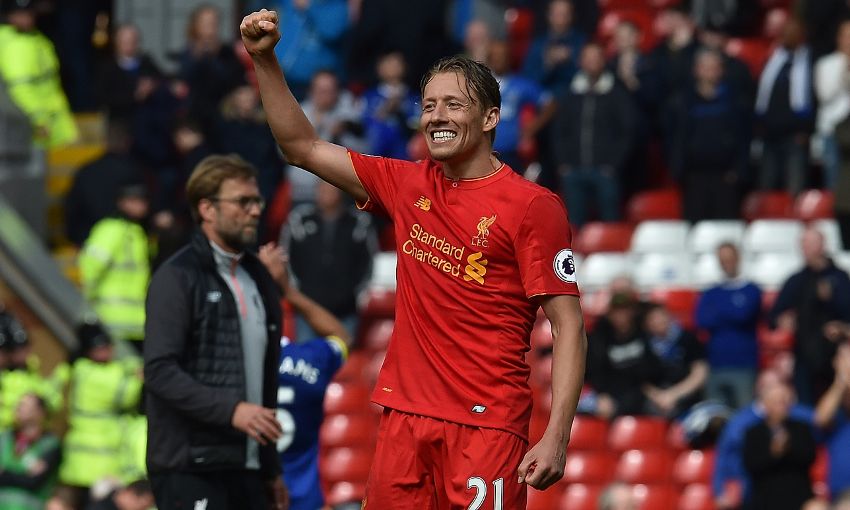 A decade's worth of Merseyside derbies has not muted Lucas Leiva's delight about winning them in the slightest.

The Brazilian stepped into the Liverpool team for the 228th edition of the fixture on Saturday, taking up a midfield berth in place of the injured Adam Lallana at Anfield.

And goals from Sadio Mane, Philippe Coutinho and Divock Origi ensured it was a match to remember for Lucas and all connected to the club, with the Reds keeping up the pace in their battle for a top-four position.

“It was a big game for us, a derby at home. It’s always special – and even more when we win,” he later told Liverpoolfc.com.

“We had a very good game in difficult circumstances, because we had a lot of players coming back late with a little bit of jet-lag.

“Fair play to Phil, Roberto [Firmino] and Sadio – they were outstanding. We only really had a day to prepare for the game, but we all knew the importance of winning the derby and climbing up the table to fight for the top four.

“We know how much it means for the fans – we kept Liverpool red.”

LFCTV GO: Lucas on the meaning of the derby and being back in midfield

The absence of both Jordan Henderson and Lallana meant a switch into midfield for Lucas, who has more commonly been deployed as a centre-back this season.

It was a chance the No.21 accepted happily and he hopes to have done enough against Everton to retain his spot in the side when Bournemouth visit Anfield on Wednesday.

“I’ve been playing a lot at the back this season and not many times in midfield,” said the 30-year-old.

“But it was an opportunity for me and as a whole, I think it was quite good. Of course, you feel the intensity a little bit towards the end of the game. But that’s part of the game.

“Now we need to celebrate because it’s a big game and a derby, and [from Sunday] we need to focus already on the next game and recover well.”