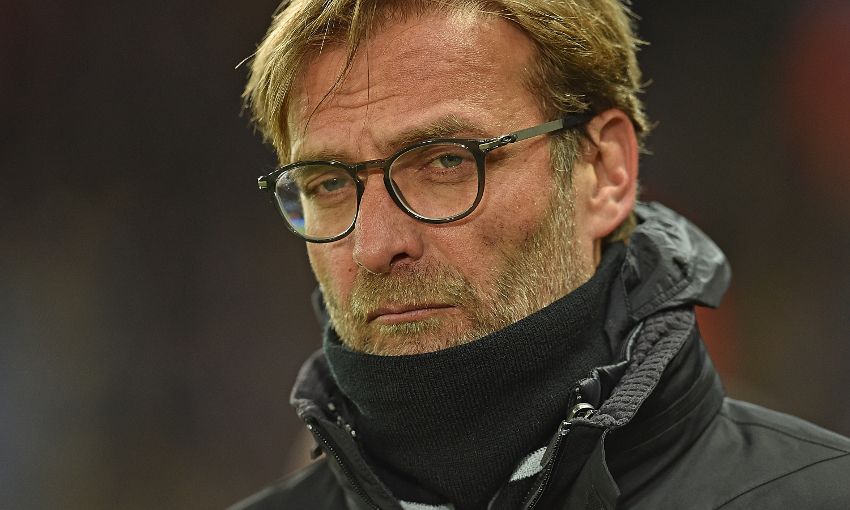 Jürgen Klopp delivered a frank assessment of his side's performance after Liverpool were beaten 3-1 by Leicester City at the King Power Stadium on Monday night.

On an evening to forget for the Reds, they found themselves two goals behind at half-time, following goals from Jamie Vardy and Danny Drinkwater.

Any hopes of staging a second-half fightback were dashed when Vardy headed in a third for the Foxes on the hour mark, and though Philippe Coutinho netted a consolation for the visitors, Klopp acknowledged his side were well below the standards they’ve set themselves this season.

Read on for a transcript of the manager’s post-match press conference.

On his overall assessment of the result and performance…

The first goal was like a friendly game, a player down, throw-in, header, one pass – and if you really have to do that little to be free in front of our goalkeeper, that’s not cool. Obviously in this moment we were not ready for the situation. The second goal, how many throw-ins did they have in a similar area? It looked like 20, each of them was dangerous. It was clear in one moment they could score and they did, [with] maybe the most difficult one they scored.

So at half-time, we changed the system and that made it a little bit better, but it was clear Leicester defended now when we came through on the wing, we had the situations when the crosses were then not good enough, the movement… how it is in a game. It’s not really likely that out of nothing, you play from one second to another your best game. That’s why you have to develop a game; you have to start good, get better and finish it world-class in an ideal world. It was difficult. After we conceded the third, we scored a goal and we had the chances but it would not make the game better if we scored a second one.

For us, it is very important to say we cannot blame anybody else for this performance – it’s only our responsibility. That doesn’t make it better, but we don’t want to look for excuses. The job we have to do is to react again on it and then react, react and react. What happened tonight has happened too often this season already. Everybody who has followed us over the whole year knows how good we can be, so that makes it even worse to accept a performance like this tonight. It’s easier in a foreign language to talk about victories than about defeats, so there’s nothing more to say actually. I am not sure I can explain it better.

On his side’s inconsistency since the turn of the year…

Consistency is to do what you have to do always. We’ve brought ourselves into a situation where everyone can doubt our attitude. That’s really our fault, our mistake and nobody else’s. I cannot change the result now but the only thing we can do again is to work on it because you have no other solution. You have to work on it and show again, show again and show again. The most important thing is that everybody who is with us, likes us and wants us winning needs to see – and has a right to see – that we only play football for one reason and that’s for winning. Even I couldn’t see this tonight and I knew we were here because we wanted to win. So, that’s a problem. There’s not a lot more to say, but a lot to work on.

I am not sure, but one year ago we had a game every three days and sometimes we had to use this as an excuse. I think that makes more sense to use it as an excuse because when you have injuries and then a game every three days… Now, 16 days [without a game] is not perfect for rhythm but for defending you don’t need rhythm, for defending you need organisation. It was not the job to win the game in the first half – it was the job to win the game and if it is 0-0 before half-time then maybe the crowd will change a little bit. It’s possible if they cannot create chances, that we will have chances. That’s clear because we always have chances because we can play football. Being 2-0 down doesn’t help, being 3-0 down doesn’t help. Maybe it looked like at the end that a few players struggled with rhythm but I don’t want to use it as an explanation or an excuse.

On a shared responsibility…

We get judged every day, especially on matchdays, and of course performance has influence on these things, that’s how it is. I don’t think they are not as good as I thought they are, but I think they need my help more to show it every week. I said it a few times before, when we lose I feel maximum responsibility because I am [responsible]. All I say now, I hope I always use the word ‘we’ and not ‘they’ or ‘the players’ or whatever, because I am involved in this. It’s not the moment to make assessments like this, especially not in public, but to say the truth – and I try to say the truth as often as possible – bad performances don’t help anyone. That’s clear.